Popsicles blends sweet pop music with a chill environment, creating a musical treat for everyone

Popsicles blends sweet pop music with a chill environment, creating a musical treat for everyone 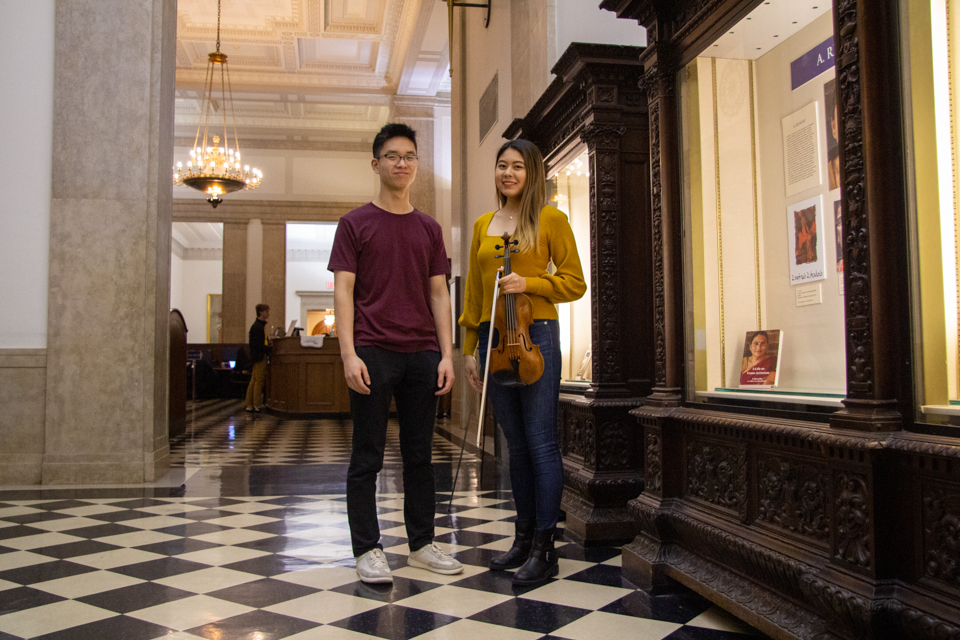 Popsicles has performed in genres that range from alternative rock to R&B.

“Take On Me” by a-ha and “thank u, next” by Ariana Grande do not sound like the songs typically played by classically trained musicians. For Popsicles, however, it’s all fair game.

Although it began as an unofficial offshoot of Columbia Pops, the definitive orchestra for pop-oriented music on campus, Popsicles has recently refashioned itself into a full-fledged organization. It operates as a loose collective of ensembles—small groups of musicians with a drive to delve into styles that are not typically explored with classical instruments.

Popsicles has played at numerous student events across campus, including Glass House Rocks 2018 and this year’s cultureSHOCK.

Like Columbia Pops, Popsicles is entirely student-led, and its repertoire places emphasis on pop culture music. It is currently co-directed by Samuel Wang, CC ’20, and Ria Honda, CC ’22, two violinists who sought to create a loose and collaborative musical environment within which different subgroups form organically.

“What ends up happening is small groups start to form on their own,” Wang said. “For example, when I came in my freshman year, I and two of my friends just decided to be a group. More often than not, people just say, ‘Hey, come play with us,’ and it happens.”

“One of the best things about [Popsicles] is how collaborative it is,” Honda added. “We are very open to new ideas in terms of song choices. The process is really fluid.”

Popsicles has attracted a plethora of skilled musicians. It is not uncommon to witness a cellist playing with a flautist or a saxophonist at any given performance. These experimental instrumentations are just par for the course for these musicians.

Collaboration and fluidity are at the heart of Popsicles. Far from a traditional chamber group or orchestra, Popsicles ensembles are primarily directed by the musicians themselves. Wang boiled down the responsibilities of co-directing to “responding to performance requests.”

“When we’re working in a group, it’s not a hierarchical relationship at all,” Honda explained. “We also play in Popsicles and have been lucky enough to play in a lot of the events that we’ve been invited to be a part of.”

Popsicles’ fluidity also seeps into its repertoire. The group’s flexible spirit can best be observed through its music, which utilizes classical techniques to refashion the catchy pop melodies and searing rock riffs of modern music.

As far as arrangements go, Popsicles has dipped its toes into everything from alternative rock to R&B. It often leans on the ingenuity and personal tastes of its members to develop new material for performances. When conceiving of new arrangements, members of Popsicles often think, “What will shock our audiences?”

“That’s all we’ve ever done,” Wang said, laughing. “Every time we play a piece of music, we’re like, ‘Dude, audiences aren’t gonna expect that.’ They’re gonna be like ‘Oh shit, what’s happening?’ That’s our goal—to produce that moment and reaction in our audience.”

Popsicles’ groups are often successful in this goal. Last year, Wang wrote a cover of “Halo” by Cage The Elephant, a choice inspired by his “high school angsty phase.”

Overall, Popsicles’ foundation is its musicians and the bond they share through music. Though they hold leadership positions and understand that they must shape the organization’s structure, Wang and Honda prefer to separate their authority from the group’s music.

“At the end of the day,” Wang concluded, “We’re all just trying to have fun.”