‘There’s bluegrass in New York?’ The answer is yes, and James Kerr’s class brought it to Columbia

‘There’s bluegrass in New York?’ The answer is yes, and James Kerr’s class brought it to Columbia 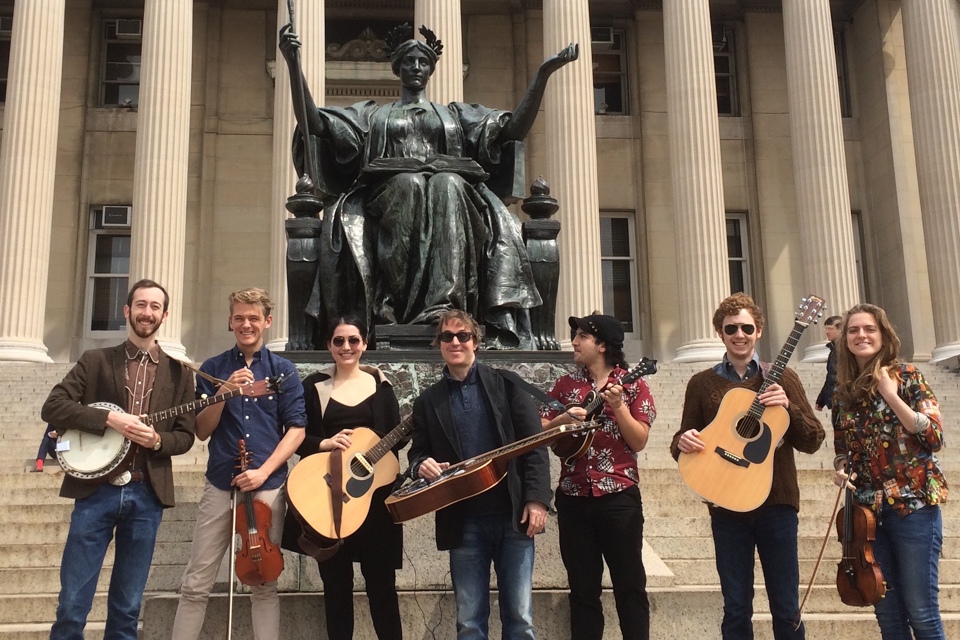 Bluegrass musicians play a variety of instruments including the Dobro, a type of guitar dating back to the '30s.

Every Wednesday night, on the eighth floor of Dodge Hall, a soft banjo sound envelops the hallways as students gather for weekly rehearsal. This is the setting of James Kerr’s bluegrass ensemble course, a class that endeavors to learn about bluegrass music and develop a setlist of traditional bluegrass songs to be performed at their end-of-semester concert.

Kerr, who holds a doctorate in classical guitar performance, has been leading Columbia University’s Bluegrass Ensemble for the past five years. The ensemble is made up of students from across the University, and though the group is mostly comprised of undergraduates, Kerr has also taught doctorate and master’s students. No matter their academic endeavors, however, the students have one thing in common: They all share a curiosity about bluegrass music.

While some students have been dedicated bluegrass instrumentalists for years, others are completely new to the genre. Kerr aims to create a space that is welcoming for all, regardless of the students’ experience levels, and even engaging as a member of the group by playing the Dobro—a guitar-like bluegrass instrument dating back to the ’30s. The Dobro achieves a louder, more sustained effect than a guitar, projecting over a band through a resonator cone located inside of the instrument.

The bluegrass ensemble is considered to be a world music ensemble under the umbrella of Columbia’s music department; they engage in various performance opportunities throughout the academic year. In recent years, the group has performed concerts on Low Plaza, participated in the annual Riverside Park Concert series, and even been invited to perform at formal parties hosted by University President Lee Bollinger.

This fall, however, is a bit different, as many central members of the group graduated this past spring.

“We had kind of a core group of quite skilled players, two or three of which were with me for four years, the whole time they were here and then, sadly, graduated in the spring. So we lost our lead singer, and a fiddle player we had for a long time, and a really solid bass player we had. So it's been a bit of a kind of rebuilding year,” Kerr said.

Due to the relative lack of expertise, the fall Riverside concert series this year did not feature an appearance by the Columbia Bluegrass Ensemble.

Despite this challenge, Kerr maintains a positive outlook and is excited to take on the challenge of ushering in a new era of bluegrass musicians to Columbia.

“We’re gradually kind of putting it together, and it’s always a fun challenge to see what we have to work with and to kind of create a setlist, and put together a concert program based on people’s different skill levels,” Kerr said.

For Kerr, it was the notion of challenge that attracted him to bluegrass in the first place. Like many of his students, Kerr did not begin to pursue bluegrass in earnest until his college days, prior to which he had studied classical and jazz guitar.

“The element of improvisation in [bluegrass] definitely appealed to me … it’s by no means a simple music to play. The tempos are often quite fast, and playing it with the right rhythmic feel and a good sense of timing is really the challenge for playing it well,” Kerr said.

Raised in New Haven, Connecticut, Kerr was introduced to bluegrass at a young age when he and a friend went to upstate New York for a bluegrass festival. Although Kerr’s family of actors wasn’t particularly interested in the genre, his friend’s mother was quite active in the local folk music scene and would host picking parties: bluegrass social gatherings in which a group of musicians get together and “pick” at the strings of their various instruments, producing music and socializing in the process.

Seeing this fun, social aspect of bluegrass music at a young age certainly stuck with Kerr, even as he was getting involved in the New York City bluegrass scene—which he labeled “surprisingly… quite good.”

When asked of his hopes for the future of the Columbia Bluegrass Ensemble, Kerr did not hesitate in his response.

“I would like the word to be spread around Columbia that we exist a little bit more. A lot of people are surprised, like when we play out at the Low Plaza, or sometimes when we play at Riverside Park, people say, ‘Oh, I had no idea there was a bluegrass ensemble here! I love bluegrass, how can I get involved?’” Kerr said.

Staff writer Bella Bromberg can be contacted at bella.bromberg@columbiaspectator.com.Follow Spectator on twitter @ColumbiaSpec.