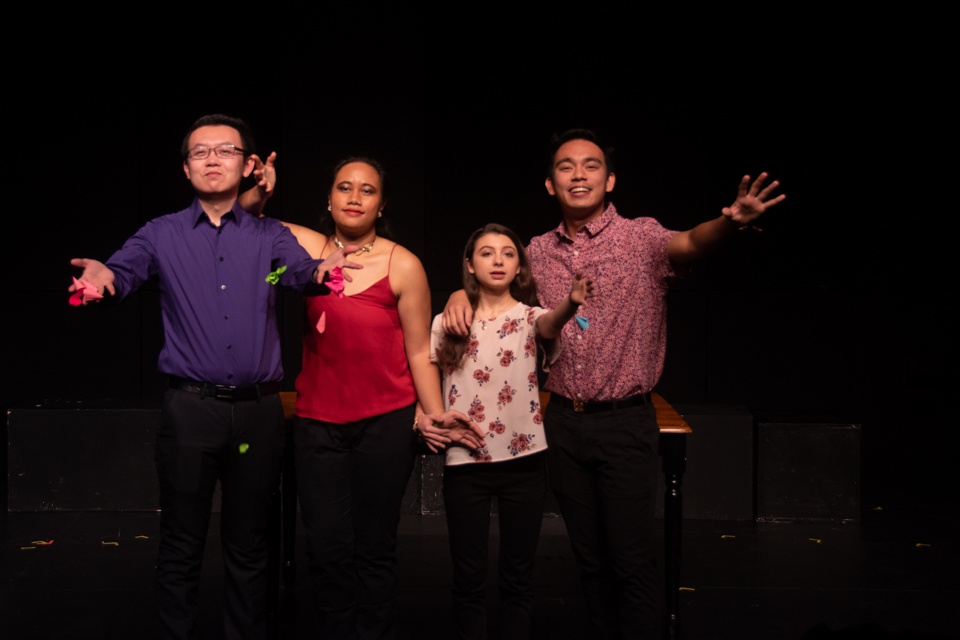 On Friday night’s performance of Columbia’s New Opera Workshop fall repertory scenes at the Glicker-Milstein Theatre, the drama commenced even before the orchestra struck its first chord. A handful of audience members were forced to leave the theater due to overflow in order to comply with fire code.

There was not an empty seat in the house, and some audience members had overflowed into the wings of the theater, hoping to spend the duration of the show sitting on the stairs. This is a testament to the popularity of the show, which portrays opera in a manner that is intimate, comedic, and uniquely accessible and enjoyable to audience members with all ranges of opera-watching experience.

In its program, NOW called this semester’s series of the repertory scenes “the most diverse we have ever created.” The statement certainly rang true over the course of the performance; this year’s selection crossed over centuries and many geographic boundaries. Actors performed scenes from nine distinct operas and composers and sang in four different languages. (English subtitles were conveniently played on a projected wall for all those that did not identify as quadrilingual).

In the first scene, Bach’s “Coffee Cantata,” Mr. Schledrian, portrayed by Mike He, Public Health ’20, flawlessly executed his role as a stern father begging his daughter to give up her propensity to drink coffee at all times of the day. He rolled his eyes at her frequently throughout the scene, twisting his face up into a permanently furrowed brow to convey his frustration. His daughter, Liesgen, played by Gwyneth Mackenzie, CC ’20, balanced out the stiff energy of her father with her carefree attitude.

At one point in the scene, Mackenzie used her hands to waft the coffee’s aroma into her face, an expression of fiendish euphoria in her eyes. Her angelic voice sang of coffee with a certain sensuality that was simultaneously entrancing and hilarious. In a closing moment that was both sweet and jarring, Liesgen lovingly blew a kiss to her coffee mug as Schledrian dragged her body offstage.

In the second scene, “Patria Oppressa” from Verdi’s “Macbeth,” actors trudged onto the stage, heads down, wearing shawls on their backs and frowns on their faces. Their physical pain, conveyed by visible shivering, was palpable. Together, in a gorgeous, full harmony, a powerful swell of voices echoed out the words: “Our oppressed homeland,” as the orchestra exquisitely accompanied them.

In the reimagining of Mozart’s “Cosí fan tutte”— a scene that received perhaps the most laughter from the audience—three girls discussed dating strategies with a modern twist, mentioning phenomena such as ghosting boys when bored or simultaneously texting dozens of suitors.

The authoritative friend, Despina, played by Madeleine Collier, SoA ’20, instructed the two other girls, portrayed by Cleome Barber, BC ’20, and Cassandra Bartels, BC ’23, on the art of flirting. Collier, clad in patterned pajamas, wielding a curling iron as her weapon of choice, truly dazzled in this scene. She mastered the sassy energy of her character and moved with an unmatched fluidity, at one point even knighting her two friends with her curling iron. The comedic thread present throughout this entire production certainly came to a head in this scene.

In the final number, “Make Our Garden Grow” by Leonard Bernstein, all of the singers filed out in an organized manner, and the two protagonists, a couple, shared a gentle and intimate gesture of holding each others’ hands as they sang together. The ensemble smiled, becoming onlookers to the sweet romantic moment. The song reached an exquisite moment right at the end with a suspenseful pause in the music, leaving the audience holding its breath. Then, the singers repeated the final tagline, “and make our garden grow,” in a majestic final musical moment.

The passionate and jubilant attitudes of the performers were apparent throughout the production. At the end of each scene, the actors would briefly come out of character to bow for the audience. Without fail, each actor was beaming from ear to ear. There was this kind of exuberant, post performance glow on their faces—they seemed very proud of the work that they had done, and rightfully so!