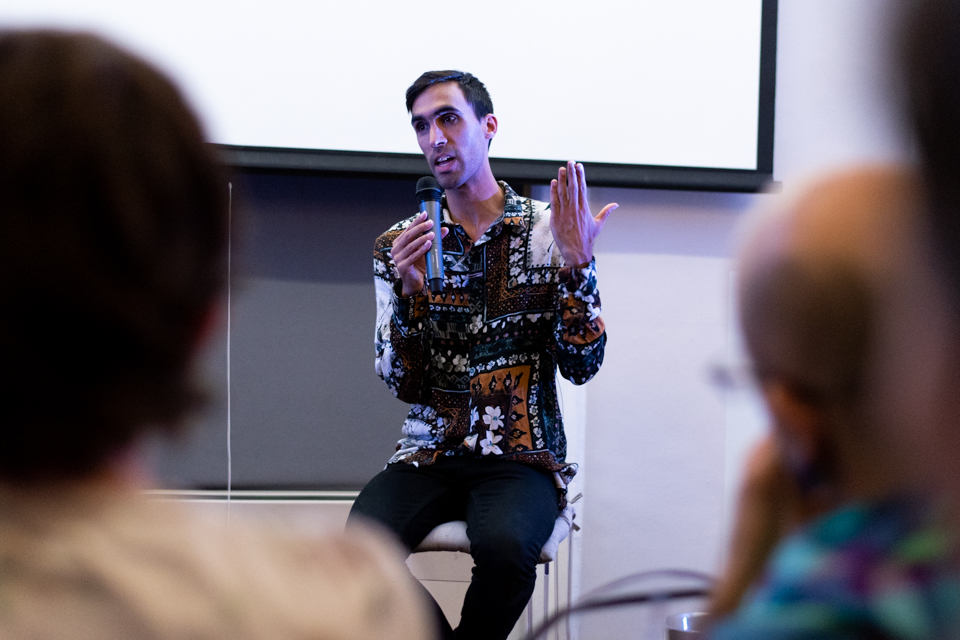 Gabriel Dharmoo's work utilizes the power and strangeness of the human voice to tackle hard-hitting themes.

Of the many words that can be used to describe Gabriel Dharmoo—and there are many, including vocalist, researcher, composer, and improviser—innovator is the one that best encapsulates his work, which utilizes the power and strangeness of the human voice to tackle hard-hitting themes such as postcolonialism, globalization, and cultural appropriation.

This past Thursday, Dharmoo brought his show “Imaginary Anthropologies,” which has won awards at the 2015 Amsterdam Fringe Festival and the 2016 SummerWorks Performance Festival in Canada, to the Columbia Maison Française. The 40-minute performance was followed by a Q&A session with audience members moderated by Columbia assistant professor of music Zosha Di Castri, who organized the event.

Before Dharmoo came onstage, Di Castri, not wanting to give away too much about the performance, simply stated that “Imaginary Anthropologies” was “a piece about otherness and power.”

Dharmoo, clad in a simple black T-shirt and jeans, walked on stage, an emotional and almost pained look on his face. A slide projected behind Dharmoo read: “The human voice: carrier of culture and identity,” and he began to vocalize, mixing melodic singing with rhythmic clicking noises from his lips and teeth.

Throughout the piece, Dharmoo showcased the musical customs of various invented cultures while a panel of fake experts commented on the absurdity and uselessness of the different customs presented.

During an explanation of “Dance Music,” an imaginary culture’s musical tradition, Dharmoo pounded his chest furiously and transformed into a choir leader who convinced the audience to follow his direction, singing melodies and making noises that he demonstrated.

He also performed a self-exorcism in which his body shook uncontrollably and he whipped himself with a towel amid cries of agony. Later, Dharmoo explained that the scene was meant to evoke the process of expelling shame from sexual intercourse.

As the performance progressed, the opinions of the "experts” grew more and more satirical. At first, they simply commented on the “primitive” and “savage” nature of certain musical traditions. The experts cited the barbaric nature of many of the portrayed populations’ musical expression as the rationale for why they went extinct.

However, this gradually changed. The experts began to wear shadows of smiles as they discussed certain traditions. At one point, the experts discussed the made-up Éléle people, a population which they claimed had participated in a “perfect cultural exchange” with the Western world. Dharmoo took on the role of the Éléle people, belting out a tune that resembled a typical country ballad.

The experts, stifling laughter, commented that the Éléle people survived due to their ability to “adapt” to contemporary music and culture. One expert even commented on the sophisticated nature of the Éléle people, and imitated several vocal practices that are clearly prominent in Western musical culture, such as a vocal growl, a Mariah-Carey-esque “Oooh!” and a soulful “Mmm!”

Dharmoo’s rendition of this country-esque song incited roars of laughter from the audience, who presumably realized that the scene was a satirical commentary on the supremacist attitude that consumers of Western music might possess.

If an audience member were unfamiliar with Dharmoo’s work, and the cultures were indeed real, then Dharmoo’s imitation of them, and the subsequent roaring laughter of the audience, might be highly offensive. For this reason, “Imaginary Anthropologies” challenges audience members to think not only about portrayals of various musical practices that they are witnessing in real time, but also how they interact with the material as a viewer.

As Dharmoo later explained, the audience’s laughter is essential to the work that the piece accomplishes, as it guides the audience to the realization that the cultures being portrayed are imagined, a fact essential to correctly interpreting Dharmoo’s artistic vision.

“Laughter is a very weird thing about this piece, because I don't think it works without laughter. If nobody laughed, I'd be like, ‘Oh, something didn't work,’” Dharmoo said.

In addition to laughter, another vital ingredient in Dharmoo’s performance is his racial ambiguity.

“I’m kind of taking advantage of my own ethnic ambiguity as a mixed, bicultural person, to kind of play with ambiguity and to frame things around things that are undefined [that] are hard to essentialize,” Dharmoo said.

As Dharmoo plays with the fluidity of culture, the audience is left to make its own assumptions about where these cultures are actually from—an internal dialogue that might spur an audience member to examine their biases when they are presented with so-called primitive cultures.

When asked from where the idea for the mockumentary-style performance originated, Dharmoo was ready with his response.

“By choosing to set [the show] in that kind of parallel world, I don’t have to tie myself to existing situations. And these existing situations can be triggering, ongoing, or, you know, there’s lots of danger there,” Dharmoo said. “You can point to things, you can critique things, without getting things completely wrong.”

At the end of the piece, short biographies of the “experts” who had been commenting on the music throughout the performance appeared on the screen.

One expert’s biography comically cited a two-week humanitarian trip that he participated in during his teens as one of his most treasured life accomplishments. The trip deeply influenced him and spurred him to dedicate his life to sharing his opinions about culture and art. It seemed that the audience picked up on this satire when they laughed, this time at the expense of individuals like the self-righteous “expert.”

Another biography introduced an expert as the “Minister of Assimilation.” As these slides played, the audience exploded in laughter, emphasizing the satirical nature of the piece.

In the final moments of the performance, Dharmoo assumed a rigid posture, an awkward smile plastered on his face. As the lights dimmed, he stared out blankly into the audience. The ambiguity of the ending left viewers to ponder the implications of the piece as the room faded to black.