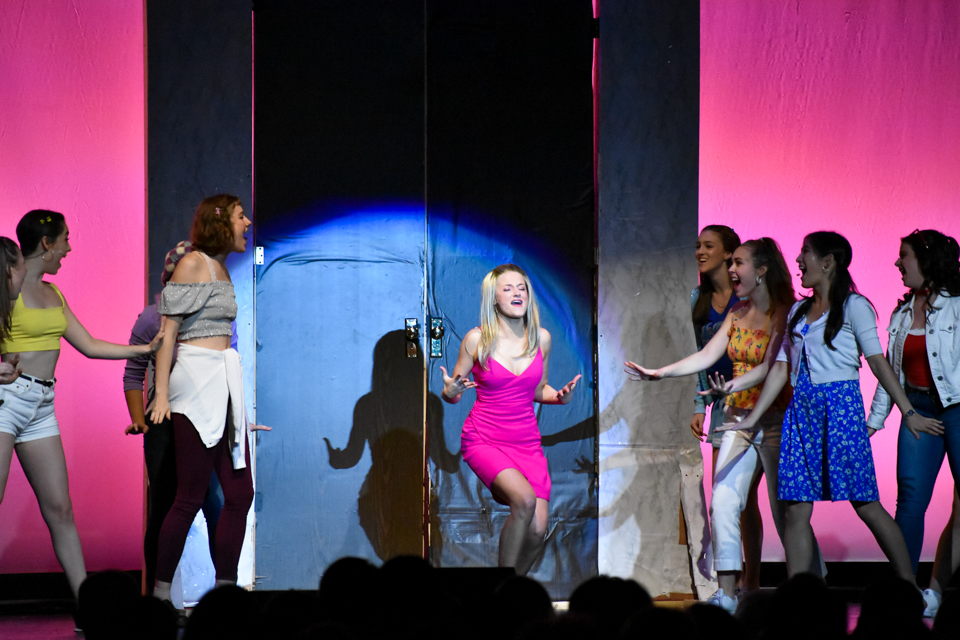 Genevieve Joers, pictured center, got the chance to be blond, taking on the role of Elle Woods.

On Friday and Saturday, CMTS presented “Legally Blonde” in Roone Arledge Auditorium. Directed by Ilana Woldenberg, BC ’20, the nationally-acclaimed musical guided the audience through the journey of Elle Woods, a spoiled rich blonde from California who gets into Harvard Law School, struggling to fit into campus life while on her mission for love.

Genevieve Joers, CC ’20, got the chance to be blonde, taking on the role of Elle Woods. Joers wore a wig, but it could have been her natural hair with a nice blow-dry. Not only was her Valley girl voice on point, but the actor’s Cali sorority-girl attitude dominated the stage. Channeling her inner Reese Witherspoon, Joers’ performance brought audiences back to the early 2000s, emphasizing the fashion of this era: tracksuits, sparkly tank tops, denim everything, and pink—lots of pink.

The production kept a very simplistic set, designed by Eliza Cohen, BC ’20—sometimes using just one door or table. Certain sets were more detailed, like Elle’s room and the Harvard classroom, using pinboards and desks littered with hair products and makeup to emphasize the change in location. However, other sets, such as those that recreated the courtroom or hair salon, could have benefitted from more props to transform the scene into something more realistic. Nevertheless, the inclusion of two live dogs in the performance—a poodle and dachshund—more than made up for the lack of other props.

Polychromatic lighting, designed by Jessica Miner, BC ’23, set the mood for each scene, changing colors according to a scene’s tone, and periodically returning to the musical’s vital pink theme.

Alongside the lighting, music directed by Megan Trach, BC ’20 and Seth Schultheis, a student at the Manhattan School of Music, and performed by an accompanying orchestra helped create an especially goofy vibe at moments during the musical.

Legally Blonde uses musical numbers as the main form of story-telling, with actors spending the majority of their time on stage singing rather than talking. Joers’ voice shone throughout the entire musical, captivating the audience with her killer high notes and satisfying range, highlighted in her soulful performances of “Legally Blonde” and “Find My Way.”

The production placed a strong focus on choreography, by Andrea Patella, BC ’21. Actors displayed their skills in rigorous, technical dances, including an intense jump rope scene in the opening of the second act.

By far the most impressive dance number was the iconic “Bend and Snap,” with some of the actors performing high straddles, pikes, and front-flips. While the dances were intense, the tone of the number remained light-hearted and silly, getting frequent laughs from the audience.

However, some characters and scenes received more hoots and hollers from the crowd than others.

In particular, Hope Johnson, BC ’21, who played Elle’s hairdresser and friend, Paulette Bonafante, provided extra comedic relief in an already farcical musical. She vigorously performed the musical number “Ireland,” her melodramatic singing and step-dancing hyping up the crowd. During Paulette’s scenes, the orange, green, and white colors of the Irish flag lit up the backstage walls.

Another crowd favorite was the musical number “There! Right There!” in which characters tried to decipher whether the witness on the stand was gay or European. Jumping around the court, on-and-off of wooden chairs, the cast did well to create a playful and chaotic feel for the scene, inviting the crowd to go along with them.

CMTS’ lively performance mirrored the play’s theme of bringing spirit and fun to a serious and dull Ivy League institution—something the audience members could perhaps relate to.

“As we searched for an answer to the stresses of ‘life’ at Columbia, we found it in a badass sorority chick with Blonde hair, an affinity for pink, and a penchant for defying expectations,” Woldenberg wrote in her director’s note.