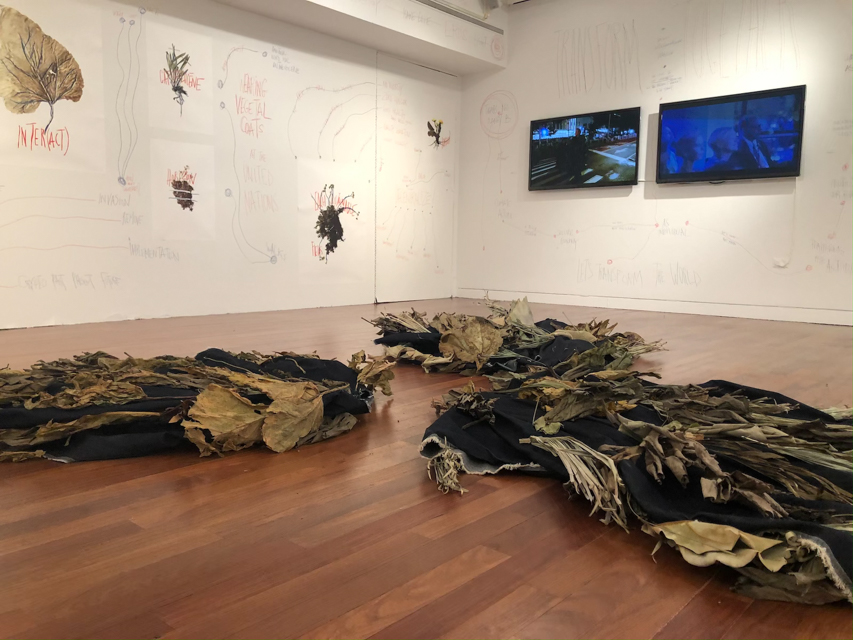 Artist Yann Toma knows that tackling climate change can feel overwhelming in the face of the global scale of the crisis. He insists, however, that this perception is “only an image,” one which he brought to life in his new exhibit “Capitalocene.”

Capitalocene opened on Nov. 14 at Columbia’s LeRoy Neiman Gallery. It features three suits covered with large leaves, which Toma calls vegetal coats, placed on the gallery’s floor; colorful writing on the walls; and two videos: one documenting Toma’s procession to the United Nations Climate Action Summit in September and the other displaying climate activist Greta Thunberg’s speech at the Summit.

Toma is a French conceptual artist who has served as an artist-observer in residence at the United Nations since 2007. His previous work addressed the climate crisis in a similarly disruptive manner; his 2015 piece, “Human Energy,” projected the words “1.5 DEGREES” onto the Eiffel Tower to bring attention to the anticipated rise in global temperature.

Toma arrived at the Climate Action Summit wearing one of these vegetal coats. With two others wearing the same botanical clothing, he walked across New York and into the summit, where Thunberg gave her speech on the same day.

“When you are wearing the nature and you are feeling the nature very closely, it gives you energy to transmit elements, it gives a new relation of people,” Toma said of the intention behind his choice of clothing.

The three coats now lay on the gallery floor, providing a tangible reminder of Toma’s procession. The short video documenting the journey he took in them highlights how his performance served as a disruption to the Summit’s orderly tone, which he related to Thunberg’s speech.

“It was really interesting to come inside at the moment when Greta Thunberg did her declaration, you know, ‘How dare you?’” he said.

Toma acknowledged that not all of his peers hold the same positive view of Thunberg, noting that some would describe her as “too deceptive.” This awareness of generational divides over climate change was a driving factor in bringing the exhibition to Columbia.

For Toma, it was important to “talk about [the procession] outside [of the] U.N., in the place of knowledge. I think it's very important that I do that in Columbia University.”

His vision of how his exhibition would fit into Columbia was clear: “My pleasure and my honor would be that this place could be the place for all the young people of Columbia who are activists invested in that way just to come to talk here, and record, and add elements of reflection to impact concretely some new actions.”

In articulating his hopes for how student activists would use the space, Toma stressed that the exhibition was not made to simply commemorate his procession at the United Nations but to spark new action.

“I think [the exhibition] could be an occasion for [students] to come and exchange together, maybe to have sessions inside it. I would like to create the occasion of that … using the words I offered,” Toma said.

Beyond the exhibit’s floor displays, the white gallery walls were covered in handwritten words related to climate change, scribbled in red with lines and circles connecting them in a seemingly frantic manner. The intention behind the terms, though, is a critical one for the artist.

“I put words which are supposed to create a positive impact in the sustainable development and that companies use to say, ‘Hey we are really invested in that, come and do business with us, we are good companies because we use these words,’” Toma said.

“I wanted to say that there are several levels of understanding … that this is a message that seems very positive—it could be positive if the companies really act in the sense of changing climate change,” he added.

This focus on the hypocrisy of companies that influence the environment is what inspired the exhibition’s title. The term “capitalocene” means “the idea that the global crises of our time are rooted in the Age of Capital,” the Neiman Center explained.

Though critical of this Age of Capital, Toma does not see the environmental damage of corporations as insurmountable.

“Now the world is ready to have good change and significant change with new energies. With new economies, it’s only a question of time,” he said.

Toma looks upon the younger generations as the source of this change, saying, “[Young people] must—have to be—invested as responsible inside the organization, inside the companies, inside the business, to change all of that. … They have to keep their ideals and their beliefs because if they give up, the world is falling because of that, not because of the industries.”