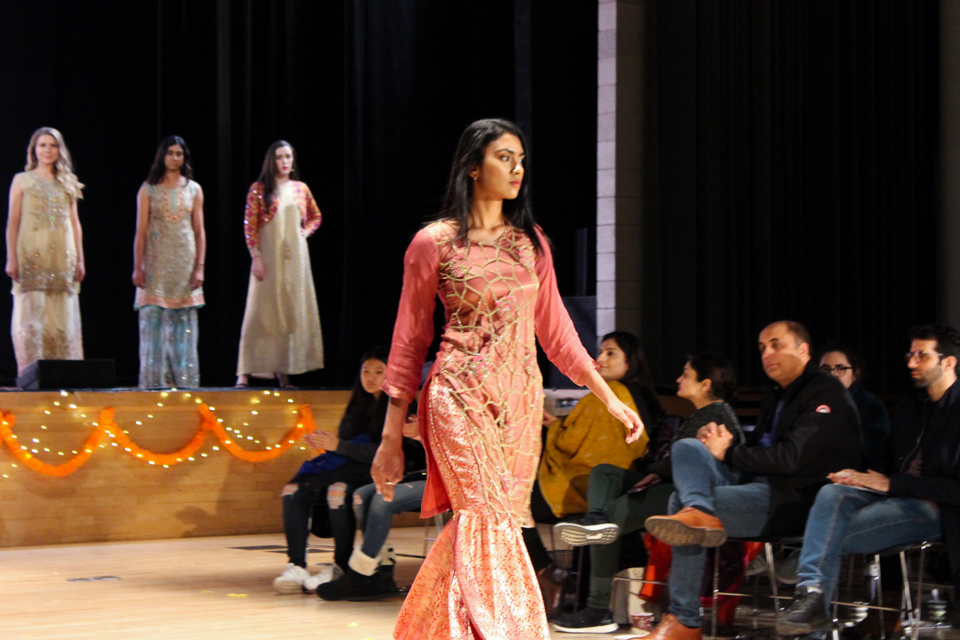 This year’s event theme, Marigolds in Peshawar, invited audience members to indulge in spring while enjoying a fashion show.

Pastel tulle and strings of marigolds lined the walls of Roone Arledge Auditorium as fairy lights lit up the stage and yellow flower petals laid scattered around the venue’s floor. The smell of samosas wafted through the room as students and visitors mingled over chai, slowly taking their seats, eager for the night ahead.

Through this event, OPS worked to celebrate South Asian culture and style by showcasing a range of traditional clothing styles. Event chair Samar Iqbal, BC ’23, aimed to create a platform for OPS to demonstrate that South Asian clothing is not limited to a single group of people.

“Growing up, you never saw such huge representation in South Asian culture, especially in fashion,” Iqbal said in an interview with Spectator. “I love how Chamak shows the broader Columbia community that South Asian fashion doesn’t necessarily have to be specifically for one certain group because our models this year are really diverse. You know, this is just everyday wear.”

This year’s theme was inspired by Iqbal’s admiration for floral designs and the spring wedding season, specifically the marigolds that bloom every year in Peshawar, Pakistan.

The fashion show was composed of four scenes: casuals, Kashmiri attire, men’s, and designer. Undergraduate students modeled all of the featured looks. The casual and men’s scene included clothing from Iqbal and her brother’s wardrobe, while the Kashmiri and designer scenes highlighted outfits donated from outsourced designers.

“It’s basically everything that you wanted to experience in a Desi wedding except without the constant terror that you forgot to say hi to an auntie or uncle,” Nandini Talwar, BC ’22 and the Chamak master of ceremonies, said.

Upbeat Bollywood music played in the background as models began to strut down the aisles in casual clothing, posing at different points as if it were a real runway show.

For the second scene, the Kashmir line was composed of nine looks curated by Nousheen Afzal, owner of Hamzaara Kashmiri Handicrafts NewYork.

“The reason why we’re having a Kashmir scene is because of the crisis that is occurring right now,” Iqbal said. “I think it’s really important to have that scene because obviously, the clothes are beautiful, but also, it provides awareness that Kashmir is its own autonomous state and OPS supports Kashmir and all its decisions.”

Prior to the Kashmir scene, Asma Muzaffar, a representative from Stand with Kashmir—an independent advocacy group dedicated to ending the military occupation in Kashmir—delivered a brief speech about the current human rights issues ongoing in the region. Beginning with a poem in Kashmiri, Muzaffar described Kashmir’s current state, encouraging audience members to get involved in order “to prevent history from repeating itself.”

In the final two scenes, students modeled men’s apparel and designer pieces donated by Maheen Ali, the Long Island-based custom designer of Mahee Studio. Each piece is carefully handcrafted using a range of textiles and precise beading techniques. Models walked down the runway showcasing Ali’s vibrant pieces, with light reflecting off the beads to create an eye-catching effect.

OPS prides itself in creating a welcoming and supportive environment for students of all backgrounds, and Chamak serves as a rewarding experience to the group’s members as they aim to diversify both their membership and events each year.

“It’s all about connecting back to your roots, something that we lost in our childhood, and so college is a great way to enhance that and show it off to people,” Iqbal said.