“1919: Black Water” exhibition reflects on anti-black attacks of the Red Summer of 1919 through art

“1919: Black Water” exhibition reflects on anti-black attacks of the Red Summer of 1919 through art 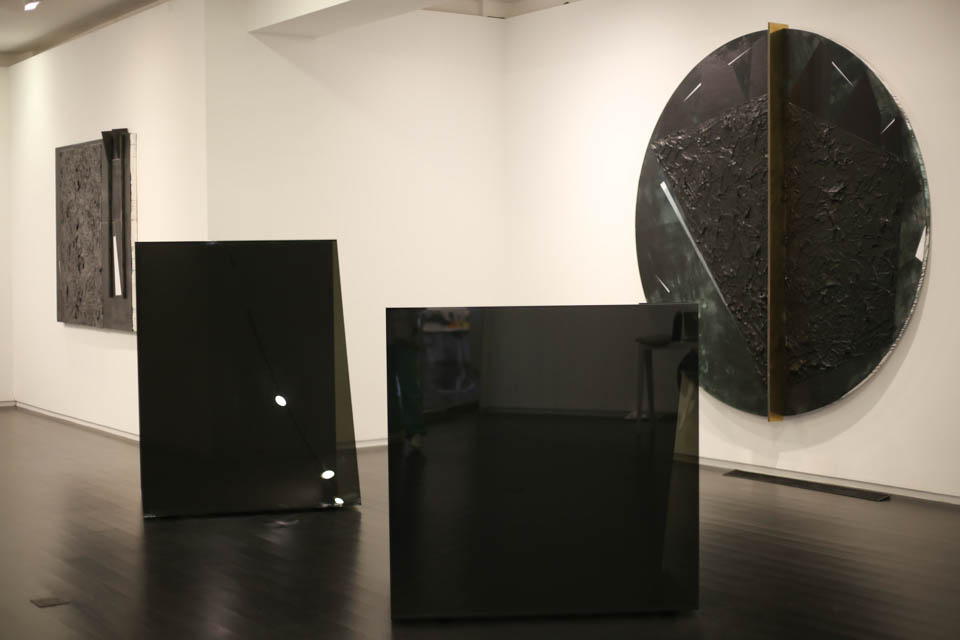 Artist Torkwase Dyson brings complex ideas to life through a number of mediums.

The “Red Summer” of 1919 was marked by extreme racial violence, where white supremacists murdered and terrorized hundreds of black individuals across the United States. The Arthur Ross Architecture Gallery’s current exhibition, “1919: Black Water,” homes in on one of these homicides with paintings and sculptures by artist Torkwase Dyson.

Though the Red Summer was marked by hundreds of deaths, Dyson’s work focuses on one incident on a Chicago beach involving the death of a young African-American boy named Eugene Williams.

“It’s a time in Chicago where they have a very strict separation between the white and the black beaches, and they are all swimming in this interstitial space in the middle of the separation, and [Williams] got hit by a rock from someone from the white side of the beach, and he died,” Carlovich said of the incident, which is described in detail on wall text in the gallery.

To portray the murder through art, Dyson experimented with ideas of water, horizon, and reflection.

Dyson brings these complex ideas to life through a number of mediums. The exhibition’s paintings, though abstract, clearly depict the concept of black water with textured black paint that replicates the movement of water. Many of the paintings have intricate wood pieces fastened onto them and bright blue spots that interrupt the otherwise all-black paintings. The meaning of these paintings is heightened by several acrylic sculptures that sit on the gallery floor.

“For the sculptures, she was interested in creating these mirrored surfaces with angles so that you have reflections but they are not perfect, and they interact with each other, which is something that has a dialogue with water also,” Carlovich said.

While helping Dyson with the construction of these paintings and sculptures, Carlovich noted a departure from what she typically uses in the classroom citing mixing paints, creating wood pieces, and painting as some of these new methods.

“It took me away from theory a little bit to understand more practical and everyday questions of the artistic practice,” she added.

Sunwoo, the curator of the exhibition, seemed to have this in mind when she sought out Dyson to bring her art to Columbia, according to Carlovich. Originally, the plan was to have Dyson conduct a performance at the University, but that plan changed to her creating an exhibition.

Outside artists like Dyson who come to Columbia can contribute to the efforts of Carlovich and other GSAPP students to translate academic theory into tangible artistic skill. It was during Dyson’s summer residence that Carlovich worked closely with her on the exhibition. Sunwoo’s efforts to have the entire creative process unfold on location at Columbia were essential to making the exhibition a learning experience for the graduate students involved.

Beyond elevating the technical skill of students who tend to focus on theory, Dyson’s work bolstered their theory itself by integrating ideas of identity and shining a light on difficult histories. Dyson’s work has repeatedly discussed blackness, and by describing a previous performance Dyson did with four other black artists, Carlovich emphasized Dyson’s identity as a driving force of her work.

“I think that especially in the case of discussing blackness, just the fact that she is engaging in an artistic career and having visibility … I think this is already very symbolic,” Carlovich said.