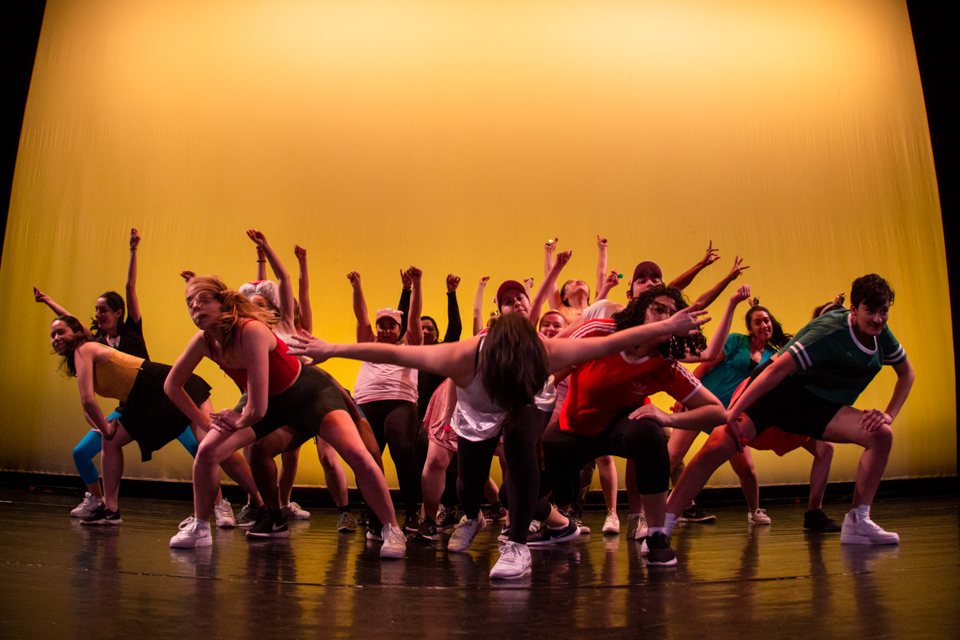 This semester's choreography echoed the emotions evoked by the colors of the rainbow.

Known for titling their performances with witty plays on their name, Orchesis is Columbia’s largest student-run dance group, accepting every dancer that auditions each semester. With over 200 performers and 15-plus choreographers, the group will present “Life in ColOrchesis: A Color Themed Dance Show” in back-to-back performances this Friday evening in the Roone Arledge Auditorium.

To choose a theme each semester, the Orchesis board relies on community suggestions. According to producer Sophie Visscher-Lubinizki, BC ’21, whoever chooses the winning theme obtains a certain degree of “bragging rights” within the group. She revealed that this semester, “Life in ColOrchesis” was proposed by choreographer Mira Tignor, BC ’20 .

“We open up a Google form to our community and people submit all their title ideas and songs that would go with the title, and then as a board, we vote on the theme that we think would best represent the community for that semester,” Visscher-Lubinizki said.

This year’s color theme allowed choreographers to experiment with costumes and lighting design, which served as a compliment, but not a crutch, to their work. It helped to establish a throughline that connected the pieces, emphasizing the truly collaborative nature of the massive undertaking that is Orchesis.

“We just thought it was a really great way to show the color that dance brings to our lives. We’re just a really fun organization, we’re like a big family, and we thought that fun colors is kind of what we needed in this dreary winter, fall semester to brighten up everybody’s lives before finals week,” Visscher-Lubinizki said.

At a dress rehearsal Wednesday night, Orchesis’ performance featured 15 works of student choreography, supplemented by four color-themed interludes of red, yellow, green, and blue. Although clearly less rehearsed than the rest of the show, these interludes cleverly incorporate color in every conceivable way. The red interlude, for example, was choreographed to Taylor Swift’s iconic song, “Red.”

The choreographers found more ways to make use of the theme by using color as a means to express emotion. The combination of movement, lighting, costuming, and music created an atmospheric experience which resulted in deep feeling corresponding to the chosen colors.

“Moonlight,” choreographed by Michaela Fleischer, BC ’22, was a prime example of this approach. Performers dressed in deep blue leotards danced in front of a blue backdrop to Beethoven’s “Piano Sonata No. 14,” eliciting an intensity and longing that permeated the space.

“Gamers, Rise UP!” choreographed by Tamryn Hodge, BC ’21, was the antithesis to “Moonlight.” To a soundtrack that includes “Mii Channel (Remix)” and “Super Smash Bros (Trap Remix),” performers danced around on a rainbow-lit stage, dressed as recognizable video game characters including Princess Peach and Toad, Mario Bros’ Mushroom.

The synthesis of works so unique yet so adherent to the chosen theme created a viewing experience that remained fresh and engaging as the show unfolded. The program also featured a range of styles from contemporary, to lyrical, to jazz, to hip hop.

Comprising one of two choreographic duos of “ColOrchesis” was Posey Cohen and Sarah Beck, both BC ’22. Together, they created “SOSEY,” an upbeat hip hop piece set to a medley of music featuring Beyoncé and The Weeknd. In the program notes, they describe their style as both “fun” and “aggressive,” which shone through clearly in the work.

Emblematic of the inclusive nature of the group, many of the pieces featured large casts of dancers. The sheer number of people involved in Orchesis requires choreographers to employ strategies to lessen the oftentimes overwhelming effect of dozens of bodies onstage at once. These strategies involve dividing the dancers into groups, and allowing for solo moments that enforce and celebrate uniqueness.

“Numbers,” choreographed by Orchesis treasurer Kat Bartley, BC ’20 , was a wonderful example of a piece that made a large cast feel intimate. Featuring 14 dancers, the choreography allowed for seamless entrances and exits, making the stage feel full while also permitting individuality to shine.

The show concluded with a grand finale performed by the entire cast set to OneRepublic’s theme-encompassing “Life in Color.” With everyone sharing the stage at once, the reality of how truly large an organization Orchesis is became clear.

Lit up in all the colors of the rainbow, dozens of dancers performing and smiling in unison reinforced the value of the shared human experience, inviting the audience to join in celebrating “Life in ColOrchesis.”