With disturbing historical context, a superb cast could not keep “Men on Boats” afloat

With disturbing historical context, a superb cast could not keep “Men on Boats” afloat 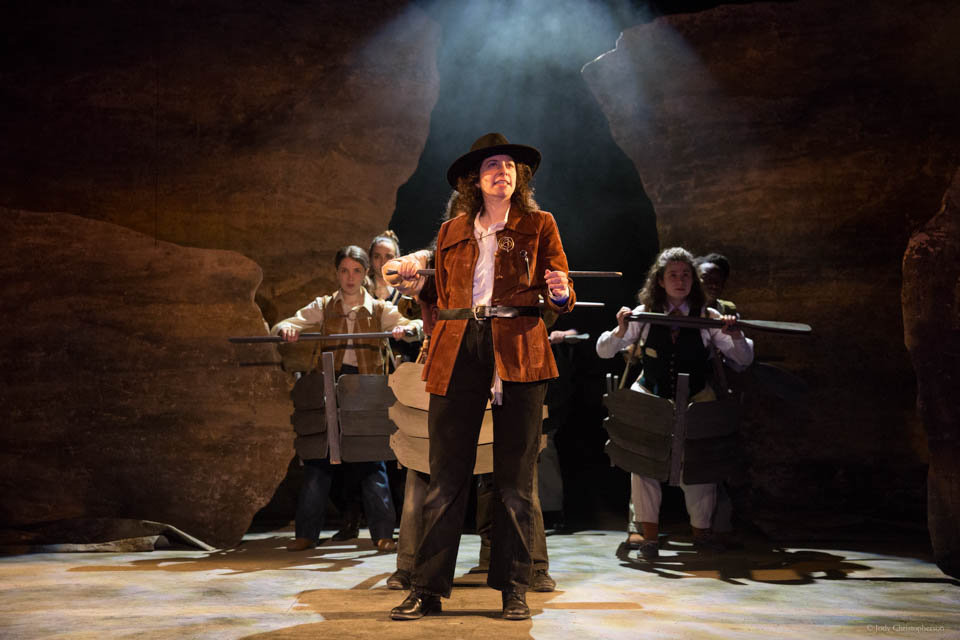 “They took our language.”

“They wanted us civilized.”

“They tried to erase us.”

These messages—painted plainly on crates presented by Native American Ute tribe members Tsauwiat, played by Rivka Keshen, BC ’22, and The Bishop, played by Angelica Dzodzomenyo, CC ’23—were given to members of the Powell Geographic Expedition of 1869 in “Men on Boats.” The “They” on these crates? Explorer John Wesley Powell and the U.S. government.

These silent messages are the strongest voice given to Native American people in this play.

The Barnard theatre department presented Jaclyn Backhaus’ “Men on Boats” from Dec. 5 to 7 in the Minor Latham Playhouse. The play was directed by Charise Greene—before her departure on maternity leave—and Cody Holliday Haefner, CC ’12. Though well-acted and a feast for the eyes, the play promotes the successes of historically troubling figures, leaving a sense of discomfort rather than comic enjoyment.

This year marks the 150th anniversary of the Powell Geographic Expedition of 1869, the first government-sanctioned exploration of the Green and Colorado Rivers through the Grand Canyon. “Men in Boats” detailed the adventures of the team led by Powell, played by Nina Lucy Locke, GS ’20, the one-armed Civil War veteran, geologist, and explorer of the American West.

The play is based on Powell’s journals of the expedition, as published in “The Exploration of the Colorado River and Its Canyons.” In the face of tumultuous rapids; near-drownings; and losses of boats, supplies, and crew members alike, the team made it successfully through the canyon, producing detailed maps and descriptions of lands previously unexplored by white men.

“Men on Boats” details this narrative almost exactly as presented in Powell’s journals, with two especially poignant changes. First, instead of utilizing period language, the play featured modern speech. Second and most compelling, instead of, in Backhaus’ words, a cast of “Hugh Jackmans,” the production was cast with diverse, non-male identifying actors, as specified in the play’s textual introduction.

Larger-than-life performances mocked chauvinism and toxic masculinity, giving audiences a chance to laugh at non-male figures presenting these attitudes. Each actor was physically expressive, and their faux-masculinity—from their movement in the titular boats (cleverly built entirely of oars) through the rapids of the river, to their individual gaits—was well-choreographed.

Each actor in Powell’s troupe was captivating and comical, amounting to an engaging ensemble of unique personas. Standouts among the wholly stellar cast included Sophie Poole, BC ’22, as the hilarious young Bradley; Eliza Ducnuigeen, BC ’21, as the measured, eloquent Englishman Goodman; Devin Hammond, BC ’20, as the stone-faced, pragmatic Old Shady; and Brianna Johnson, BC ’21, as the bright, amusing cook Hawkins.

However, the character of Powell was not presented as the domineering, forceful leader that history books make him out to be. Powell’s adversary and rival leader Dunn, played by Viviana Prado-Núñez, CC ’20, instead impressively presented this level of passion and fortitude, which overwhelmed Locke’s measured, diluted interpretation of Powell.

However, this subversive production choice becomes complicated when the playwright’s original intentions are revealed. In a post-show talk after the opening Thursday evening performance, Backhaus spoke candidly on how miscasting these cisgender, white male historical figures was not her initial intention upon writing the play, but rather a decision made during the casting process.

This decision, instead of being a pointed foundation of the text, bewilderingly becomes an afterthought.

The intention of this narrative is further called into question when one investigates the life and legacy of leading player Powell. As was brought to light in a recent Scientific American study, Powell is a disturbing historical figure. A champion of Native American eugenics, he promoted the erasure of Native American cultural identity and furthered imperialist anthropological research based on assumptions of the racial inferiority of indigenous peoples.

As is touched upon in the play, Powell later communicated to the government after his 1869 expedition that the Grand Canyon area was more uncharted than it actually was. There are multiple instances where Powell’s character bluntly renamed and claimed obviously indigenous lands.

At one point, he jokingly stated, “They probably named it already, and here we are naming it after ourselves.” These moments were presented in the play as mocking quips, downplaying their truly alarming connotations.

In an attempt to dilute its contentious subject matter, “Men on Boats” is defined as a comedy—a narrative that laughs at these historical personas alongside our leading female, transgender, or nonbinary players. However, the play itself was not consistently funny.

Modernity and melodrama often veered toward the kitschy: Air horns accompanied cheers of “party boat,” and actors overexaggerated flailing movements as characters were swept off their boats into invisible whirlpools or rapids. And at times, the story was emotional as characters repeatedly faced peril.

These inconsistencies in tone distorted the production into a drama, which prompted the audience to empathize with these historical characters. But the play’s historical core remains deeply controversial, and so the play becomes a celebration of its characters’ journey and survival, which was deeply unsettling.

Why, then, did the department choose this play?

Though undoubtedly a physically challenging and exciting directorial feat, it is unfortunate that such malevolent and racist figures were lauded for the sake of a theatrically ambitious endeavor. Putting Powell’s contentious features on display is certainly critical, but as the story leans towards the empathetic, “Men on Boats” becomes disappointing.

This perhaps stems from Backhaus’ decision to stick to Powell’s journals as a template before inserting her own necessary changes—only poking miniature critical holes in the narrative without taking a definitively challenging stance on the subject.

The department chose to widen these holes dramaturgically with the aforementioned messages on the crates—further including “they took our beliefs,” and “they took our land,” which spurred an audible response from the audience—but this moment was limited to a single scene, thus seeming peripheral, and like Backhaus’ casting decisions, an afterthought.

As is expected of departmental productions, design elements of “Men on Boats” were superlative and somewhat redeeming. Of particular note is Ilana Lupkin, BC ’20, who completed her thesis in costume design with her work on this production as lead costume designer, and held her own among professional production team members.

The cast was decked in period dress of androgynous earth tones that complemented each other superbly, from its explorer gear, like Powell’s Indiana Jones-esque hat, to props aplenty, including journals, tassels, and stainless steel mugs dangling from belt loops.

Alongside set designer Audrey Vuong’s crimson and sandstone-toned canyon faces, which floated up and down as the explorers paddled through the changing landscape, lighting designer Adam Honoré’s projections of dappled blues transformed the floor into a river. All visual elements harmonized to compose a warm, arid tableau.

Despite a well-crafted performance, the narrative of “Men on Boats” does not stay afloat. Perhaps most disappointing is the fact that this is Barnard’s first entirely non-male department show cast in a number of seasons, as stated by a cast member in the talk-back.

Hopefully this trend, for a women’s college theater department, can continue periodically, albeit with productions that carry less-controversial connotations. “Men on Boats” lands less like a “Hamilton,” but rather a “Chronicles of Christina Columbus.”