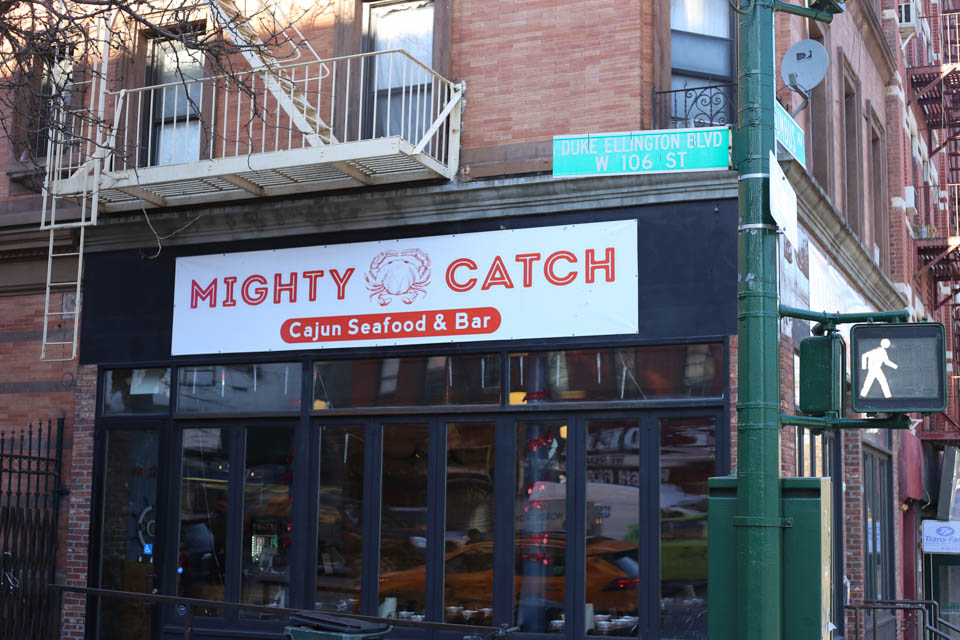 Owner Tom Lau, who owns many franchise locations, including Halal Guys, Blaze Pizza, and Butcher’s Smokehouse in New York and Philadelphia, said that Mighty Catch developed from his love of Cajun seasoning and seafood.

“I went to New Orleans and [tried] boiled Cajun seafood, and I fell in love with it,” Lau said. “I told myself when I got to New York I wanted to open something similar, maybe add a twist to it.”

Mighty Catch began as a collaboration between Lau and partner Wen Chen, who met two decades ago while working at Manhattan brasserie Balthazar. The two opened the first Mighty Catch location on Long Island in August, which closed after just two months following the departure of a head chef. Lau noted that a location in Philadelphia is also under construction.

Mighty Catch manager Amy Chen, a Louisiana native, said that Mighty Catch uses recipes developed by her brother Leo, including a homemade seafood sauce that they boil for seven hours. She noted that “there’s no such kind of restaurant in the area.”

Mighty Catch boasts of unique recipes, but it joins an already-thriving Cajun restaurant scene in Morningside Heights. Other restaurants that serve Cajun-inspired food include Cap’t Loui, a chain known for serving Asian-Cajun fusion seafood in a plastic bag; and Shaking Crab, a Shanghai-Cajun eatery with locations in the United States and China that serves spicy and garlicky seafood as well as po’ boys and Asian-inspired options.

Lau noted that other Asian-American restaurateurs have recently opened Cajun spots in New York, including The Boil near New York University and a few restaurants in the East Village.

Modern-day Cajun cuisine dates back to the early 1600s, when the Acadians immigrated to Canada and fused French countryside recipes with Canadian Maritime cooking. After settling in Louisiana, these French-Canadian settlers significantly shifted their cuisine from stews and seafood to Southern dishes featuring new ingredients like crab, catfish, and alligator. The Cajuns were inspired by the agriculture of Louisiana to create highly-seasoned dishes featuring cayenne pepper and the “Holy Trinity” of Cajun cuisine: onion, celery, and bell pepper.

Creole food differs from Cajun food in that it blends Italian, German, African, and even Asian cuisines. Centered in New Orleans, Creole food has been considered more aristocratic than Cajun food due to European influence.

Harlem houses a small population of native Louisianans who moved during the Great Migration and fled in the aftermath of Hurricane Katrina. In the first half of the 20th century, the rise of jazz culture carried with it the rise of Cajun staples like jambalaya and catfish, but Cajun cuisine faded away in Manhattan until the opening of esteemed chef Paul Prudhomme’s K-Paul’s Louisiana Kitchen in the 1990s.

In Louisiana, seafood boils, a Cajun tradition and social event in which people come together and eat boiled crawfish, shrimp, and crab, are very popular and sometimes hold a fundraising or philanthropic purpose.

Similar to many Cajun restaurants in the area, Mighty Catch offers its own version of a seafood boil with a customizable dinner boil menu consisting of over 10 seafood options, including crawfish, Dungeness crab, and lobster served by the pound. The boiled seafood is prepared in the diner’s choice of a sauce and spice level—from mild to “Insane!!!” All boiled seafood is served in a plastic bag with corn and red potatoes.

While Mighty Catch lacks many Louisiana staples like jambalaya, étouffée, and chicken creole, it offers a handful of other creative appetizers like lobster macaroni and cheese, crispy calamari, and bang bang shrimp prepared with the “house” chili sauce. Mighty Catch also features classic dishes such as Creole-style gumbo prepared with a dark roux and shrimp.

Chen noted that the Louisiana Seafood Pasta, a Mighty Catch creation that I tried, is prepared in the same sauce used for the restaurant’s boiled seafood, producing a garlicky but refreshing taste. The perfectly al dente linguine—paired with fresh clams, mussels, shrimp, and a lobster sauce that has a slight spice but does not overpower—captures the essence of Cajun-Creole cooking.

“Sometimes I like to get down and get dirty with food,” Lau said. “I want to turn this into a neighborhood restaurant that everybody loves.”

Deputy editor Noah Sheidlower can be contacted at noah.sheidlower@columbiaspectator.com.