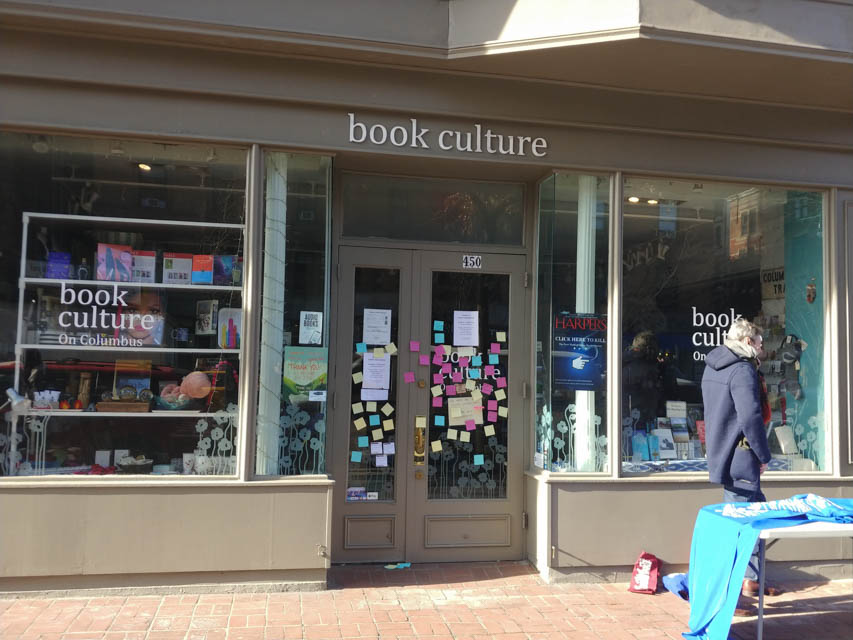 A couple of days after the eviction, community members papered the store’s windows in Post-it notes to show support for the local chain.

Book Culture’s location on Columbus Avenue will not reopen following its eviction on Jan. 7, according to a post on the bookseller’s Facebook page on Tuesday.

After Book Culture on Columbus’ landlord Walker, Malloy & Company unexpectedly locked the doors on the store, staff and loyal patrons hoped that it would reopen. Many gathered outside the building for a rally and papered the storefront windows in Post-it notes in the days after the lock-out to show their support for Book Culture and urge the landlord to give the local bookstore the chance to pay its debts.

“Though we were hoping to enter into an agreement which would allow the store to quickly reopen under new management, those negotiations have ceased and no such deal is in place,” Chris Doeblin, Book Culture’s owner and president, wrote in the Facebook post.

He went on to add that the Columbus store was a “worthwhile, viable and sustainable business” that closed due to “lack of access to investment at the right time.”

The local chain—which operates three other locations on West 112th Street, Broadway, and Jackson Avenue, all within a seven-mile radius—has faced financial struggles for years. The fight for viability intensified this summer when Doeblin announced that his stores would close unless they received $500,000 in funding, prompting an outpouring of support from the Upper West Side community. Doeblin wrote Tuesday that the Columbus store’s closure is “the saddest and most destructive outcome we had imagined.”

He wrote that 12 employees who work at the store will now be unemployed. In light of economic struggles, Doeblin has clashed with the Retail, Wholesale and Department Store Union in the past, and he was accused of denying employees holiday pay and healthcare benefits. The disputes were ultimately resolved.

Although the Columbus store will remain closed, Doeblin said that Book Culture will continue fundraising in order to open another store in the area.