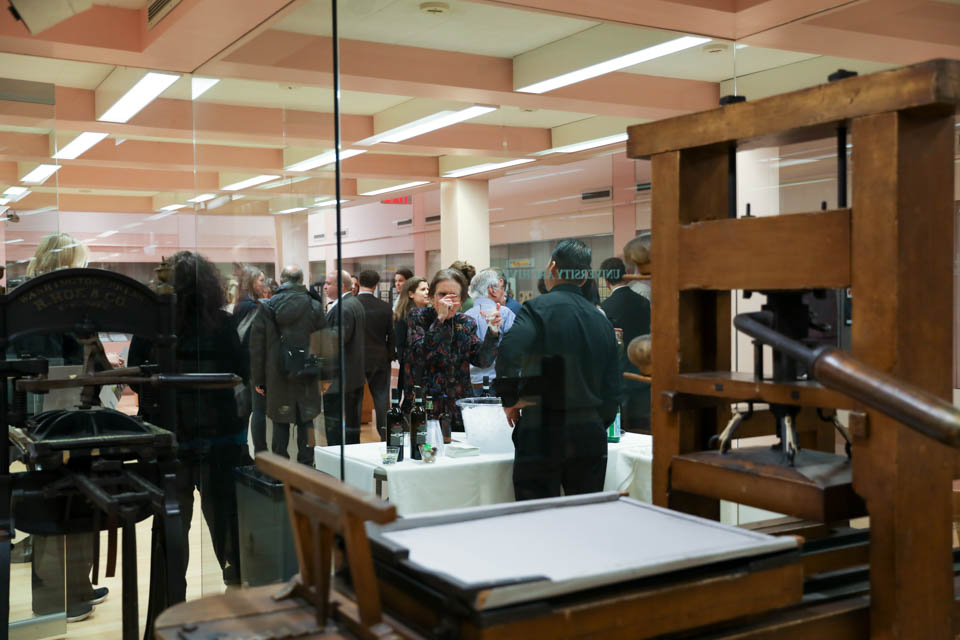 The exhibit at the Rare Book and Manuscript Library is part of the University's initiative to examine the climate crisis through an artistic lens.

Water and the treasured manuscripts archived in Butler’s Rare Book & Manuscript Library don’t usually mix, and for good reason. On Tuesday evening, however, the library combined the two in an exhibition titled “Awash in Books: Books for the Year of Water,” featuring a variety of pieces to celebrate and explore how we use Earth’s most precious resource.

According to the University’s website, the exhibit is part of Columbia’s Year of Water initiative, “an interdisciplinary investigation of water in all its social, political, cultural, economic and environmental complexities.” The project features scientific research regarding climate change and sustainability presented in artistic forms such as exhibits, symposia, and concerts. Some of the initiative’s past events included artist Daan Roosegaarde’s immersive light display “Waterlicht” and Climate Change Theatre Action’s play readings, both of which were designed to raise awareness and appreciation for natural resources.

“I have to admit I was surprised, when you start thinking about it … just how ubiquitous water is and how important it is,” he said. “It underlies our very beings and all of our cultural activity.”

“There’s a metaphorical understanding that art brings. I think art helps us take the science in and understand that it has actual meaning in our lives,” Siegel said.

While some works were directly linked to climate change, others connected to water in different ways. Through biblical connections, personal journeys, or stories of human exploitation, each work evoked a greater appreciation for this precious resource by evoking its versatility.

In her exhibited work, artist Carolee Campbell illustrates poet W.S. Merwin’s “The Real World of Manuel Cordova,” which reflects on both the physical and psychological journey of a man in the Amazon. According to the panel accompanying the work, the river depicted in the artwork serves as a metaphor “for the various kinds of journey in the poem and for the poem itself.”

According to book artist Maria Pisano, her work “Tunnel Vision,” based on a story from Pisano’s childhood, metaphorically locates the expanse of sea that separates the United States from her native country, Italy, in the Holland Tunnel. The purpose of her work, she explained, has a lot to do with its impact on the community.

“One of the things I do get back from the institutions that buy my work is how much students respond. I like the interaction that happens ... and if [my work] can begin to open a conversation on difficult subjects among students,” she said. “That’s, for me, important.”

Another work in the library’s exhibition, a piece by artist Sandy Gellis, embodies the intersection between visual art and science that the Year of Water project champions. Titled “New York City Rainfall: 1987: A portfolio of etchings,” the work is a series of tiles coated with a water-soluble substance that the artist put on her windowsill over the course of a year. The rain created various ink patterns on the tiles, uniquely and beautifully documenting the daily rainfall.

The Year of Water theme is linked to the increasing urgency of the climate change debate. Pisano, who is also a curator, is currently curating an exhibition at the Hunterdon Museum of Art in New Jersey called “Crossroads” that focuses on climate change and its ties to immigration. She reflected on artists’ contributions to activism, emphasizing their necessary role in efforts such as tackling the climate crisis.

“Climate change is displacing people; it’s changing the environment,” Pisano said. "We definitely need to be upfront and aware. And the artists that have contributed [to the exhibition] ... they are aware. And artists are important, because I think artists are at the forefront of telling important stories.”