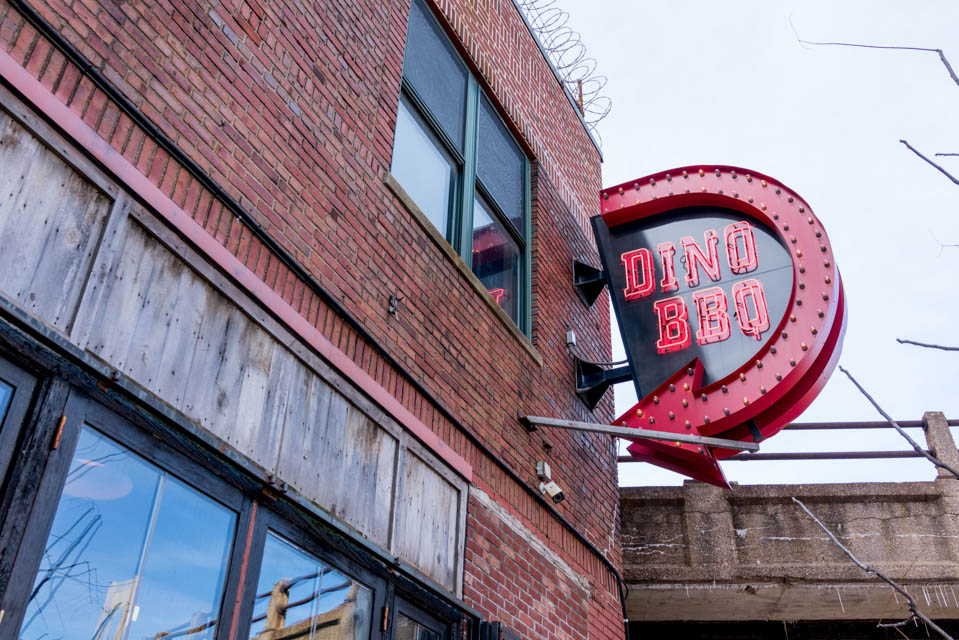 The award-winning barbecue joint is launching a new menu in February to cater to a changing clientele.

A classy yet homey set up: Dim lighting, intimate booths, live blues, and world-famous barbecue—nothing will make you feel more cozied up in the winter than dinner and a show at Harlem’s Dinosaur Bar-B-Que.

Located on 125th Street and 12th Avenue, Dinosaur Bar-B-Que attracts customers from all over the world for a taste of its unique “slow and low” barbecue cuisine. The third location of the chain, this Dinosaur Bar-B-Que opened in 2004 and was relocated to the 12th Avenue Corridor in 2007. The move came after Columbia’s 17-acre Manhattanville expansion pushed the restaurant—among other businesses— from its original Broadway spot. Due to the lack of pedestrian traffic on the corridor, restaurants in the location have adapted by becoming “destination” spots, drawing customers from different boroughs and even across state lines.

[Related: Manhattanville campus plans to make 12th Avenue pedestrian-friendly, but will businesses survive until then?]

Situated in West Harlem next to the infamous Cotton Club Nightclub, Dinosaur Bar-B-Que gives its customers more than just food: It connects them to history.

The restaurant chain started off as a concession stand founded by entrepreneur John Stage, who served food at motorcycle events as he traveled on the road. The stand eventually turned into a restaurant in 1988 in Syracuse, New York, where it attracted buzz and developed a loyal following. Since then, Stage has opened seven other locations in New York, New Jersey, and Connecticut.

Prior to the 1980s, there wasn’t much barbecue in Harlem. For much of the 20th century, the culinary focus of the area was on soul food, stemming from homemade Southern recipes by family-owned businesses in the Harlem community. In the ’80s, restaurants began to take an interest in barbecue, cooking over hardwood or charcoal for multiple hours to create a particular smokey flavor and slowly grilling the meat by applying direct dry heat. Dinosaur Bar-B-Que prides itself on its use of these Southern barbecue techniques.

The restaurant’s sauce, “Sensuous Slathering,” has won honors in publications such as Men’s Health and Eating Well magazines, as well as being named number one barbecue on Good Morning America. Its spice rub and specialty sauces are also available for sale in the United States, Europe, and Japan. Looking forward, Dinosaur Bar-B-Que is excited to be participating in Harlem Restaurant Week this coming spring.

Managing Partner Lizette Lebron told Spectator that what makes the Harlem location special is how much it truly cares about its customers.

“We put blood, sweat, and tears into our food, service, and hospitality,” Lebron said. “We work very hard because we want to turn every customer into a regular.”

Lebron added that customers love Dinosaur’s distinctive style of barbecue, but she would not reveal the restaurant’s cooking secrets to the public. Some of the restaurant’s standout plates include its prime beef brisket and chicken wings. However, in response to a change in clientele from pedestrians and workers in the area to a wider range of customers from nearby neighborhoods, the restaurant will be launching a brand new menu on Feb. 4 with additional plates, but it will still offer fan favorites.

A meal at Dinosaur Bar-B-Que, however, entails more than just eating. On Fridays and Saturdays, the restaurant welcomes customers to enjoy live music alongside their food. The restaurant tends to feature blues and swing artists for their smooth and soulful tunes. Artists who have performed at Dinosaur Bar-B-Que include Kelly Andre, Stomp Society, and Brooklyn Soul Train.

While the restaurant has a relaxed vibe, Dinosaur Bar-B-Que has been facing issues with construction in the area for the past five to six years, partially due to Columbia’s expansion. While construction was at its peak, it disturbed the Harlem area with loud noises and took up a substantial amount of space. However, the biggest impact of construction, according to Lebron, was the lack of parking space for customers.

Although Columbia’s expansion into Harlem has created tension between the University and its surrounding community, Dinosaur Bar-B-Que continues to encourage Columbia students to become immersed in Harlem’s culture by supporting local businesses—and what better way to do so than to try world-famous barbecue?

“We value our relationship to Columbia,” Lebron said. “I know we have catered for their orientation week in the past and are open to doing so again, and we encourage more students to come try our food and experience our restaurant.”