Jay-Z and Jelani Cobb speak on prison reform, NFL deals, and the hope in hip-hop at inaugural lecture

Jay-Z and Jelani Cobb speak on prison reform, NFL deals, and the hope in hip-hop at inaugural lecture 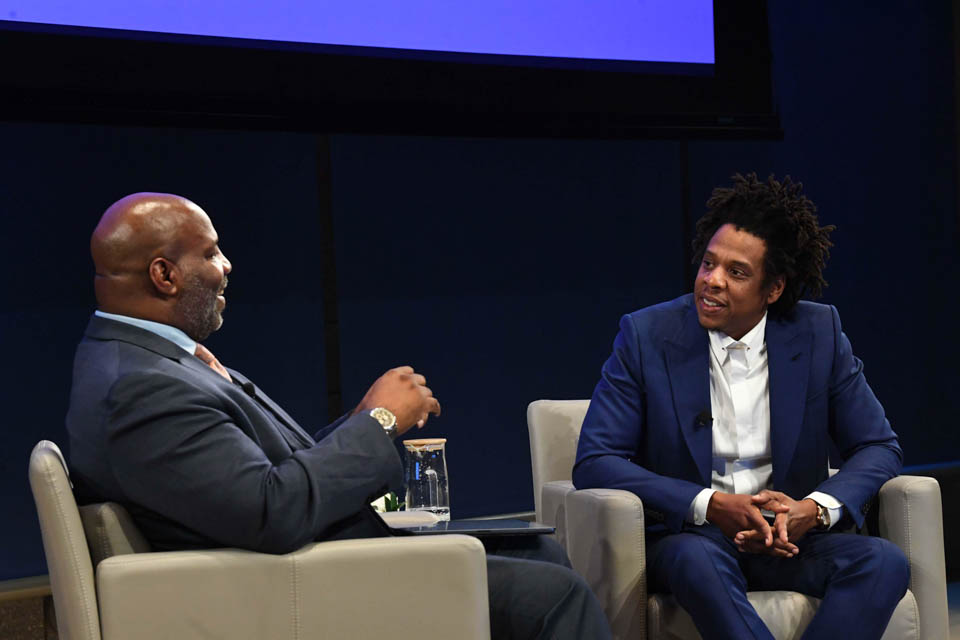 The event was hosted by the African American and African diaspora studies department to celebrate the inaugural Shawn “JAY-Z” Carter Lecture Series.

Jay-Z was met with a standing ovation upon entering The Forum on Columbia’s Manhattanville campus. While Beyoncé—yes, you read that right—slipped inconspicuously into her seat in the audience, Jay-Z sat down to speak on topics ranging from his musical influences to prison reform to his controversial partnership with the National Football League to his historic role in the landscape of hip-hop.

The event on Tuesday night was the inaugural lecture of the Shawn “JAY-Z” Carter Lecture Series, which will continue to bring prominent figures to campus through the newly-minted department of African American and African diaspora studies. In fall 2018, the University Senate unanimously voted to create the department after decades of pushing from faculty and students for an independent department dedicated to African American studies; previously, courses on the subject only existed within the department of Middle East, South Asian, and African studies and a separate institute, raising concerns around limited course offerings and struggles to maintain funding.

Department chair Farah Griffin remarked on the significance of bringing the rap phenomenon and businessman to campus to celebrate the department’s opening.

“How fitting that the first named and endowed program in our department, a department that was born here in New York City, and greatly influenced by the dynamism of Harlem’s history, be named for one of the most important and influential figures of our time, himself a native New Yorker, and in recognition of the global impact of his chosen form, hip-hop,” Griffin said.

Although the namesake kickoff event was billed as a lecture, it played out as a conversation between Jay-Z and renowned Journalism School professor Jelani Cobb, who writes about race, politics, history, and culture as an award-winning author and staff writer for the New Yorker.

As a longtime hip-hop fan, Cobb began the conversation by gathering Jay-Z’s thoughts on the predominantly black music genre’s ascent to the stratospheres of the music industry and popular culture. Hip-hop currently dominates streaming platforms, and Jay-Z attributed its rise to the stories of perseverance that it tells, both in its lyrics and through the artists behind the music.

“Hip-hop was the first time someone said, out their mouth in a global way, ‘I don’t have it today, but I’ll have it tomorrow,’” Jay-Z said. “I think that message connected everywhere, and it’s one of the most powerful messages you could connect to: hope. Hip-hop gave hope.”

Cobb hailed Jay-Z’s game-changing body of work, which not only shed light on the black male experience but also possessed a range that reflected the artist’s maturity into middle age.

Before Jay-Z, Cobb explained that hip-hop “both gave predominantly black men a forum to talk about their experiences in the world, but also made it very difficult to mature beyond a certain point in the conversation.”

“If I’m listening to Reasonable Doubt and The Black Album,” he continued, “it sounds like—not different people, but clearly one person at a different point in their life.”

Of course, Jay-Z’s career was always about more than music.

Cobb highlighted that Jay-Z’s music chronicles the war on drugs and its devastating effects on black communities, and he remarked that the law enforcement response to the crack epidemic of the ’80s and ’90s draws a stark contrast with the public health response to the current opioid crisis.

Jay-Z replied that we “can’t skirt the issue” of law enforcement unfairly targeting people of color, and he pointed to legislation as the only solution.

True to his word, Jay-Z took legal action against the Mississippi Department of Corrections last week, fighting for improved living conditions and fair legal processes for the inmates at maximum-security prison Parchman Farm.

“Now we’re finally being allowed inside to take pictures of what’s going on … and allow doctors to come and help some of these human beings inside,” Jay-Z said.

He founded the prison reform organization REFORM Alliance with rapper Meek Mill and said that the organization’s goal is to solve problems in real time, rather than waiting years to see positive outcomes. An audience member took to the microphone to say that his life was changed when he took Columbia classes during his decade in prison and asked Jay-Z for his thoughts on education in prison and reinstating Pell Grants. The rapper replied that he’d love to work with him, rousing a chorus of applause.

Jay-Z also fielded some more controversial questions from the audience. The ink is still wet on his deal with the NFL, an organization that has been embroiled in controversy ever since former San Francisco 49ers football player Colin Kaepernick kneeled during the national anthem to protest racial injustice in America. Kaepernick remains unsigned to an NFL team, and he has accused the league of colluding to keep him off the field in retribution for his protests.

Explaining his reasoning behind the partnership, Jay-Z said that he’s hoping to mobilize the NFL’s platform to spread awareness of the injustices that black people face.

“The NFL has a huge platform, and [I want to] use that platform to reach people who care and who don't necessarily know what’s going on. … That’s how we’re going to change things,” he said. “We need huge, sweeping change for us to be able to affect something.”

He acknowledged that his strategy might not work, but clarified his motivation for the deal.

“Just so you know, my intentions are in the right place. They couldn’t pay me enough. I made my own money.”

In another NFL-related controversy, Jay-Z and Beyoncé caused a stir over the weekend when they remained seated during the national anthem at the Super Bowl. Jay-Z explained that they did not intend to make a statement, saying that they were caught up in their own conversation and were enjoying Demi Lovato’s performance without realizing how they were being perceived.

Besides, he said, he was already making a statement through the halftime show and the advertisement that he helped put together.

“We had … a commercial running [on] social injustice during the Super Bowl. We were making the biggest, loudest protest of all. Given the context, I didn’t have to make a silent protest.”

Jay-Z presumably referred to an NFL-produced commercial that featured former Arizona Cardinals player Anquan Boldin. Boldin spoke about his cousin Corey Jones, who was killed by a police officer.

Some have critiqued the commercial as a performative effort by the NFL to align itself with social justice causes. NFL policy still does not allow players to kneel on the field during the national anthem.

Some fans came to The Forum seeking answers from their role model on how they could pursue the trying life of an artist. Jay-Z emphasized that the key is to have a “deep knowing” that you’re meant to be on this path and a strong conviction in the truth you have to share.

Earlier in the evening, University President Lee Bollinger spoke in a similar vein. In his remarks, he focused on the interconnectedness of the American experience.