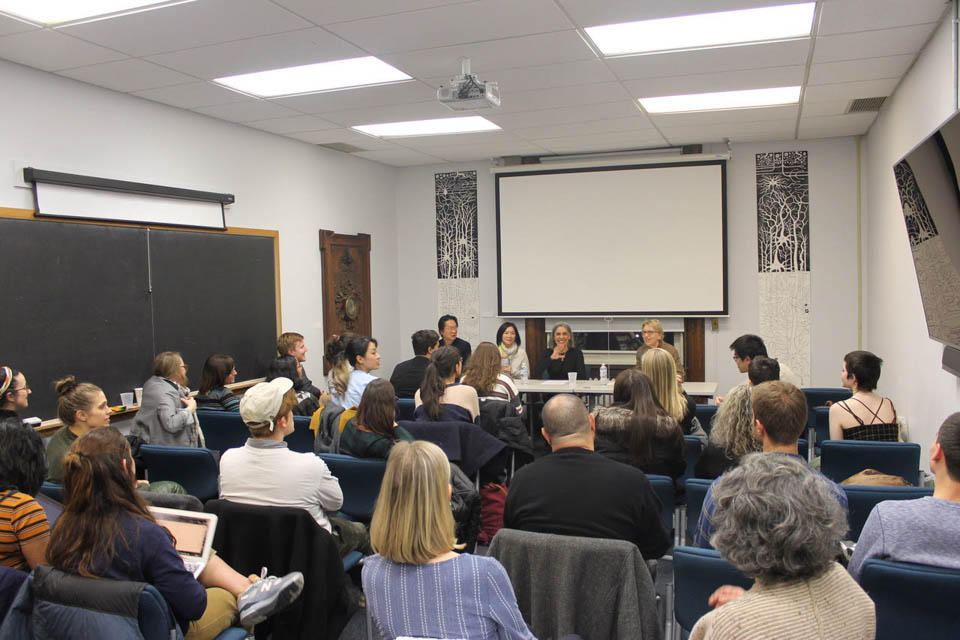 Andrew Wells / Courtesy of the Undergraduate Committee on Global Thought

The documentary follows Dr. Jess Ting, who was a general plastic surgeon before specializing in transgender medicine and surgery—a responsibility he took on at Mount Sinai Hospital that no one else would.

A doctor receives a call in his car. He picks up his phone and hears a shy, young voice inquiring about the age at which you can get gender reassignment surgery. The doctor replies that in New York City, you have to be 18 years old. The young voice belongs to a 14-year-old.

“Do you think that’s going to change anytime soon?” they asked. “I’m just very impatient.” And the screen goes black.

This Wednesday, The Undergraduate Committee on Global Thought, in collaboration with GS Alliance and the Columbia University Science Journal, hosted a screening of “Born to Be,” a documentary that chronicles the work of Dr. Jess Ting at Mount Sinai Center for Transgender Medicine and Surgery in New York City. The screening at Fayerweather Hall was followed by a Q&A panel with the film’s director Tania Cypriano, producer Michelle Koo Hayashi, and Ting, the star of the film.

The documentary follows Ting, who was a general plastic surgeon before specializing in transgender medicine and surgery—a responsibility he took on at Mount Sinai Hospital that no one else would. A year prior to the film’s making, Ting had never performed gender reassignment surgery and had never interacted with a trans person. He and Cypriano reflected in the Q&A on how their interactions with trans patients transformed them.

“My work has been an eye-opening experience,” Ting said. “I’ve met remarkable people who were outside of my scope of life, and I was so moved by them. It would be a disservice to society for me to be doing anything else.”

While there is still a lot of work to do in the field of transgender medicine, the documentary highlights how Ting has pioneered a movement for improved trans medical practices: He has invented new surgical techniques for phalloplasty and vaginoplasty in order to decrease scarring and create more realistic outcomes. His department also gave birth to the first ever transgender surgical fellowship in the United States.

According to Cypriano, the project received pushback from some for supporting health care for trans people, including transitional surgery.

“A lot of people didn’t understand this project, but these patients are the most incredible people I have ever met,” Cypriano said. “They are people who go through the hardest struggles to be their true selves.”

The screening of the film on campus explores the role of transgender medicine in Columbia’s social and cultural life. UCGT is a committee appointed by University President Lee Bollinger with the goal of expanding Columbia’s global presence and outreach. Their collaboration with the GS Alliance, a group dedicated to the concerns of the LGBTQ community, and the Columbia Undergraduate Science Journal, a publication dedicated to cutting-edge scientific research, was meant to incorporate both the social justice and scientific perspectives on transgender medicine into the event.

“Even though we are in a progressive, urban area, events like this on college campuses create open minds and a comfortable space for undergraduates who are grappling with issues of otherness,” UCGT chair David Chen, CC ’22, said. He emphasized that transgender medicine is not only a local issue in New York but also a global issue that deserves humanization.

The film depicts gender reassignment surgery as an emotionally intense, time-consuming, yet rewarding experience. The most emotional scenes revealed moments of happiness and relief for patients at the result of a successful surgery. Patients cried, laughed, played music, and danced—all because they were finally comfortable in their own bodies.

The process leading up to such moments, however, was not easy. Patients waited up to three months for a consultation, and oftentimes, appointments were canceled or rescheduled due to the lack of properly-equipped medical staff.

The hectic nature of the transition process intensified throughout the film. Many of the patients dealt with—and continue to deal with—depression, homelessness, bigotry, and a lack of societal acceptance. Ting revealed that a patient who was on a waitlist for surgery took their own life, changing his perspective on the urgency of these surgeries.

The trans community has one of the highest suicide rates in America.

A particularly intense scene in the film shows the aftermath of a patient named Devin’s suicide attempt after her surgery. In the scene, the patient’s family is shown comforting Devin, who is shaking in distress in her hospital bed. The patient’s grandmother mentions how even after fully transitioning, Devin still faces a society that will not accept her and/or let her escape her past.

“I want to encourage trans people to realize that transitional surgery does not cure depression,” Cypriano said. “If I were to have focused on anything more in this film, it would be the toll that mental illness takes on trans people.”

Cypriano reflected on how we are living in a time in which health insurance plans are required to cover gender reassignment surgery in New York, indicating progress towards the acceptance of trans people in the medical field and society.

“How many of you feel like you know more about the trans experience and feel more empathetic towards trans people after watching this film?” Ting asked the audience at the event.

Everyone raised their hand.