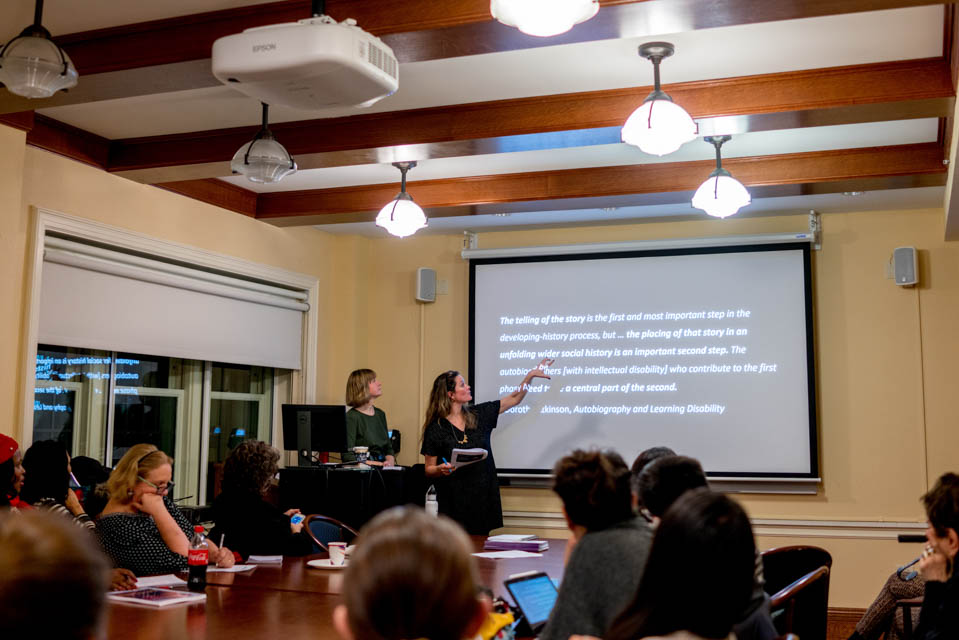 “Men are nothing but trouble!” Jennifer, a resident at Selinsgrove Center in Pennsylvania, exclaimed, inciting laughter from her interviewer and caregiver. Her interviewer had asked if she had found a boyfriend during her eight years at Selinsgrove, a live-in care institution for people with intellectual disabilities.

The event focused on telling the stories of people like Jennifer, who are residents of Pennsylvania’s institutions, in order to explore and challenge the practice of oral history, consider different approaches to sharing residents’ stories, and bring their voices into the nuanced conversation around institutionalization, both past and present.

According to Starecheski, oral history is defined as “an ethical practice of producing knowledge about the past through listening and dialogue,” which she said often looks like a formal interview. Through exploring the stories of institutionalized people, Berger and Sonneborn’s work grapples with the limits of oral history.

In confronting these limits, the oral history series aims to ask what the practice looks like “if we center that ethical, collaborative process of listening and of making meaning together rather than fetishizing the oral, and thinking about how [we can] learn and understand the stories of people who don't speak or who don't speak much,” Starecheski said.

This week’s event focused on the time Berger and Sonneborn spent at the Selinsgrove Center, where they spoke to residents whom they referred to as people with intellectual disabilities. Many of the residents had previously shared their stories through the interview-based installation “Here.," which was part of the community programming that supported the play “A Fierce Kind of Love.”

“A Fierce Kind of Love” retells the story of Pennsylvania’s intellectual disability rights movement through “word, movement, and song to examine this remarkable (and largely untold) history and celebrate the struggle, activism and fierce love that fuels the desire for dignity.”

The multimedia installation “Here.” presented 19 interviews with residents of the facility as a representation of the beauty in struggle, loss, longing, and love.

In giving Selinsgrove’s residents the opportunity to share their stories, the installation, as well as oral history in general, “allows us to expand the community of who gets to speak in public,” Starecheski said.

Each of these projects reflects a different type of oral history: While “Here.” uses a more traditional style of interview, the repeatedly performed oral history in “A Fierce Kind of Love” displays an alternative, more dynamic and organic method.

The oral history projects presented Thursday night suggested a way of democratizing the practice of storytelling as “a powerful tool of doing the sort of magical, alchemical work of taking people’s firsthand experiences and turning them … into authoritative sources that can circulate in public,” Starecheski said.

For Selinsgrove’s residents, sharing their stories seemed empowering and enjoyable. But the practice of oral history doesn’t always have such “magical” outcomes. For those unable to listen or speak, the practice can actually be restrictive.

For deaf historians, “the connotation of orality is negative; it brings up a whole history of deaf people being forced to try and communicate orally and hampering their ability to communicate by doing that,” Starecheski said.

Later this semester, the oral history series will present an event led by deaf historians, who will share what they call “narrative history” using sign language rather than the spoken word.