Dahee Kwon reflects on being an interdisciplinary artist at Columbia

Dahee Kwon reflects on being an interdisciplinary artist at Columbia 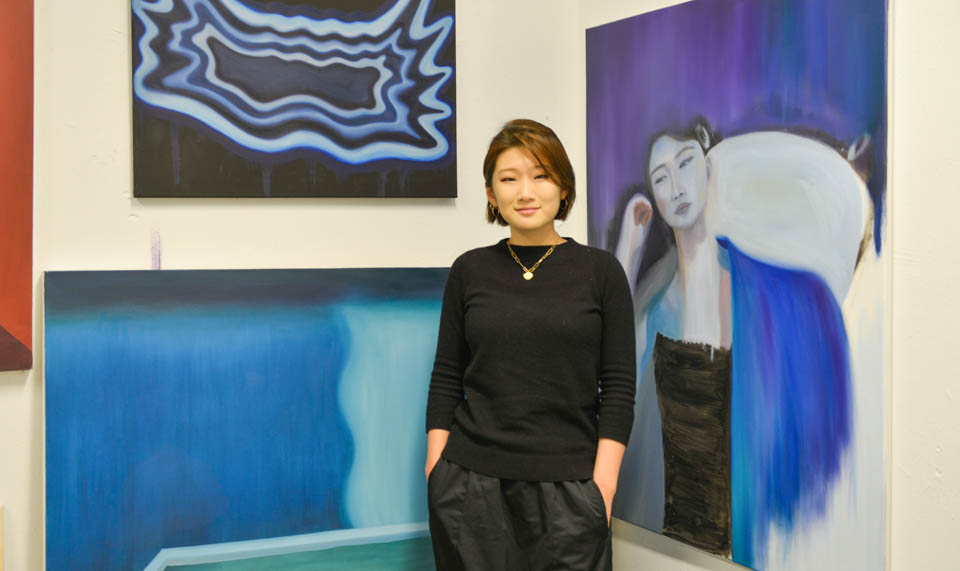 A visual artist and software engineer, Kwon discussed the lack of diversity and accessibility in the campus arts scene.

At 12 years old, Dahee Kwon, CC ’20, received a birthday gift that would kick-start her career as an artist: a sewing machine. She started sewing together pieces of her mother’s fabric into cushions, and today, she weaves together the contrasting fields of her majors: visual arts and computer science. At Columbia, Kwon is an aspiring visual artist who primarily works with oil paint.

Kwon aims to find the overlap between her chosen fields of study both on and off campus and navigate the resources available to accommodate her interests. Kwon has used Columbia’s resources to experiment with different mediums outside of her comfort zone of painting; she took two printmaking classes, where she explored the silk screen and intaglio techniques.

“I think I’m still trying to figure out that overlap. … I want to bring in my skills in computer science to do things,” Kwon said. “I’ve been doing some front-end development work, [and] user-interface design also ties in with visual aspects of computer science. I think my design skills have contributed to that.”

While some schools emphasize the option to major in disparate fields, Kwon expressed her concern for Columbia’s limited opportunities to pursue cross-disciplinary study, as the school does not currently provide a track to pursue a combined degree in her chosen fields.

Kwon noted that she often struggled to get involved with organizations on campus pertaining to her interests. Throughout her four years, Kwon has become increasingly aware of the lack of community in the arts, especially with regard to her unique passions, such as game design.

“I definitely wish there were more design or fashion courses I could take. I know there’s a couple active clubs, but it’s not exactly clear what kind of art opportunities there are,” Kwon said. “If there’s a resource to guide people through that, that may be helpful.”

Despite barriers to inclusivity and accessibility within the arts community, Kwon has found opportunities through diverse communities like the Chinese Students Club. After modeling for CSC’s annual Lunar Gala, Kwon went on to design and direct a scene in the 2018 show.

“It was really exciting that I could do everything on my own. I made pieces and then also a lot of accessories, and incorporated music that fits into the clothing line and choreographed the whole thing, which was a really interesting experience, making art and making clothes,” Kwon said.

Her experience with CSC extends beyond the stage of the Lunar Gala, as it continues to impact her work and the way she processes her oil paintings.

“[Lunar Gala] definitely made me think about how people interact with my artwork. … One other project I did last year was I created a hanging sculpture [that] people can walk into. That kind of work was also influenced by Lunar Gala and being able to manipulate the environment that the piece is being viewed in,” Kwon said.

For the gala, Kwon hung fabric from the ceiling and soundtracked the scene with the sounds of pouring rain. Models walked the runway in intricate threaded pieces that evoked an avant-garde style, and they carried umbrellas. Kwon’s solemn and sophisticated scene closed the show.

As a Korean, Kwon noted her ongoing struggle with publicly showcasing her art due to the Eurocentrism she sees in Columbia’s art departments, and how she felt that has limited her ability to explore art against the Western grain.

“Art [Humanities] is so Western-focused. There’s not that much diversity in that, and I find [that to be] a problem,” Kwon said. “The art scene in general, not even just in Columbia, is very Western focus[ed]. I guess the quality of art, all these judgments are made with Western standards.”

Currently, Kwon is working on two oil paintings: a self-portrait and a perspective piece. She intends to focus on incorporating abstraction into these works, rather than keeping it entirely literal. In addition to the paintings, Kwon is constantly brainstorming new ideas for pieces, including some that explore the past in the context of the present.

“I want to try a painting on different kinds of fabric. … Right now, I’m thinking of silky kinds of fabric,” Kwon said. “I was really inspired by this piece … by Judy Chicago called ‘The Dinner Party,’ that was a really significant work in the ’70s feminist art period. I want to make a painting that is kind of inspired by looking at how feminist art plays into or can be translated into more modern contexts.”

Although visual art is currently an essential part of her life and studies, Kwon’s professional career will focus more on computer science, at least for now. She recently was offered a job in the Bay Area as a software engineer in a product development team.

“I guess painting would be more of a side thing, and maybe in the future, I do want to further my career in the arts, but for now I’m going to be working in a tech company.”

Although it was her sewing machine and constructive criticism from her mother that got Kwon started, it is her critical eye, global mindset, and multidisciplinary approach that have made her passion persist. While she continues to piece together her love for visual arts and computer science, Kwon hopes that Columbia can work on assembling diverse communities and creating accessible opportunities for interdisciplinary creators within the campus art scene.

Editor’s note: Kwon formerly worked at Spectator as an illustrator. She is no longer involved with Spectator, and no one from the illustrations team was involved in the writing or editing of this article.