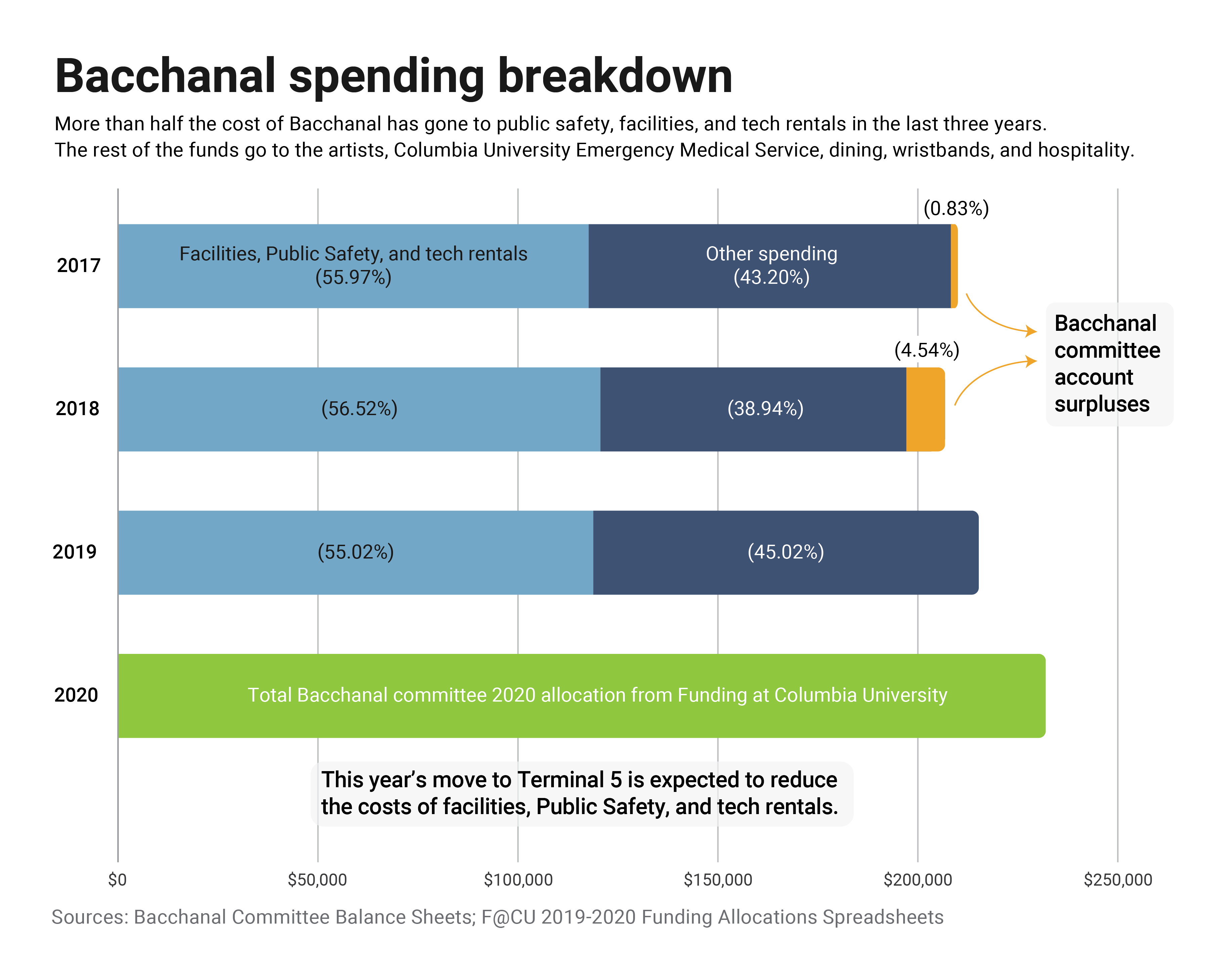 The Bacchanal Committee’s concert expenditures and funding processes are generally unknown to the student body. Spectator takes a closer look at the cash flow.

In deciding to move Columbia’s undergraduate spring concert to an off-campus venue, the Bacchanal committee cited the need to reserve funds for hiring the headlining artists. In response, students voiced concerns over the decision’s threat to Bacchanal’s culture as Columbia’s only community-wide undergraduate event.

But the committee has since maintained its confidence in the decision, pointing repeatedly to financial strains of campus security and facilities.

“Terminal 5 was obviously a good choice with our budget. It made sense financially for us,” Bacchanal committee co-president Joy Barrett, BC ’20, said. “There wasn’t any real reason to go against the decision.”

So how much money does it take to bring Columbia’s day of campus revelry to life, and is the cost enough to warrant the move to a new location like Terminal 5? In covering the committee’s decision to move Bacchanal, Spectator sought to understand the Bacchanal committee’s funding process and the cost breakdown of each spring concert between 2017 and 2019.

While the Bacchanal committee declined to provide information on the costs associated with this year’s Terminal 5 concert, Spectator has viewed the financial breakdown of all line item costs for the concerts between 2017 and 2019.

Data indicates that the most expensive portion of the event was the setup cost: facilities, security, and tech-equipment rentals. These items consistently dominated the Bacchanal committee’s budget, annually taking up more than half of its allocated funds.

Historically, the Bacchanal committee has had a contentious history with Public Safety. The office has imposed last-minute changes to security measures in the past, which have altered the overall security costs without adequate warning. Resheff noted Public Safety’s and Facilities’ control of these costs and the Bacchanal committee’s struggle to adequately plan for unexpected expenses.

Due to the Bacchanal committee’s lack of control over these costs, Resheff was on board with the decision to move the concert off-campus, explaining that the idea had been brought up in the CCSC finance committee’s discussions as well.

“I’m a big proponent of this,” Resheff said. “I spoke to a friend at a peer institution who does concerts. They had done events at Terminal 5 where the entire thing, setup, security, tech, everything, was in the range of $55,000 to $60,000. This would totally get around all of these enormous administrative costs.”

If those numbers hold true for this year’s Bacchanal at Terminal 5, the concert’s setup cost will go down 72 to 75 percent from 2019 while taking up only 23 to 25 percent of this year’s budget. This does not include cost estimations for the daytime portion of the event, which will still take place on campus. Barrett echoed Resheff’s claims, stating that the move to Terminal 5 will decrease setup costs by 25 percent. This change, she said, allowed the committee to increase its artist budget by 33 percent.

The data also indicates that the most unpredictable—and second-most pricey—financial factor for the Bacchanal committee was the artist cost. However, this is also the cost that the committee has the most control over, more so than security, facilities, and tech costs. In 2018, artist-related costs decreased by 8.4 percent from 2017. They then increased by 22.4 percent in 2019. 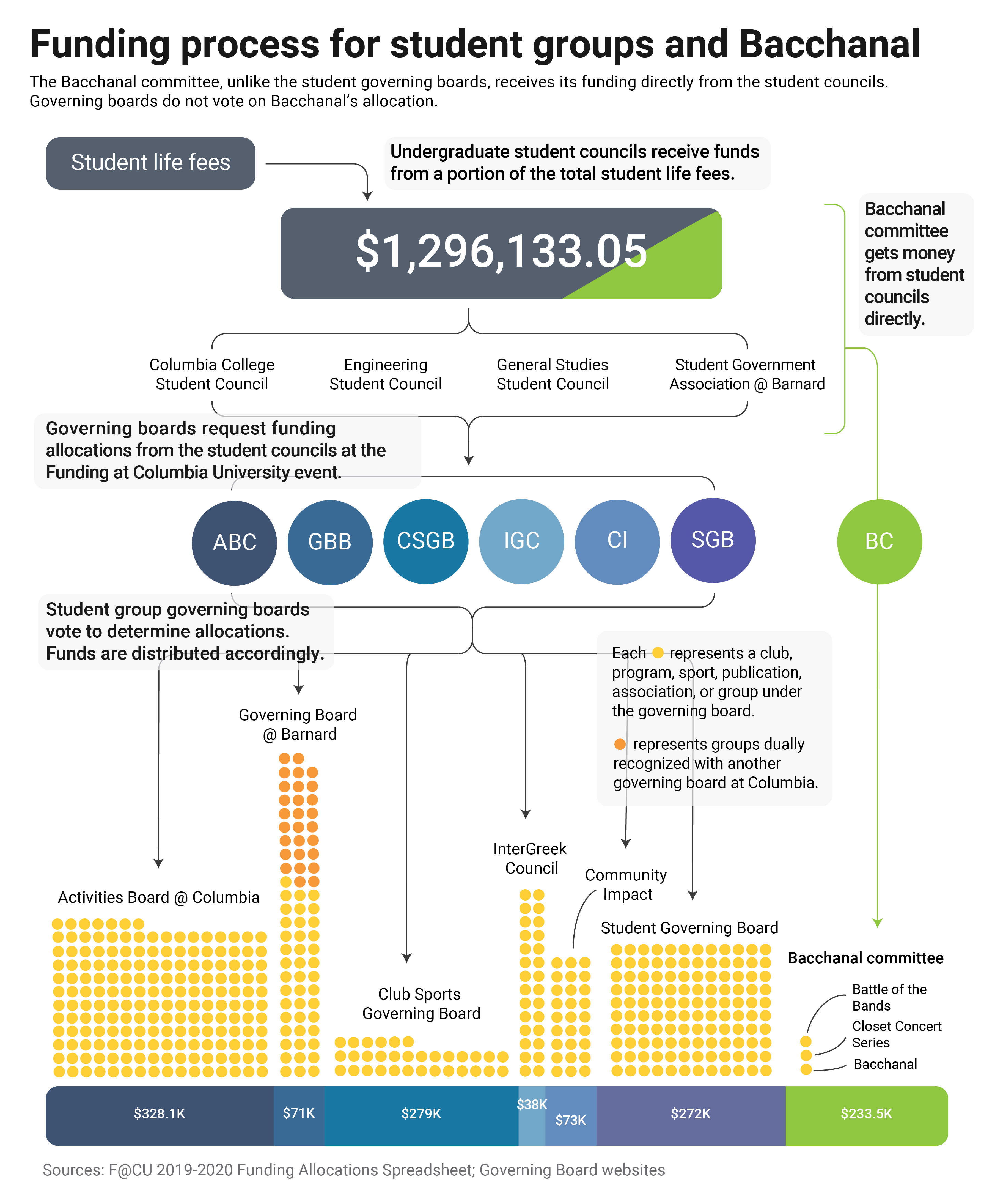 “To be transparent, the student councils didn’t vote on Terminal 5, but they did express support about it,” Schechter said. “But [they] didn't vote.”

Though the data suggests that the move to Terminal 5 might be sensible from a financial perspective, the question remains as to whether these cost-cutting measures will benefit the concert’s culture.