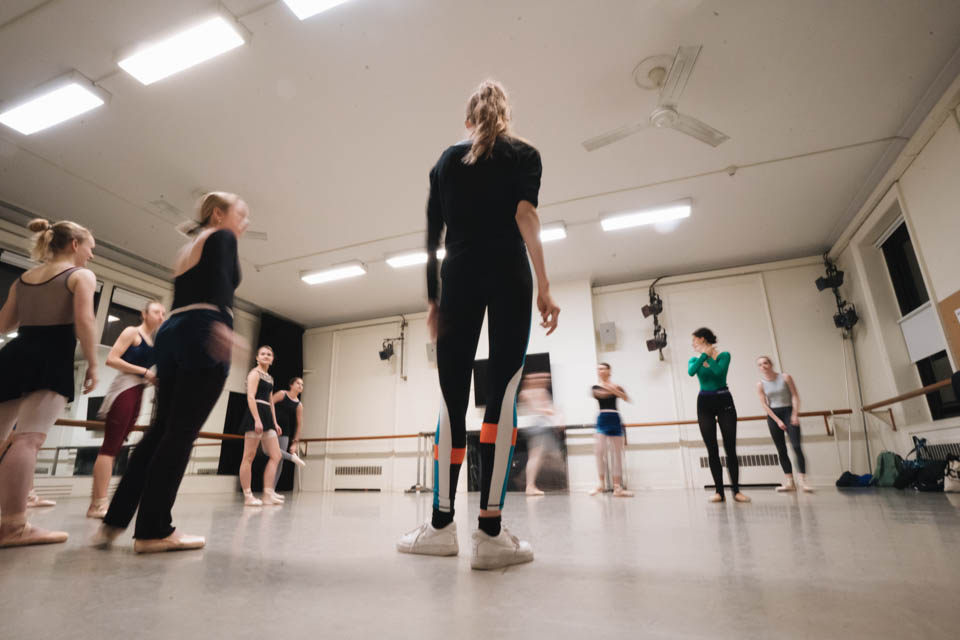 A School of General Studies student by day, Christina Clark straps on her pointe shoes by night to perform with New York City Ballet, one of the nation’s premier ballet companies.

Amid balancing a professional dance career and her coursework, Clark still manages to immerse herself in the Columbia dance scene. This semester, she will serve as the student choreographer for Columbia Ballet Collaborative, a student-run dance group with an emphasis on curating new works every semester.

Of the five choreographers creating new works for CBC this semester, Clark is the only student. She will debut her piece in CBC’s spring performances alongside guest choreographers Danielle Diniz, Norbert De La Cruz III, Alexandra Hutchinson, and Gabe Stone Shayer.

Clark began her dance training at a time earlier than she can remember, in what she describes as a “mommy-and-me type class” setting. At seven years old, she was accepted to train at the School of American Ballet, the official ballet school of New York City Ballet. After graduating from SAB in 2016, she became an apprentice with NYCB, later rising to join the corps de ballet in August 2017.

Throughout her career, Clark has shared the studio with a number of renowned choreographers including Alexei Ratmansky, Justin Peck, and Gianna Reisen. She noted the significant influence each of these choreographers has had on her own approach to choreography.

“I’ve noticed with all of them that they come into the room with a concept and an idea, and they make it work with the dancers they have there,” Clark said. “I’ve been impressed with their ability to adapt their concept and translate their concept from their mind to the bodies that are in front of them, which I think is more difficult than you might expect.” 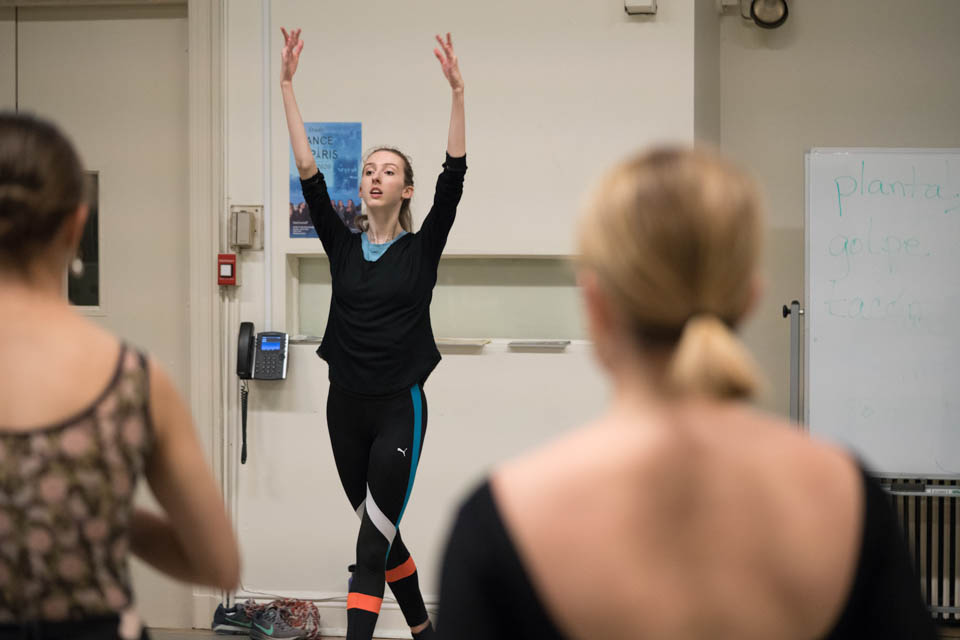 At age 15, Clark made her foray into choreography at the Chautauqua School of Dance’s Choreographic Workshop, where her work was performed at the Chautauqua School of Dance Gala. She subsequently created works for SAB’s Student Choreography Workshop, and for students at the SAB summer intensive. Her new work for CBC will be the first she has created since joining the company at NYCB.

“While my main focus right now is dance, when [Bridget Scanlon, BC ’20] approached me about maybe applying for the student choreographic spot this semester, I was really excited and sort of leapt at the opportunity to get to choreograph on a new group of people,” Clark said.

Despite choreographing for CBC and managing a full-time job, Clark also manages to squeeze in an 8:40 a.m. lecture before arriving at company class in Lincoln Center by 10:30. Balancing life as a student and a professional ballet dancer comes with its challenges, but Clark highlights the academic flexibility offered by the School of General Studies, which allows her to pursue her degree in a yet to be determined field at her own pace. She went on to note how her experiences in the classroom at Columbia compliment her work in the studio at NYCB.

“I love the campus. I love the people I’m in classes with. It’s great to be with a lot of different people,” Clark said. “I’ve found that the things I learn in class and from other students have informed my dancing and what I bring to work there, and then also vice versa, what I can bring to classes here,” she said.

Clark’s new work for CBC will feature a cast of 13 dancers: 12 women and one man. The work will unfold over three movements, beginning with a section she describes as sonically “mysterious,” followed by a traditional second movement pas de deux featuring two dancers, concluded by an “exciting” finale.

To accompany the movement, Clark has selected a suite of songs by Bryce Dessner, a composer and member of the rock band The National, all by the name “Murder Ballades.” She describes the sound as “dynamic” and is eager to incorporate music that departs from her previous work with classical music. She went on to add that she finds inspiration in a non-narrative approach to choreography similar to that of the neoclassical Balanchine tradition, from which NYCB and SAB derive their existence.

“The music is the main inspiration, and I’m trying to really stick to what that evokes, and bringing that to life on stage, and that might come from my background of being a Balanchine-trained dancer,” she said. 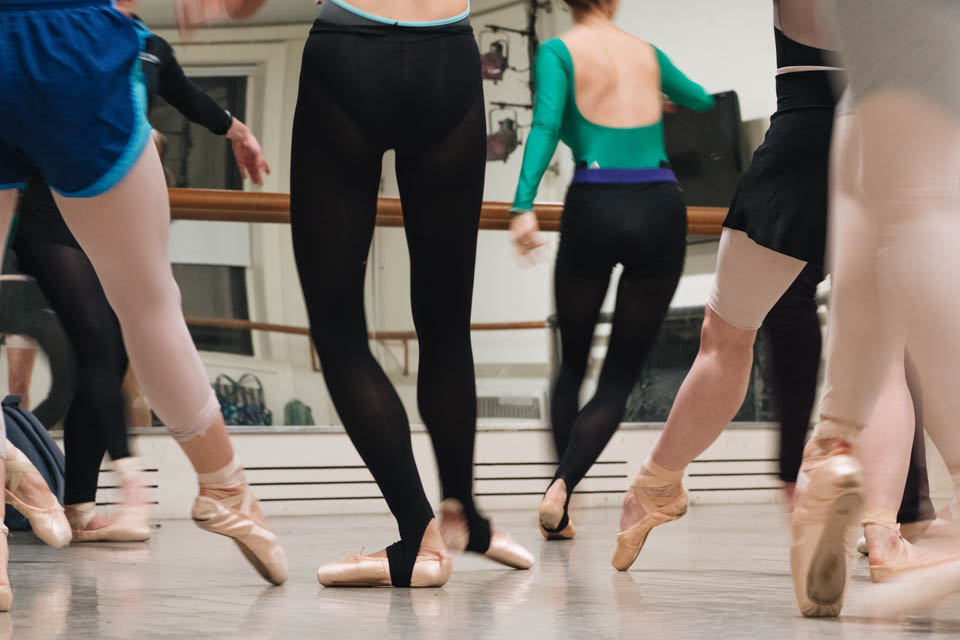 Additionally, Clark drew inspiration for her work from the Metropolitan Museum of Art. There, she said, she began to sense dynamism and movement embedded within the stillness of the paintings and sculptures. Although these works of art do not prescribe a specific narrative to the piece, they provide a framework that will inform the placement of dancers on stage.

“If I’m thinking of a formation or thinking of how I want to transition into something, it’s helped to have those benchmarks as sort of inspiration,” she said.

As the creative process pushes on, Clark looks forward to bringing her experiences as a dancer into the studio as a choreographer.

“It’s just daunting to start the rehearsal process and be that person in the front of the room, but I like that. I’ve always sort of liked having that voice,” Clark said.

That voice will continue to develop in collaboration with the dancers as the process unfolds. The final work will be presented in May at the Miller Theatre.