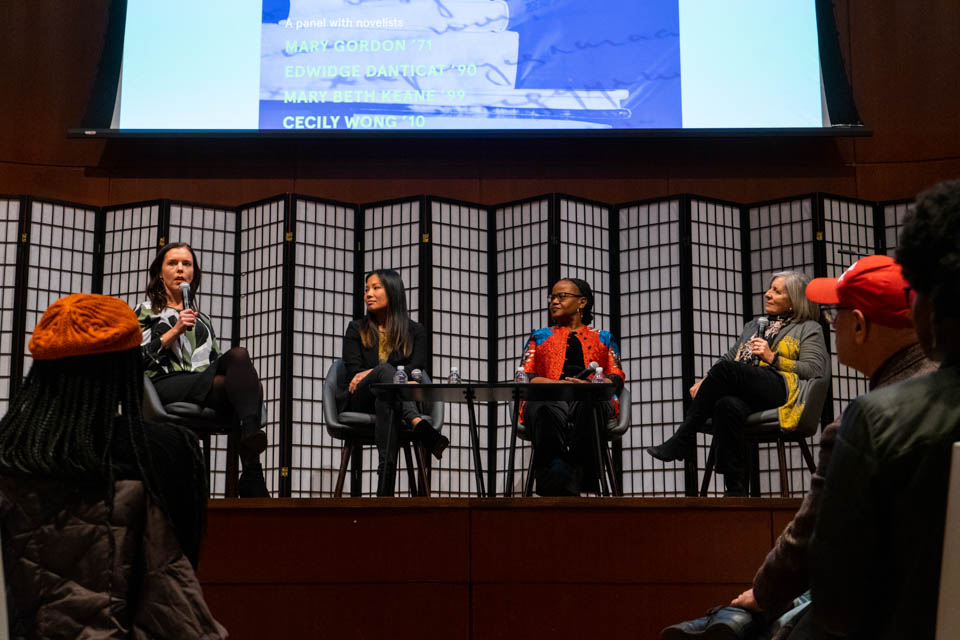 Spanning generations, genres, and backgrounds, the authors-turned-panelists at the “Coming to Barnard” talk on Feb. 20 had one essential trait in common: They were all first-generation college students at Barnard back in the day; or, as English professor Mary Gordon, BC ’71, put it more comically, “We are not of the group whose parents wrote our college essays for us.”

The event, entitled “Coming to Barnard: First-Generation Writers Talk About Learning their Art,” had panelists speak about the unique challenges that first-generation students face; it was held at the Diana Center’s Event Oval. The panel was introduced by Provost Linda Bell, moderated by Gordon, and comprised of novelists Edwidge Danticat, BC ’90; Mary Beth Keane, BC ’99; and Cecily Wong, BC ’10.

Danticat, known for her novel “Breath, Eyes, Memory,” is an internationally-acclaimed novelist and 2009 MacArthur fellow. Keane was awarded a Guggenheim Fellowship for Fiction in 2015, while Wong’s novel “Diamond Head” was published by Harper Collins in 2015.

Gordon first asked the novelists how they navigated the college process, especially coming from families not well versed in the admissions process. Although each writer had their own unique story, some parallels emerged: Gordon and Danticat were both commuters, Keane and Wong were both transfers from colleges near their homes, and Danticat and Keane were both children of immigrants.

Despite the daunting prospect of pursuing higher education, the writers all recalled a deep enthusiasm and a generous support system that drove them to Barnard.

“I remember one recruiter came from Barnard and spoke to our class, and it sounded like, ‘Oh, this would be so perfect! This is where I want to go!’ I had never heard about the school before then,” Danticat said.

Gordon was prompted by a literary dream, rather than programs for prospective students.

“I had read ‘Franny and Zooey’ by [former Columbia student] J.D. Salinger, and Seymour Glass had gone to Columbia, and I wanted to meet Seymour Glass,” she said, inciting laughter from audience members.

However, when she finally applied to Barnard, Gordon faced the first of many barriers to accessing higher education: Her principal refused to send her transcripts.

For Wong, coming to New York was the realization of an adolescent obsession with the city. Beyond its ideal location, Wong said, Barnard offered crucial affordability, as the college commits to providing 100 percent demonstrated financial need. Keane reflected on her similar vision of an idyllic college experience—and the obstacles that stood in her way.

But even without a cinematic East Coast college trip, and despite the grueling work of filling out FAFSA forms with parents who refused to tell her their yearly income, Keane nevertheless made her way to Barnard.

What each novelist discovered upon arrival, though, was that coming to Barnard was only half of the battle.

Keane recalled literary elitism in the classroom as an early source of culture shock, citing her lack of familiarity with the canon that her peers knew well.

“There were all of these books that everyone had heard of, but I knew that I hadn’t heard of them—and I certainly hadn’t read them,” she said. “I felt really dumb for a long time.”

Elitism was pervasive outside the classroom too. Gordon noted that the class differential was brutally apparent.

“I remember being on a geology field trip and I wrecked my boots, and this other young woman had wrecked her boots and she said, ‘I’m just gonna go to Bergdorf and get another pair!’ I wanted to say, ‘Why don’t you just die in a fire!’” Gordon said, eliciting laughter from the crowd.

As they navigated a new world on campus, the panelists also described a divide that arose between them and their family members as they engrossed themselves in literary tradition.

Keane described how her family supported her as she pursued an English degree, despite the disconnect between their life experiences.

“[My college experience] was a mixture of just complete disorientation for them, and pride. … [My dad] would just say, ‘What was the point of coming to America if you can't be whatever you want to be? That was the whole purpose,’” she said.

As a commuter, Gordon often felt that she had to hide her college life from her mother, noting her involvement in the historic 1968 demonstrations, in which students protested various issues of the era from the Vietnam War to racial discrimination.

“In the spring it was the Columbia strikes [of 1968], so I would, by day, be occupying buildings, and then get on the subway and go home. My mother would say, ‘How was school?’ [and I would respond], ‘Fine,’” she said with a laugh. “If I really wanted to stay for a demonstration, I'd say I had to stay really late at the library.”

Regardless of these moments of disconnect, each of the authors found a way to thrive at Barnard, thanks in large part to the school’s support and professors like Gordon, who taught Wong and Keane.

Gordon ended the panel by describing her graduation, at which the familial and educational cultural divides she’d maneuvered for four years finally collided.

She recalled when two of her mentors at Barnard, one of whom had secured her a $500 summer grant that allowed her to pursue writing instead of working all summer, approached Gordon’s mother. She recalled that her mother “gripped the side of the chair like wild animals were coming at her.”

An audience member then asked whether these mentors had become like second mothers to Gordon, and she insisted that they hadn’t. The opportunities Barnard offered Gordon, and which it continues to offer current first-generation students, could never surpass the foundation her family provided. Despite how different Gordon and her mother had become in the span of four years, Gordon saw her mother’s acceptance of this difference as a gift.

“She had no notion of what literature was, or what a writer was, but she knew it would take me away from her, and she let me go. And I kind of think that's the most generous thing a mother could do. She didn’t get it, but she let me go.”