MaMa Project’s “Worth Saving” is worth remembering

MaMa Project’s “Worth Saving” is worth remembering 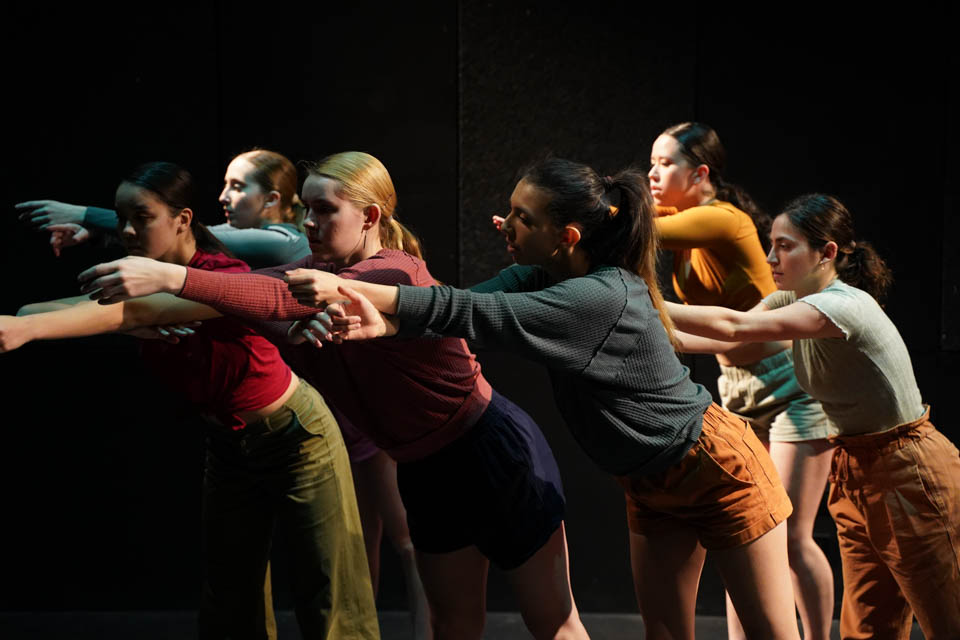 This year's iteration of the annual dance show drew inspiration from our tendencies to hold on to physical objects as a means of holding on to the past.

If you take a look in your desk drawers, you may notice objects that have sat there uselessly for months but evoke memories so rich that you are unable to part with them. Choreographer Zoe Novello, BC ’21, sees endless opportunities embedded within these objects, using dance as a means to reconnect with the past through the body.

The MaMa Project, the annual satellite venture sponsored by the all-inclusive dance group, Orchesis, premiered this weekend at the Glicker-Milstein Theatre. The evening-length work, titled “Worth Saving,” was choreographed by Novello in collaboration with an ensemble of six dancers.

The MaMa Project was conceived back in 2002, when longtime Orchesis choreographers Marianne Fitchtel and Maya Escueta, both CC ’02, approached the board about sponsoring a joint choreographic initiative. They called their work “The Alice Project,” and later combined this title with the first two letters of their names to form the now annual MaMa Project.

This year, Novello’s chosen title, “Worth Saving,” was inspired by vivid memories that become intertwined with inanimate objects over time.

“I began thinking about this very specifically in terms of letters that I’ve collected over the years that people have written me or that I have written to other people, and then I think it slowly evolved into just generally things that we collect, and how that is a form of remembering that can be similar or different to the way we remember things like embodied memory,” Novello said.

Novello’s cast brought those memories to life over two acts. With the exception of the opening and closing acts, the work was divided into sections named after the objects that inspired them. These objects included plane tickets, journals, socks, and pressed flowers.

The dancers were dressed in earth tones, wearing clothes that could transition seamlessly from street to studio. This gave the work an overall sense of casualness, indicating the ever-present and everyday nature of the memories that inspired it.

In order to cultivate a sense of setting for the audience, some of the sections featured tracks with sounds from nature that included crickets and chirping birds. These were a demonstration of the capability that specific objects have to transport us beyond the present into very particular moments and places in the past.

In the section “Letter From,” dancer Emma Danon, CC ’23, performed a solo to “A Model of the Universe” by Jóhann Jóhannsson, overlaid by “Rolling Waves: Ocean Sleep Sound” by Sleep Water Sounds. The sound of the waves crashing to shore coupled with her sweeping extremities evoked a breezy day by the ocean and transported both the dancer and her audience beyond the cold New York winter.

In her introspective solo titled “Journal,” Kendra Borden, CC ’22, danced soaked in blue light. The feeling generated by the marriage of movement in circles about the stage and lighting was one of searching for something, or yearning for something lost. This thoughtful lighting design, led by Thea Konefal, BC ’22, gave each section of the work its own unique ambiance, which was aided by the colors and patterns generated by the lights.

Perhaps one of the most noteworthy qualities of “Worth Saving” was the way that the dancers watched one another on stage. There was a palpable sense of care shared between the cast that felt too real to have been merely performative.

This was apparent in the opening movement, aptly titled “Opening,” which featured the entire cast. While each dancer performed their own sequence of steps, they looked to their fellow castmates on stage during moments of stillness. This gaze was non-judgmental, full of intention, and above all, gentle.

The theme of mutual care resurged multiple times throughout the performance, as the choreography often called for the dancers to lean on each other. In the context of the piece, perhaps this was meant to signal that although our memories are individual to us, we are invited to lean on those we care about as we grapple with them.