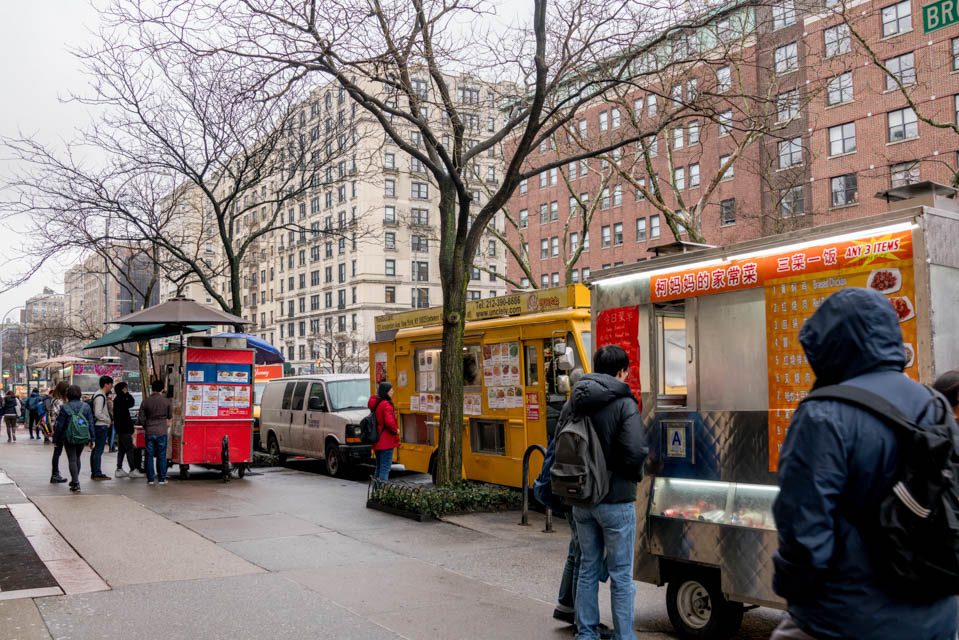 Over 10 food trucks serving cuisines ranging from Himalayan to Sichuan to Peruvian park outside Columbia’s gates on Broadway daily.

New York is one of the United States’ food truck capitals, with 5,100 mobile food vending permits in existence and 500 belonging to food truck operators. The city is best known for its numerous halal, hot dog, and nuts carts, but more diverse mobile food spots have also sprung up around Columbia’s campus over the past few years.

Every day, over 10 food trucks serving cuisines ranging from Himalayan to Sichuanese to Peruvian park outside Columbia’s gates on Broadway. Students, faculty, and Morningside Heights locals alike seek out everything from burrito bowls to souvlaki to duck head. Despite high permit and utility costs, the food truck scene has grown near Columbia, with a handful of food trucks joining the local food scene just a few months ago. Although many students pass by these food trucks regularly, not all students have checked them out—but they should. 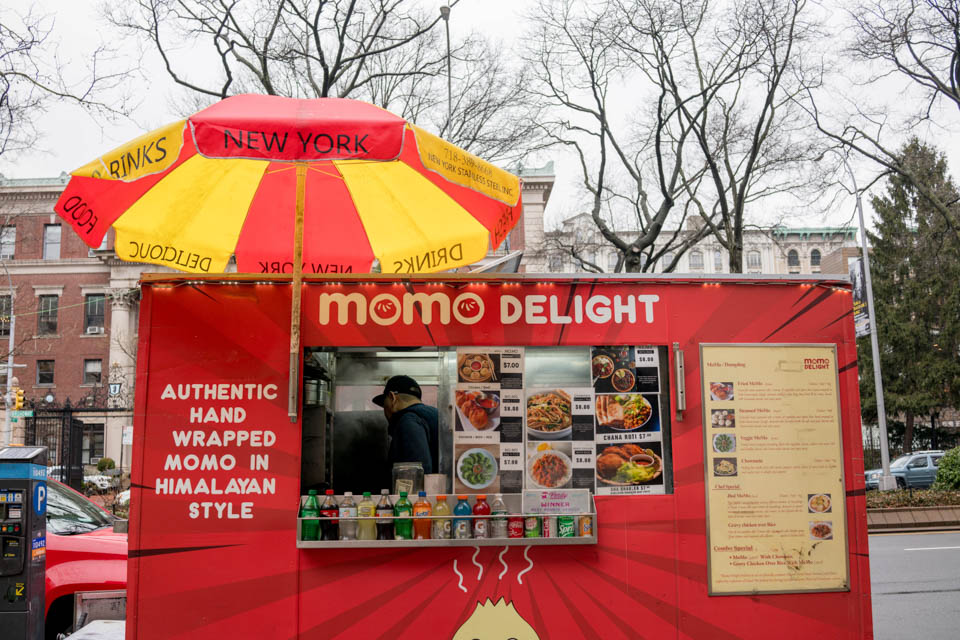 Momo Delight, located right outside the Earl Hall gates, offers a selection of Himalayan dishes inspired by Nepalese, Tibetan, and Newar cooking. Himalayan cuisine reflects the region and its mountainous geography, where dairy from yaks or goats is prominent; ingredients like butter and yogurt feature heavily in many dishes. Many Tibetan plates also feature meat and noodles, often served spicy with refreshing green vegetables.

Owner Panden Panden noted that many Columbia students used to travel downtown to his food truck, so he decided to relocate to Columbia to meet the demand.

Momo Delight specializes in its namesake dish, momos, which are plump, juicy dumplings stuffed with either grass-fed beef, chicken, or vegetables along with ingredients like garlic, ginger, and cilantro. Momo Delight offers both fried and steamed momos, which are served with sepen, a Tibetan hot sauce prepared with tomatoes and chilies. Vegetable momos are filled with cabbage, cheese, scallions, and spices and wrapped in a green dumpling skin. 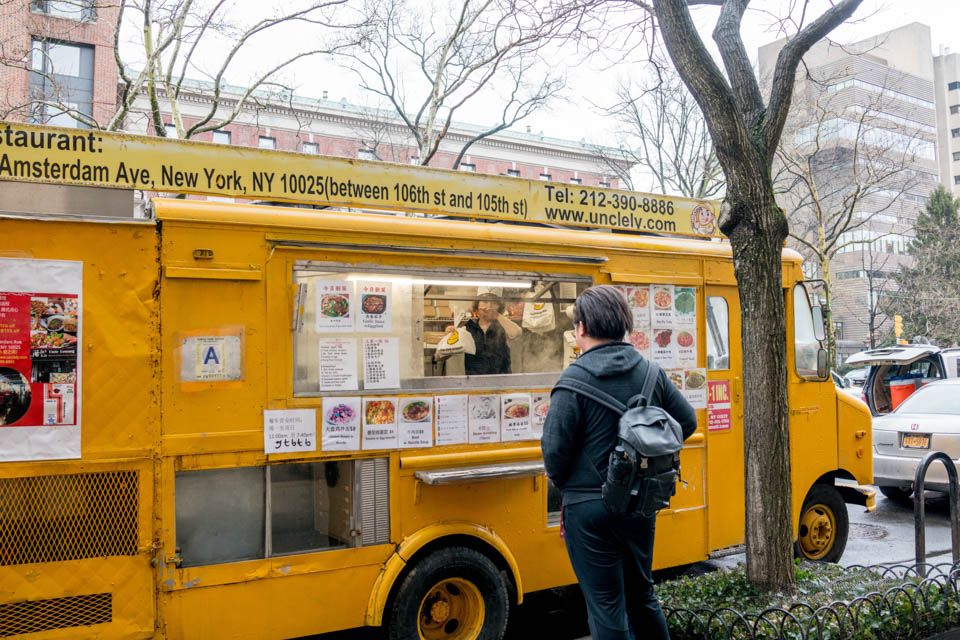 A long-time staple of the Columbia food truck scene, Uncle Luoyang, which has a permanent location at 928 Amsterdam Ave., specializes in Chinese fare, specifically from Sichuan and Henan. These cuisines are typically spicy, with many dishes featuring proteins like beef and pork along with onion, chili, and herbs. Dishes are often stewed or fried and have a mixture of sour, bitter, and salty flavors.

Customers can pick three dishes over rice, ranging from braised spare ribs to tomato with egg to mapo tofu; the combination is just $8, making it a popular option. Other popular dishes include tender braised beef, celery with black mushroom, and chicken with potato. Uncle Luoyang also offers homemade steamed dumplings filled with pork. 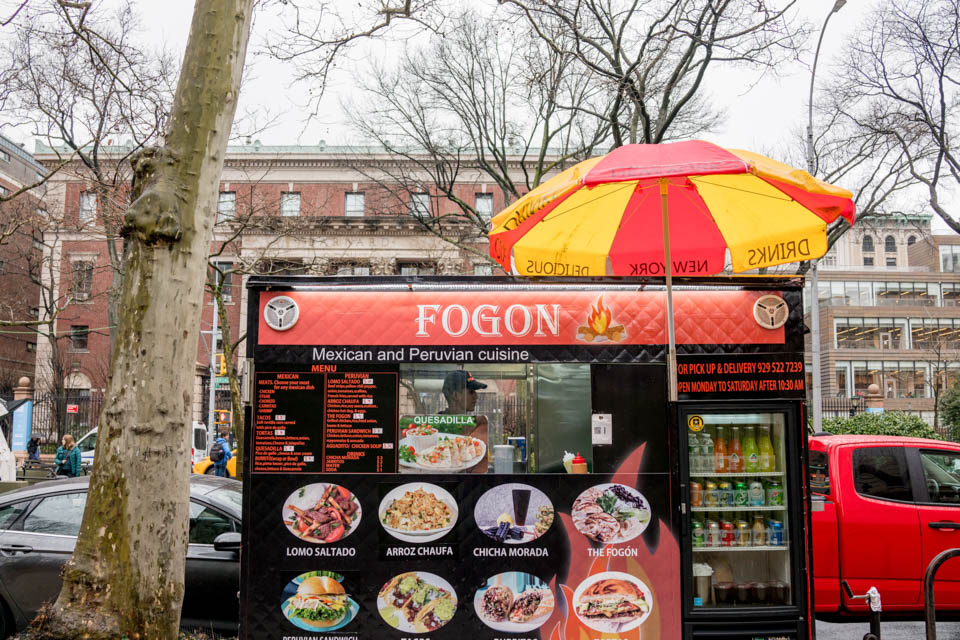 Fogon was opened in August 2019 by brothers Jose Grandez and Martin Lucana, who are from Peru. The food truck serves a variety of classic street-style fare, with the menu being split between Mexican and Peruvian classics. Modern Peruvian cuisine takes inspiration from indigenous populations like the Inca as well as from European influences, including Spanish and Italian cooking. Peruvian cuisine has four staple ingredients common in most dishes: corn, potatoes, quinoa, and legumes.

“We’re from Peru and we have Mexican friends, and we decided to mix the cuisines together,” Grandez said. “Most people like the food, so they come back. It’s nice to see them every day here.”

On the Mexican side are typical street foods including tacos with pico de gallo; quesadillas; burritos; and tortas, a Mexican sandwich, each served with either chicken, steak, chorizo, carnitas, or shrimp. The Peruvian side of the menu features dishes like lomo saltado, which consists of stewed beef strips served with yellow chili pepper, onion, french fries, and rice. Fogon’s namesake entree features grilled chicken, rice, fried onion, and beans, while its arroz chaufa includes a unique mix of chicken, soy sauce, hot dog, and eggs over rice. 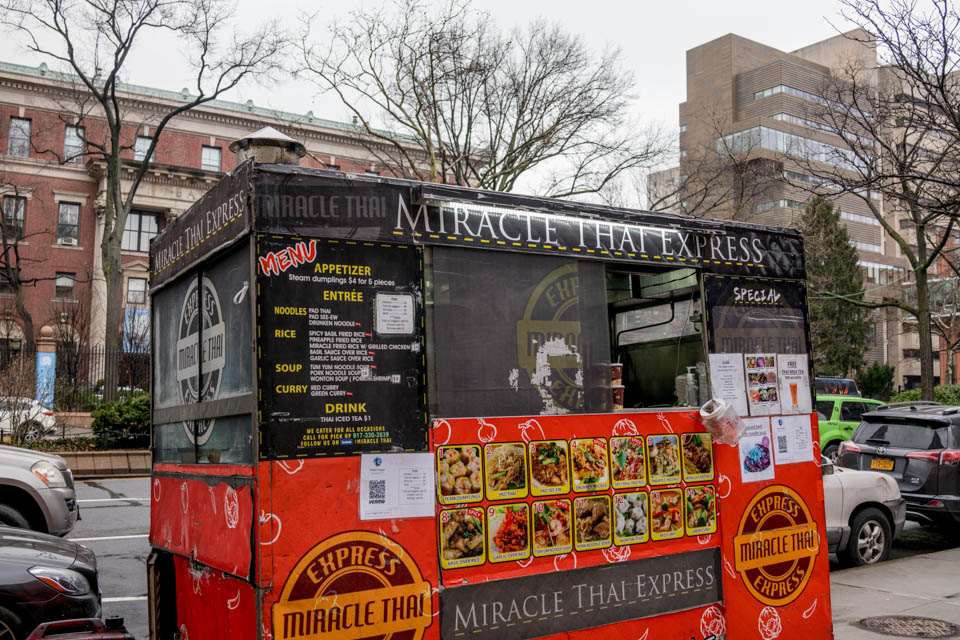 Miracle Thai Express offers some of the cheapest Thai fare in the Columbia area and a diverse menu. Known for its aromatic and spicy dishes, Thai cuisine features herbs, garlic, galangal, and chilies.

Similar to Chinese Siu Mai, Miracle Thai Express offers steamed dumplings filled with ground pork with a yellow skin. Noodle dishes like pad thai, spicy drunken noodles, and stir-fried pad see ew are very popular, as are rice dishes like spicy basil fried rice and rice with garlic sauce. Vibrant dishes like red curry and green curry are served with herbs and your choice of chicken, tofu, or shrimp, while soups like tom yum offer a hot and sour contrast. 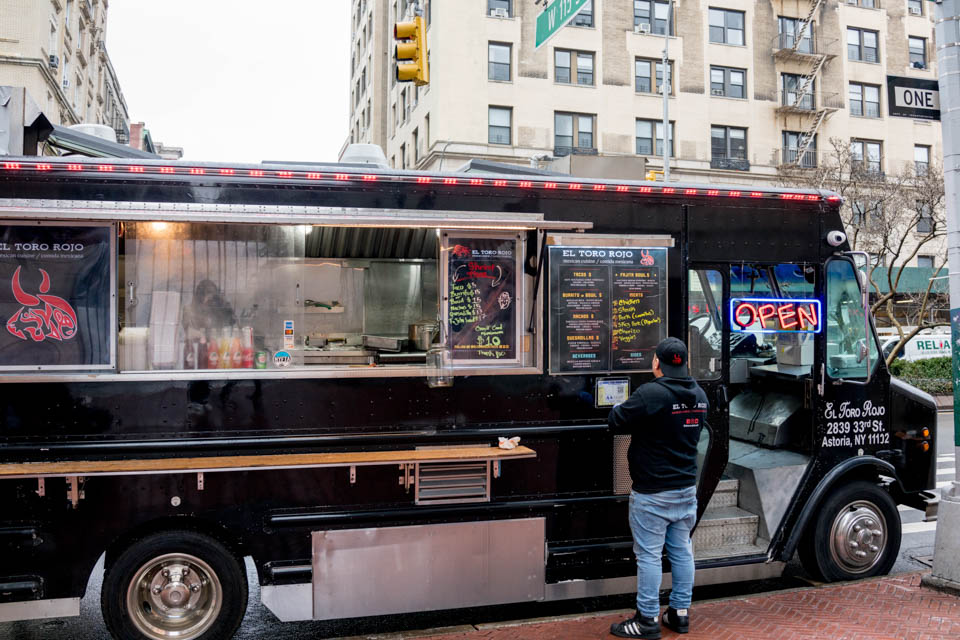 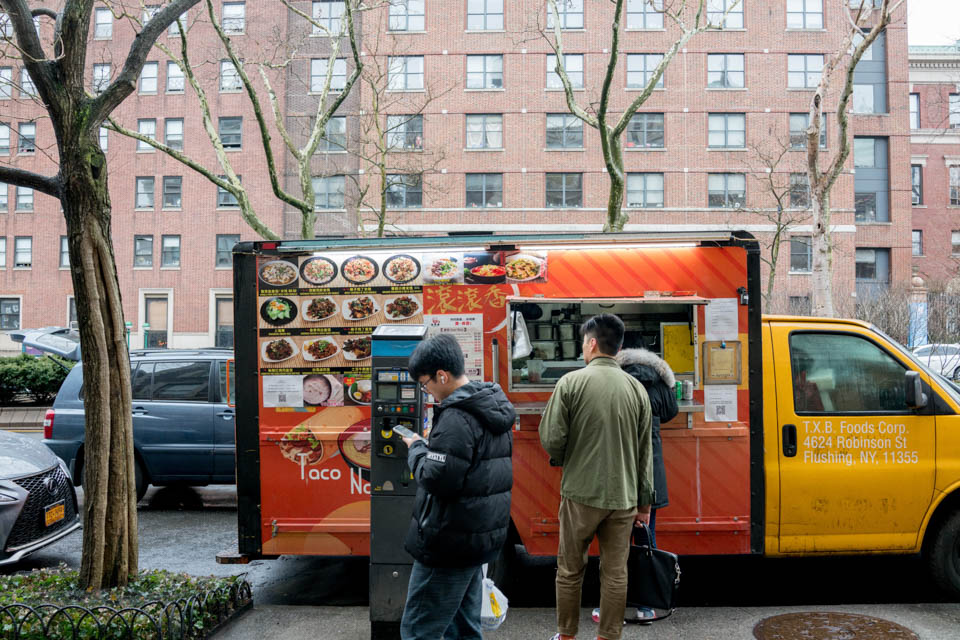 Relatively new to Columbia’s food truck scene, Rolling Yummy offers a diverse spread of dishes from Shanghai, Taiwan, and Sichuan. Shanghainese cuisine tends to be less spicy and more seafood-heavy than Sichuanese cuisine, while Taiwanese cuisine is more reminiscent of Fujianese cuisine with a greater reliance on fruit and grains.

Popular dishes include Taiwanese braised pork over rice with boiled egg, spicy broiled fish with sliced noodles, and pickled fish over rice. Options like Szechuan pickled gizzard are surprising finds at a food truck, but more standard dishes on the menu include shredded chicken with garlic sauce and rice noodles with chicken. Rolling Yummy also offers a combination similar to Uncle Luoyang, in which diners can choose any two items with rice or rice noodles for $8.50. 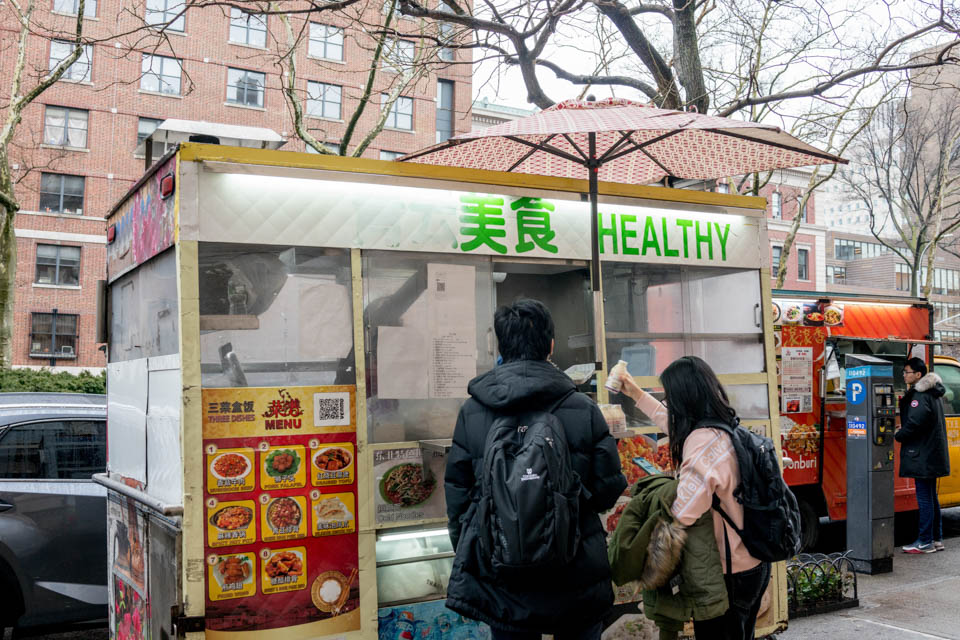 With a similar menu to Uncle Luoyang, Healthy offers a selection of Sichuanese and Northern Chinese delicacies along with some more unconventional options. Healthy offers a three-dish combination, in which diners can pick between dishes like braised chicken, pork with bamboo, steamed vegetables, and Yuxiang shredded pork. Also available are Chinese hamburgers, steamed dumplings, potato wraps, and Taiwanese-style beef noodle soup with a dark broth. Healthy also offers a selection of traditional proteins like duck head, duck tongue, and pig ear, prepared in spicy Sichuan sauces. 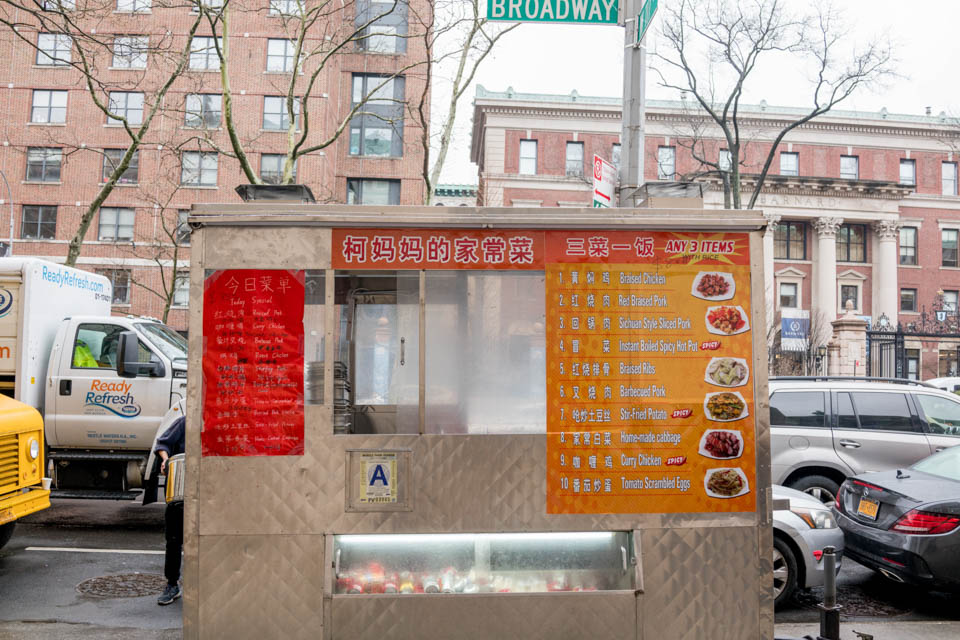 Souvlaki GR, which operates at permanent locations in Midtown West, Midtown East, and on the Lower East Side, has a food truck that comes to Columbia at night. Founded by a first-generation Greek family, Souvlaki GR takes inspiration from the flavors of Mykonos, a region known for its seafood. The food truck serves classic dishes like moussaka, a hearty eggplant casserole; pastitsio, a pasta dish with ground meat and bechamel sauce; and louza, a Greek prosciutto.

Although the food truck features a very abridged menu, Souvlaki GR is best known for its pitas, made with your choice of chicken, shrimp, Greek sausage, or veggie—all served with french fries, Greek salad, and tzatziki sauce. Also popular are its Greek fries and various dips, which include homemade hummus, eggplant, spicy feta, and tzatziki dip.