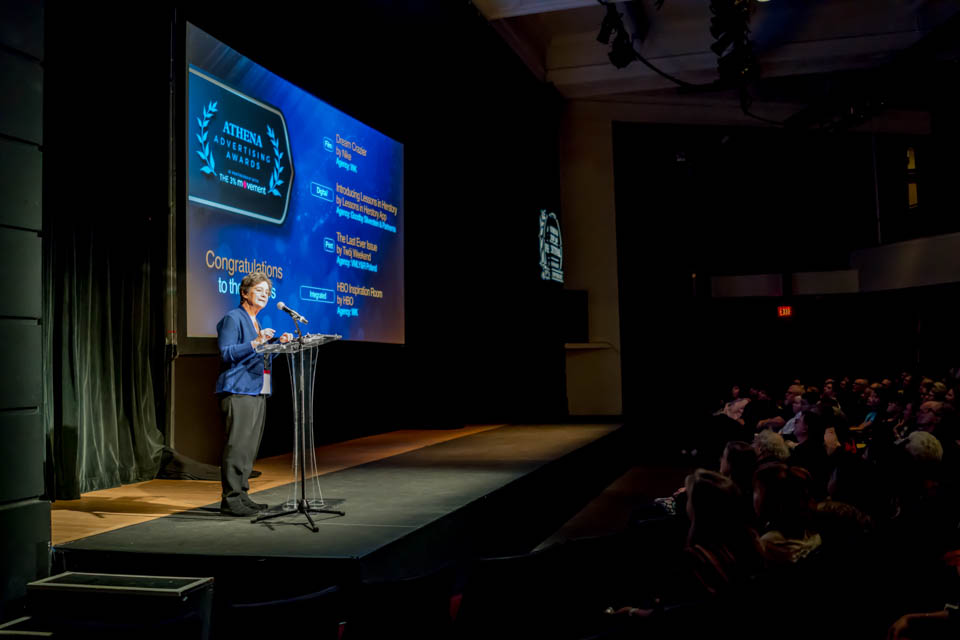 “I Am Woman” tells the story of musician Helen Reddy, a feminist icon of the 1970s, in the first screening of the 10th annual Athena Film Festival.

After a long day, Helen Reddy had just tucked her daughter into bed—a familiar, mundane task for the single mother and aspiring singer—when inspiration struck. She scrambled to her daughter’s desk, whipped out a notepad, and wrote without hesitation: “I am strong. I am invincible.” These words of affirmation would later become the lyrics of her hit song “I Am Woman,” which became an unofficial anthem of the women’s rights movement of the 1970s.

Director Unjoo Moon’s biopic of the same name depicted this scene with intimate intensity, setting the tone for this year’s Athena Film Festival.

“I Am Woman” premiered in New York on Thursday at the Miller Theatre as the opening screening of Barnard’s 10th annual Athena Film Festival. The film, directed by Moon and written by Emma Jenson, traces the monumental career of singer Helen Reddy, played by Tilda Cobham-Hervey.

In line with Barnard’s mission of empowering and uplifting young female leaders, the Athena Film Festival highlights stories centered around and told by trailblazing women. After last night’s President’s Reception, at which Greta Gerwig, BC ’06, presented this year’s Athena Award to Booksmart actress Beanie Feldstein, “I Am Woman” kicked off the four-day film festival. The weekend will feature films, documentaries, and shorts, in addition to a number of panels, readings, and workshops.

The biopic follows Reddy from 1966 to 1989, a period during which she rose from an aspiring singer living in a hotel with her three-year-old daughter to becoming a Grammy-winning voice of a movement.

Throughout these decades of her career, Reddy faced persistent gender-based discrimination within the industry and struggled to balance work with an increasingly tenuous family situation.

From the start of her career, Reddy dealt with men in the industry denying her equal pay and judging her for being a single mom. In one case, a producer told her, "I can't do anything with a female singer."

Alongside her husband and manager Jeff Wald (Evan Peters), and friend and influential rock critic Lillian Roxon (Danielle Macdonald), Reddy managed to surmount the industry’s gendered expectations of her. Rather than convincing producers that “I Am Woman” would be a hit, she convinced audiences. Performing the song for increasingly large crowds of women with whom the lyrics deeply resonated, she gave industry stakeholders no choice but to play the song which women across the country demanded to hear.

Through background shots of news coverage over the years, the film presents Reddy’s story in tandem with that of the Equal Rights Amendment, which gathered mass support with the 1970s women’s movement, but ultimately failed to achieve ratification. Moon discovered deep parallels between the two stories during her extensive conversations with Reddy in preparation for the film.

Moon received the Athena Breakthrough Award this year, an award that is granted to a female-identifying filmmaker for her first or second film, and whose film has yet to be distributed throughout the United States.

She went on to recall women in her suburban community who connected with Reddy’s music, saying, “When her voice used to come on the radio … my mother and her friends would be in their Volvo station wagons and they’d wind down their windows, they’d let down their hair, [and put] their fists in the air.”

The anecdote provided a window not only into Moon’s inspiration for sharing Reddy’s story, but also into how generations of feminists have taken her lyrics to heart. After a performance of the song by Barnard’s a cappella group Bacchantae, an audience member who is the president of the Helen Reddy fan club, which was founded in 1976, shared his personal connection to Reddy and her narrative.

“When I first became aware of her in 1971 as a depressed, lonely, gay teenager in the early ’70s … I’d have to say [I was] suicidal, and I thought, ‘I have to tell somebody about what I’m going through,’” he said. “I thought … ‘I’ll just write to her and tell her.’ Well, she wrote back. And over the last 45 years, I have heard so many stories from people that have been touched by ‘I Am Woman’ and Helen’s music and her life.”

The powerful connection between the women’s movement and Reddy’s music is solidified in the film’s final scene, which depicts Reddy performing “I Am Woman” for a crowd of protesters at the National Mall in Washington, D.C. in 1989. With thousands of women singing “I am woman, hear me roar,” in unison, Reddy’s impact in galvanizing women to fight for equal rights is undeniable.