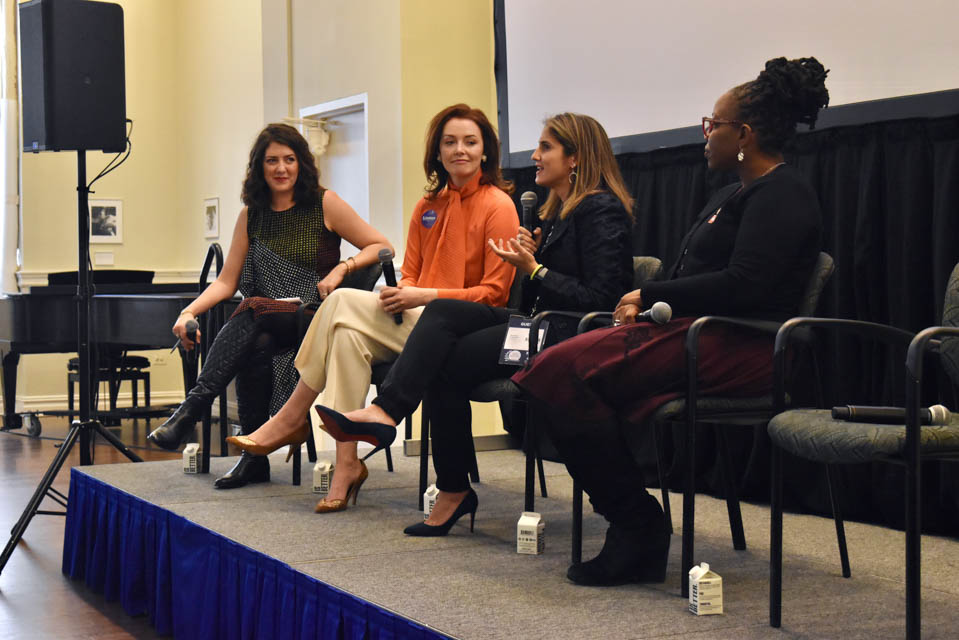 Through a series of screenings and panel discussions, this year's festival shined a spotlight on the lack of LGBTQ representation in the media, the dearth of female heroes and villains in popular culture, and the inspiring women who are running for office.

You can’t be what you can’t see, and the 10th Athena Film Festival took that mantra of representation to heart this year. Through a series of screenings and panel discussions, the festival shined a spotlight on the lack of LGBTQ representation in the media, the dearth of female heroes and villains in popular culture, and the inspiring women who are running for office and changing the male-dominated political landscape.

“The L Word” would not have decided to reignite the relationship between Bette and Tina—one that has inspired queer representation for years—if not for an online fandom demanding their reunion, according to Ilene Chaiken, creator of the groundbreaking queer television series.

Chaiken’s revealing interview was featured in the documentary “Queering the Script,” directed by award-winning filmmaker Gabrielle Zilkha and screened as part of the Athena Film Festival in the Julius S. Held Auditorium in Barnard Hall on Feb. 29.

The film explores the power of queer fandoms in shaping LGBTQ representation on TV and in film. In particular, it highlights the global queer community’s power on social media and online discussion forums to call out the erasure, stereotyping, and tokenizing of LGBTQ characters on screen.

“Queering the Script” also points out a frequent phenomenon in television in which queer characters are killed off at disproportionately high rates relative to heterosexual characters, a phenomenon that the fandom universe has termed “burying your gays.” The film highlights the death of openly queer character Lexa in the series “The 100” as a notable example.

Fans in the documentary explain that they mourn these deaths intensely because the LGBTQ characters in television and film are so scarce that losing a couple of characters each year means losing a sizable percentage of characters on screen who represent them and their stories.

Following the screening, an Athena staffer facilitated a Q&A with film editor Shelley Therrien and film subject Princess Weekes. Their discussion expanded beyond the scope of queer representation to intersectional issues of representation in media.

“Queer representation is okay, and great, and I’m a bisexual woman so I’m rooting for it, but it cannot be at the expense of ignoring the issues among the brown and black communities when it comes to representation,” Weekes said, responding to a student question about broader representation issues in TV and film.

The saint, the harlot, or the vampire

The Athena Film Festival held its second Women and Horror panel this Friday in Barnard Hall’s James Room. The panel was moderated by founder of “The Future is Female” Caryn Coleman and featured IFC Films publicist Kate McEdwards and award-winning writer and filmmaker Sydney Clara Brafman. Brafman is best known for her 2018 film “Extinct” and her 2019 short film “Squib.”

Women and Horror opened a conversation surrounding women as heroes and villains in the horror movie genre. This year’s perspective entailed both the duality and intersection of these two labels, as well as the extent to which this binary leaves space for other types of representation of women in horror films.

“A villain is really just a hero, but on the other side,” McEdwards said. “Anyone that is a hero for women can be a villain for men.”

McEdwards explained the categorization of female characters in horror as either the mother, the saint, the harlot, or the vampire figure. Mother figures in horror films referenced in the panel included “Poltergeist,” “Hereditary,” and the French film “Inside,” which all represent motherhood from an unconventional perspective. These mother figures show how women are represented as villains and victims at the same time, with all these characters coping with an isolated reality.

The panel also explored how the complexity of female characters in horror films reveals the fluidity between these labels. The conversation shifted to representation not only on screen but also behind the camera, discussing how most of the aforementioned horror films are directed by men. McEdwards further spoke on the importance of diversifying this medium by adding new perspectives of qualified people behind the scenes.

“Anyone can direct anything as long as they’re the right person for the job,” said McEdwards.

The women who lost their political elections and built a legacy

Directors Wendy Sachs and Hannah Rosenzweig, who also took part in the 2019 Athena Film Festival, were inspired by the record numbers of women running for office following the 2016 election, particularly in the 2018 midterms.

“I thought, ‘Wow, there is a film in here. This is not just this sort of random moment, there seems to be a real movement happening,’” Sachs said.

On Saturday, the Athena Film Festival hosted a panel discussing the impact of women running for office. The panel was moderated by Erin Vilardi, Founder and CEO of VoteRunLead, a campaign and leadership organization that trains women to run for office.

The panel examined the 2018 elections, a year that saw record numbers of women run for office. Throughout the panel, the invited speakers dug deep into the question of whether the election sparked a moment or a movement.

The event began with a first-time screening of clips from an upcoming documentary, “SURGE.” Directed by Sachs and Rosenzweig, “SURGE” covers many politicians but primarily focuses on three first-time female candidates running for Congress during their campaign and in the 2018 election: Jana Lynne Sanchez from Texas District 6; Lauren Underwood from Illinois District 14; and Liz Watson from Indiana District 9.

Despite the optimism heading into the elections, however, Underwood was the only candidate to claim victory. Sachs and Rosenzweig’s explained that their mission behind the film is not only to highlight some of the women that dedicated significant amounts of time to running but also to challenge the notion that a win or loss is the only outcome that matters.

“We really leaned into this idea of reframing this female notion of failure and losing,” Sachs said. “You need to go out there, you need to try, and you may have to lose first before you win.”

While searching for the candidates featured in “SURGE,” Sachs and Rosenzweig said that they were looking for first-time candidates from deep red districts that would continue their campaign up until the general election: a diverse group that would bring unique and unheard sides of the story to light.

“Liz talks about being the mom of young kids,” Rosenzweig said. “Lauren is so young and she talks a lot about being a young candidate. Jana’s like our true search candidate because she had never really been involved with politics before, but Lauren and Liz have.”

The directors revealed that both Watson and Sanchez plan on running for office in the future, though Watson is waiting to run again until her kids are older, according to Rosenzweig, who explained that there exists a lack of support for female candidates’ family lives.

Velazquez spoke about her experience running for City Council against Mark Gjonaj, an assembly member who defeated her by only a couple hundred votes. Velazquez noted the struggle of running “against the machine” as well as the importance of finding a community that continues to empower her.

Boylan, a candidate running in a district that hasn’t been represented by a woman in over 50 years, said she was influenced to run by the lack of female representation and the resulting female suffering. Ampry-Samuel emphasized her determination to “show up [and] show out,” despite being told she didn’t have time to run for speaker due to the large number of problems in her district. Similarly, Rosenthal is determined to “make the government work better for New Yorkers.”

By the end of the panel, audience members and panelists departed with a deeper understanding of the impact of women stepping up and holding the government accountable, by running for office.

“My mother, as a sixteen year old single mother, told me never to expect that anyone—no less a man—was coming to save me,” Boylan said. “I think we have to save ourselves. Together.”