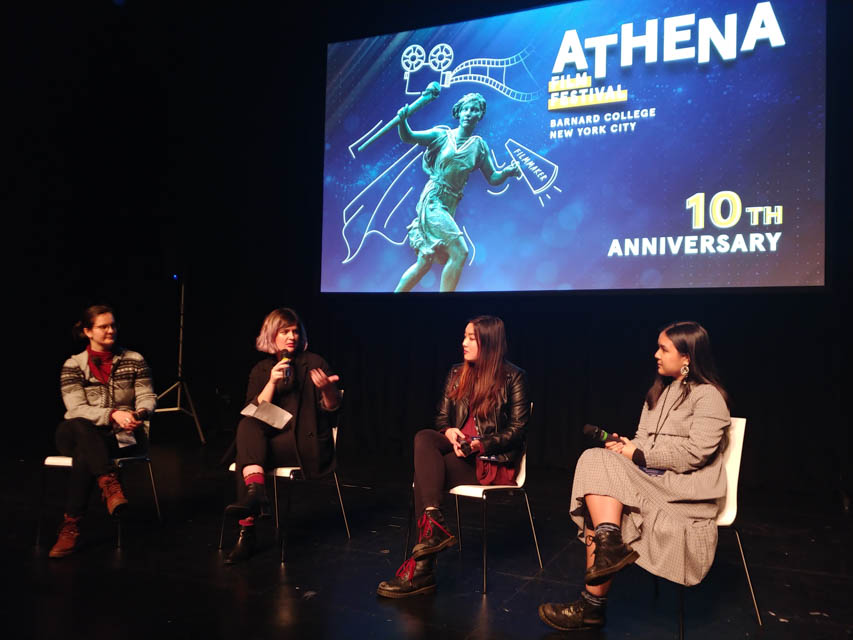 Three student filmmakers were selected to participate in the Media Center Emerging Filmmaker Mentorship Program, which provides creative support and funding to undergraduate Barnard filmmakers. This year marks one of the first times that the Athena Film Festival has featured student filmmakers’ work.

The Athena Film Festival, in partnership with the Sloate Media Center at Barnard College, screened three short films written and directed by current and former Barnard students as part of the “Student Short Film Showcase.” Held at the Glicker-Milstein Black Box Theatre on Feb. 28 student filmmakers Hannah Ahn, BC ’19, Emma Noelle Buhain, BC ’20, and Iris Sang, BC ’21, had their films screened for a full audience. Ahn and Buhain also joined postbaccalaureate fellows Ruby Mastrodimos and Kory Louko on a panel following the screening.

Now in its tenth year, the Athena Film Festival at Barnard tells the stories of fearless women who are leaders both in and out of the film industry.

The three student filmmakers were selected to participate in the Media Center Emerging Filmmaker Mentorship Program, a semester-long program that provides creative support and funding to undergraduate Barnard filmmakers, which enables them to produce their own short films. The program was launched in January 2019, marking this festival as one of the first times that the Athena Film Festival has featured student filmmakers’ work.

“Combining Athena Film Festival with our program’s mission is about letting all people tell the stories that they want to tell,” Sang said. “It’s about also giving minorities, or people who tell very personal or different stories, a chance to show their films.”

The event began with Ahn’s film “Poisonberries,” which was inspired by Ahn’s experiences in middle school. Ahn, who now lives in Los Angeles and hopes to become a television writer, said that the film was also inspired by her dog––who helped her navigate her anxiety and loneliness––and by an active shooter drill, during which she and her classmates hid behind instruments in her school’s band room.

The film explores the motifs of loss and grief when loved ones lose a child from gun violence. It follows a young girl of color who dislikes middle school and worries that her dog ate poisonous berries while on a walk. When her mother decides not to take the dog to the vet, the girl locks up the dog in its cage and goes to school, anxious about its health. Between scenes, ambulance sirens and policemen’s voices echo, sounds that highlight, as Ahn noted, the anxiety that many children face daily in school.

In one scene, the girl imagines standing by her dog’s casket at its funeral. Immediately after, the girl rushes to a computer in the library to research whether or not her dog will be fine, but the start of a lockdown drill forces her to crawl in between two bookshelves, fearing for her life.

After “Poisonberries,” Sang’s film “Qintong (Child Pianist)” was screened, exploring the relationship between an older man who works at a piano agency and a young boy who spends much of his time there. Sang is currently studying abroad at the University of Oxford, and has previously held internships with the Cannes Film Festival and the Berlin Film Festival.

“Qintong,” which was filmed in China, opens with the sound of piano music as the older man notes, “When you are playing music, you are telling a story.” He begins teaching the younger boy how to play piano, but the boy struggles to commit to learning due to the demanding schedule of his math competitions.

The boy and the man sit at the piano playing a duet, but the boy suddenly runs away. He later meets up with the man, confessing that he no longer wants to pursue piano. Soon after, the man says, “You should never be ashamed of doing the things you like,” and the two accept each other’s differences.

“The owner sees that his dream is rekindled on this boy, and this boy really enjoys the moment with him as well,” Sang said. “It’s a cross-generational moment.”

The next film, Buhain’s “Wedding Dance,” tells of a young bride’s experiences after speaking to a nun who gives her advice on how to treat her husband. Prior to making the film, Buhain traveled to the Philippines and went to a convent with her mother, where she met a nun and recorded her advice about marriage.

Her experimental film centers on a bride dancing with a mannequin while the nun’s advice is read in Tagalog. The nun says that a wife should not be annoyed when her husband comes home late, but should rather offer him food. She believes that a wife should fix her family’s problems herself since husbands are often less knowledgeable on how to solve them. The nun ends her narration by noting that a wife’s God-given mission is to change her husband for the better.

“I had never seen anything like [this film] before. I didn’t know how it would turn out, and I felt unsure about doing this project that would involve really strange imagery, vaguely demonic themes,” Buhain said.

Ahn and Buhain both commented on how student filmmakers often struggle to produce films due to monetary restrictions and a fear of the unknown within the industry. Buhain noted how female filmmakers of color often find it difficult to believe that their ideas will be taken seriously.

However, the Emerging Filmmaker Mentorship Program’s short film screenings revealed how, in an age when 43 of the top 100 grossing films of 2019 were either female-led or featured a female lead, the future is bright for young filmmakers.

“Materially, [the program] helps so much because they give you access to their equipment; they give you funding so that you can create the short films, and they have mentors that they paired up with us,” Ahn said. “It demystifies the whole process for someone who hasn't been doing film or hasn't ever really seen it as something that you can just get up and do yourself.”