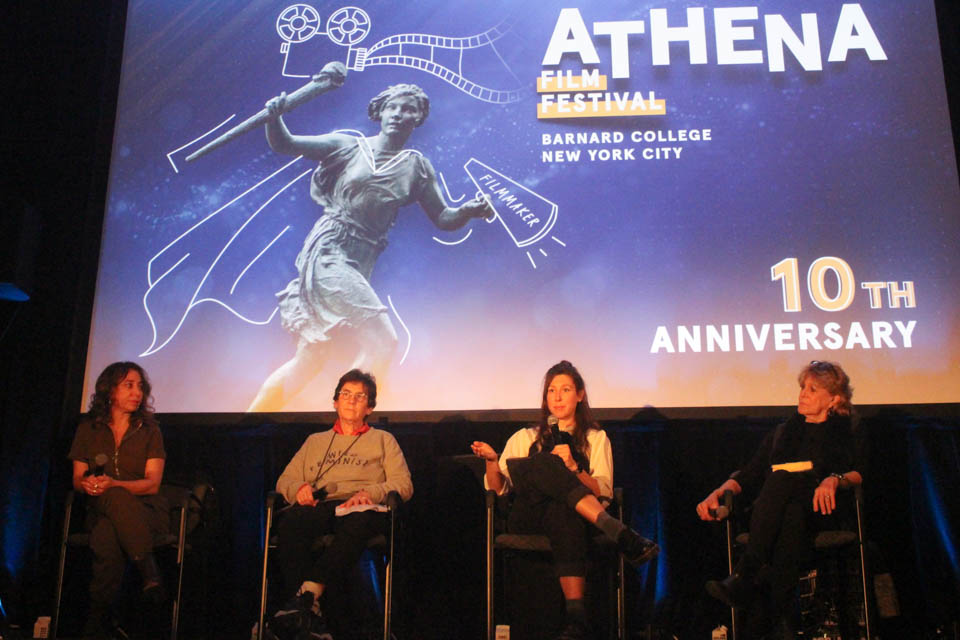 The documentary screening was directly followed by a panel on the importance of women’s accessibility to STEM fields.

Besides the general theme of space travel, one may be hard-pressed to say what, if anything, Star Trek and NASA have in common. However, by the close of the Athena Film Festival, the connection between the two was clear: Uhura—freedom.

As the 10th annual Athena Film Festival drew to a close on March 1, one of the final films screened was “Woman in Motion,” a documentary that explores the intersection of the arts and science, technology, engineering, and mathematics through the captivating story of Nichelle Nichols, a Hollywood actress-turned NASA recruit.

The documentary compiles footage and interviews from Nichols’ career to explore her transition from a pop culture icon to the recipient of NASA’s Public Service Award, which lauded her efforts to make the study of space more accessible for women and minorities.

The first half of “Woman in Motion” is largely centered around Nichols’ breakthrough role as Uhura in Gene Roddenberry’s “Star Trek,” which received critical acclaim for its ability to create a fictionalized universe that transcended the boundaries of race and gender. While Uhura’s presence aboard the Starship Enterprise captivated a generation, it was Nichols herself who imbued the character with the hope and daring that elevated them both to cult icon status.

The second half of the film follows Nichols’ ambitious efforts in the field of public service, where she used her celebrity status to inspire a new generation of NASA astronauts. After noticing a lack of diversity at various science convention panels, she decided to use her status to publish letters in Ebony Magazine, directly calling on NASA to address the issue.

After touring NASA headquarters and seeing the lack of diversity at these conventions, Nichols realized that she would need to take matters into her own hands. This led her to embark on a massive four month joint campaign with NASA to travel across the country and recruit a new and diverse class of astronauts. By the end of her campaign, Nichols had recruited applications from 8,000 civilians across the nation. Many of these applications were from women and people of color. Her campaign was so successful that NASA needed to increase its astronaut class size for the year from 25 to 35.

The screening was directly followed by a panel on the importance of accessibility to STEM fields for women, a subject closely linked to Nichols’ own life work. Panelists included Janna Levin, a Barnard professor of astronomy and physics; Ruth Angus, an assistant curator and professor of astrophysics at the American Museum of Natural History; and Lynn Sherr, an award-winning broadcast journalist and author, best known for her reporting on the beginnings of the NASA space program and her novel on Sally Ride, the first woman in space and one of Nichols’ recruitees. The panel was moderated by Kathryn Kolbert.

The panelists initially reflected on their unique paths into the world of astronomy and astrophysics, highlighting the importance of representation and accessibility to further encourage female involvement. Then, Kolbert turned the conversation towards ways of encouraging young women who are interested in STEM careers. For Levin, however, there is no single way of doing so.

“You can find these very human stories, and this very moving way to relate to [the material],” she said. “I think you just have to bring some integrity and some sincerity to the project.”

These ideas embody the larger purpose of “Woman in Motion”: to cement the legacy of Nichols while using her work to provide representation and stories that will influence the next generation of women and minorities in STEM.

On a broader scale, Angus encourages people to look at stories like Nichols’ for inspiration but rejects the idea of holding all women to the standard of an icon or spokesperson as Nichols was. According to her, women who are passionate about STEM should be able to pursue careers in those fields without pressure to represent women as a cohort. For Angus, increasing the number of women in STEM fields by “significant numbers” is paramount.

“If you are the only female astronomer in your department, your male colleagues will expect you to sit on the committee for diversity, equity, and inclusion. They’ll expect you to organize [these] conferences for women in astronomy,” she said. “And that cannot happen because that will then disadvantage that person.”

Later in the panel, Levin commented on the nature of her role as a STEM educator at Barnard. From her perspective, the state of scientific fields today makes her feel like a revolutionary.

“I think the most radical activism I participate in is teaching physics at Barnard,” she said.

Several films like “Woman in Motion” that were featured at the Athena Film Festival this past weekend embrace the notion of diversifying specific subjects and fields, aiming to promote accessibility to those who once were excluded from the narrative. Viewing space and STEM through the lens of film and entertainment is key to ensuring that groups welcome underrepresented minorities.

“Woman in Motion” demonstrates the power of storytelling by shaping the narrative of who is and is not allowed access to these traditionally, male-dominated fields of study. While Uhura’s story tells the world that space is anybody’s domain, Nichols reinforces this statement by spreading it through recruitment. Now, over 30 years later, the freedom she embodied is inspiring a new generation of scientists to keep their eyes on the stars.