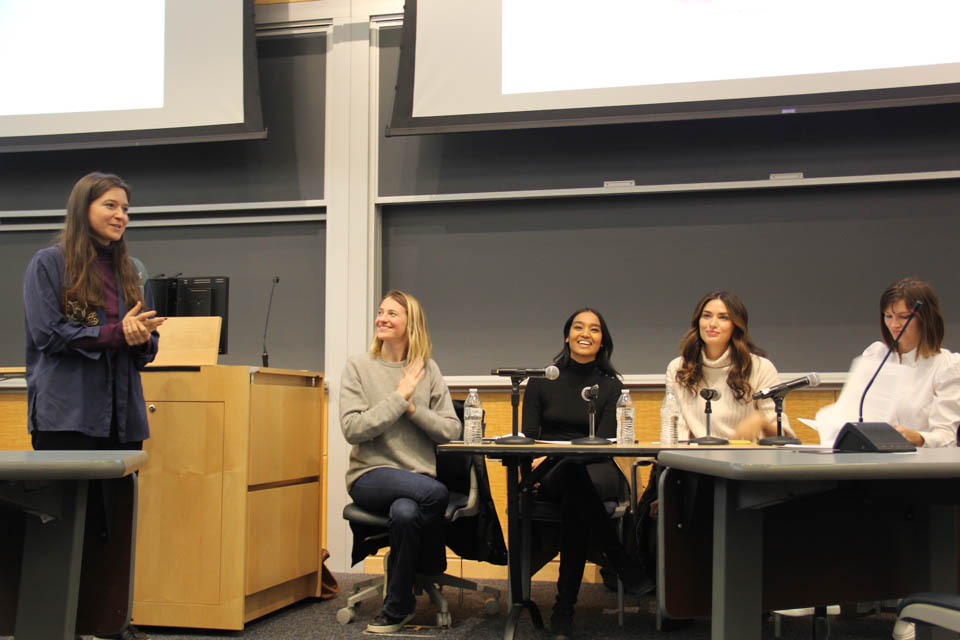 The panel shed light on legislative loopholes and rights abuses in the fashion industry. From crowding overseas apartments to leveraging visa sponsorship, models revealed the shocking malpractices of their agencies.

Modelling agencies scatter overcrowded and overpriced “model apartments” around the world for the so-called “convenience” of clients working abroad. One such apartment in New Jersey featured 10 bunk beds and one bathroom at $1,800 per month—with the luxury amenities of theft and a constant influx of strangers.

“They know that we don’t have the money to stay in these cities,” model Shivani Persad recalled. “We are held in debt to our agencies.”

On Monday afternoon, Columbia University Fashion Society and the Middle Eastern Law Students Association co-hosted a panel at the Law School on the protection of models’ rights called “The Faces of Fashion: a Discussion around Models’ Rights.” The four panelists included Founder and Executive Director of the Model Alliance Sara Ziff, GS ’11, alongside Shivani Persad, Ava Smith, and Nathalia Novaes, who are Leadership Council members of the Alliance.

Founded in February 2012, Model Alliance is a nonprofit organization which has successfully lobbied for legal protections like the Child Model Act in the state of New York. Beyond advocating for legislation, the Model Alliance has launched the RESPECT Program—a potential plan of action for modeling agencies, as well as other companies within the fashion industry. The proposed measures include increased transparency around models’ rights and the formation of an independent system for filing harassment complaints.

“No company will join the RESPECT Program out of the goodness of their heart,” Ziff said. Instead, she pointed towards the real incentive for companies to join: self-interest. She went on to state motivations largely came from preventing #MeToo accusations because of the financial cost associated with them, rather than the human one.

For Novaes, modelling took a severe physical toll. She described widespread eating disorders as symptomatic of a working environment where employees don’t feel that they have ownership over their bodies. To make matters worse, some modelling agencies used their positions as visa sponsors to coerce young women into weight loss.

“We are dealing with a human rights issue here,” Novaes said.

Persad also went on to describe the emotional toll of deeply rooted racism and colorism in the fashion industry. She recounted photographers’ preference for “Caucasian features,” as well as her own marketability as a model for meeting an “ethnic quota.” She stated that unregulated working conditions only exacerbate race and gender-based harassment.

“Yes, our jobs are based on how we look,” Persad said. “But at what point does that become discriminatory?”

According to Smith, a kind of “vacuum” exists around the legal protections available to models. There is no consensus concerning whether they should be classified as independent contractors or employees, which has also been a major obstacle in unionizing. This lack of a “clear-cut case law” is part of the legislative loophole responsible for continued workers’ rights abuse. It is with the RESPECT Program that the panelists hope to finally fill this gap.

“It’s important to have the public recognize that [models] are actually very vulnerable,” Smith said. “Hopefully as public perception changes, there will be more pressure on companies to start to address this fact.”

However, models are only the visible faces of exploitation within the fashion industry. The panel came to a close around the discussion of solidarity in the face of industry-wide abuse.

“It’s built on the backs of women and girls—but not just the ones you see,” Persad said. In other words, the fight for legislative protections must also include those outside the public view, such as garment workers.

In closing, Smith stressed that cooperation is necessary across all industry levels in order to affect change.

“We’ve found a lot of success in teaming up with organizations along the supply chain. Because, again, fashion doesn’t just start on pages of magazines. It starts in many of these factories—we share common issues from the factory floor to the runway.”