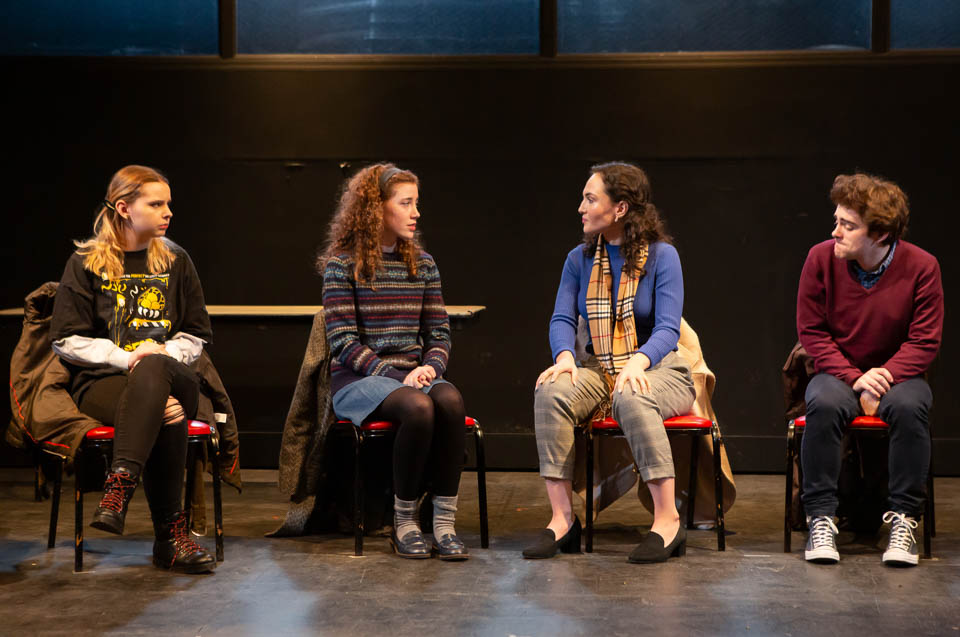 Moments that garnered tangible feeling were those that drew on the actors' tools. Yet the majority of "Town Hall" seemed insubstantial, grasping at the meaningful and the tangible, but landing within the realm of the ambiguous and the trite.

Eight mysterious figures, a semicircle of red chairs, and a hollow, gray stage––together, a town hall meeting at the edge of a world in crisis. Immediately, these figures warn the audience: “This is serious.” However, they go on: “This is not important,” “[This is] just a play.”

The Barnard theatre department presented “Town Hall” from March 5 to 7 in the Minor Latham Playhouse. Written by Caridad Svich, the 2012 winner of the OBIE Award for Lifetime Achievement in theater, and directed by Rachel Gita Karp, CC ’10, this production was the first fully realized performance of Svich’s play. However, in attempting to incorporate every hot-button topic of the moment—the economy, feminist rage, war, climate change, terrorism—the majority of “Town Hall” seemed insubstantial, grasping at the meaningful and the tangible, but landing within the realm of the ambiguous and the trite.

In what Svich describes as a “play-conversation,” several unnamed figures—played by Claire Fry, CC ’20, Devin Hammond, BC ’20, and Jordan Mahr, CC ’20, in their senior thesis performances alongside Joel Meyers, CC ’21, Chloë Roe, BC ’22, Zadokite Wood, CC ’23, Adam He, CC ’20, and Maya Weed, CC ’22—populate an apparently apocalyptic world, perhaps our own. They repeatedly gathered for a town hall meeting; with each assembly, the leader-figure A, played by Fry, welcomed the unnerved, despondent crowd, asking if everyone was okay.

Characters told stories of the past when things were seemingly better: of mysterious animal encounters, losing one’s religion, of Christmas sweets, or marzipan pigs. These more grounded scenes were interspersed with moments of inquiry posed toward the audience, asking watchers to recall memories of nature, contentment, and fulfillment.

Much of the story was elliptical––another day, another town hall meeting, with Fry greeting the gatherers time and time again. Often, spaces of silence and questioning were heavy; perhaps the audience was meant to fill that space, as Svich’s characterization of the work as a “play-conversation” implied. Audience members were seemingly also members of these town hall gatherings; the characters sat in a semicircle of chairs onstage that seemed to be inviting completion by the audience. But apart from scattered greetings, they watched in tentative, observant silence.

By nature of the eight characters being nameless—each referred to in the program by a single letter—their stories, too, seemed ungrounded. The language of characters themselves seemed hollow—poetic, perhaps, but insubstantial. Although the cast of clearly talented actors made the most of the provided text, the ambiguity of their lines gave them no space to thrive, instead floating in the unfocused-ness of it all.

Moments that garnered tangible feeling were those that drew on these actors’ tools most significantly. Fry gave an impassioned, mournful soliloquy listing names of places that had been affected by violence, from San Bernardino to Paris to Boston. Wood was captivating when questioning the necessity of the university experience. Hammond enthrallingly contemplated her faith, and Meyers provided much-needed moments of comic respite.

Amid the repetitive story, one yearned for a pivotal moment—one where the peripheral horrors of the exterior world started to creep inside—to infiltrate the town hall meetings. Instead, “Town Hall” was accentuated with moments of song that were fervent, yet somewhat odd. After a moment of heavy despondency, the cast slowly broke into The Electric Light Orchestra’s “Mr. Blue Sky”—the chorus, an extremely on-the-nose metaphor for the climate crisis—and sang it gaily. Later, a more austere moment of song repeated the phrase “There is a war.” While it brimmed with harmony and feeling, one couldn’t help feeling like it was out of place.

Design elements contributed by visiting theater professionals, including scenic design by Selby Souza, costume by Beatrice Vena, Lighting by Dallas Estes, and sound by Broken Chord, were habitually superb, creating a disquieting aura that permeated the space. Glowing tinkles of bells accentuated different figures as they motioned to speak, paired with the orange gleam of lights that illuminated and united the audience and the stage.

Throughout the performance, small but effective gradual changes created a dynamic visual landscape. A large, windowed wall upstage crept further forward with each meeting. Cast members shed layers of jackets, scarves, and sweaters as the outside temperature seemingly erratically shifted.

Uncomfortably open-ended, “Town Hall” seemed to ache for more substantial grounding, either to cement itself firmly as an interactive play or to delve deeper into the issues that it only touches upon. Although the audience itself was illuminated, this illumination was only by the stage lights and not by the play itself.