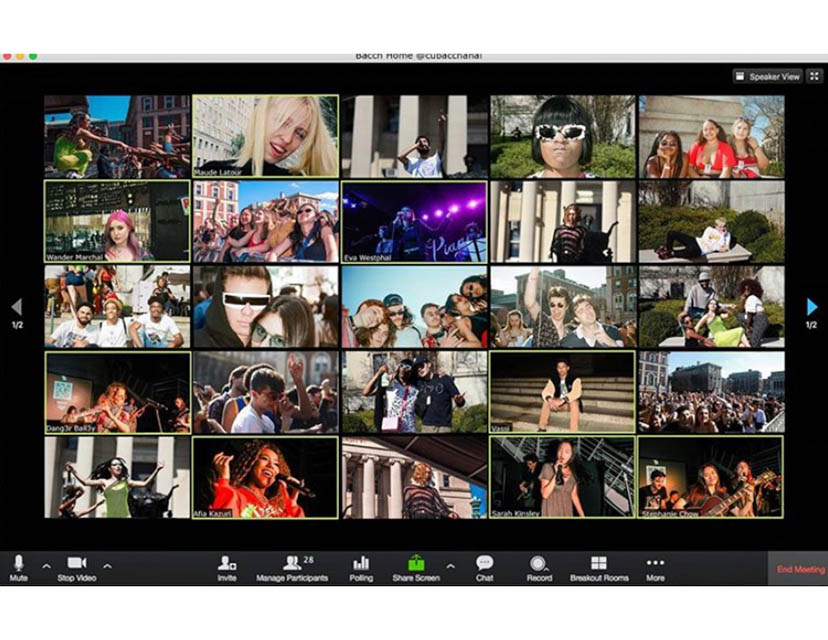 The Bacchanal Committee organized a six-hour online festival which was streamed on Instagram Live on the same day the concert was scheduled to take place.

Although the COVID-19 outbreak has forced the cancellation of annually-anticipated events across campus, including the springtime concert Bacchanal, both the Bacchanal committee and the do it yourself concert-throwers Hi Fi Snock Uptown (now playfully rebranding themselves as Wi-Fi Snock Uptown) insisted that the show must go on—virtually, of course.

In a similar move, the Bacchanal committee took to Instagram to announce “Bacch Home,” a virtual festival to keep the Columbia tradition alive. The committee organized a six-hour online festival that was live-streamed on the same day the concert was scheduled to take place. According to Bacchanal press chair Pedro Damasceno, CC ‘22, the virtual show came together just a week before April 4, the original concert date.

“We were just seeing this influx of really incredible performances by artists across the world [on Instagram]. We thought It would be a shame if we didn’t give something to students on Bacchanal, at least some way of feeling like you’re in a community of some sort,” Damasceno said.

Though the livestream acted as a replacement for the canceled show at Terminal 5, Damasceno indicated that rearrangements of this year’s original concert may currently be in the works. At the time of publication, none of the committee’s contracts with 100 Gecs, Gucci Mane, or Terminal 5 have been voided.

In the absence of a central venue, the student acts made creative use of their own spaces to set the stage for viewers at home. The musicians welcomed those watching into their childhood bedrooms, their living rooms, and even their cars, creating a unique and personal concert experience.

The comment section then became the communal venue. Each concert averaged between 40 and 50 viewers per performance, with many viewers actively engaging with the performers. During the Snock concert, as singer-songwriter Jane Watson belted out the chorus lyric, “What did I do to deserve you?” a commenter quickly fired off, “You deserve EVERYTHING Jane.”

More than once throughout her set, Watson broke into laughter mid-song, waving to the commenters she saw responding to her music in real-time via Instagram.

“The joy in my heart right now has not been felt at this level in WEEKS,” wrote an audience member.

Marchal—who won this year’s Battle of the Bands and the opportunity to open for Gucci Mane at the canceled Bacchanal—performed both at the Snock show and at Bacch Home and noted the unexpected level of audience engagement during her first-ever Instagram Live shows.

“I was really hesitant about doing Instagram Live shows because so much of why I perform is to be with the audience,” Marchal said. “[But during the Instagram Live shows] I still felt a level of engagement from people. It felt much more community-based than I thought it would.”

While performing her final song “I Don’t Want You Anymore,” which she playfully dedicated to the novel coronavirus itself, she invited both her mother and all livestream viewers to sing along with her.

These at-home concerts also allowed artists to give their audiences an inside look at their creative process. Canning, for one, showed viewers the logic file he has been using to produce his upcoming singles during his Snock performance. And during her Bacch Home set, singer-guitarist Stephanie Chow, CC ’23, created loops live for her enraptured audience as she covered songs from Bacchanal headliner 100 Gecs’ “Money Machine” to Solange’s “Cranes in the Sky.”

Artists who would normally play in groups found themselves suddenly in the solo spotlight. In lieu of a band, Elizabeth Bailey, BC ’22, who uses the stage name Dang3r Bail3y, played four instruments simultaneously for her Bacch Home set. Setting a tambourine by her foot, a triangle by the headstock of her guitar and a harmonica by her mouth, Bailey’s ingenuity allowed her to capture the upbeat and vibrant energy of many of her songs as a one-person band.

For other solo artists like Anderson Peguero II, CC ’19, known musically as DJ 999, the fully digital platform proved to be an opportunity to play with different modes of expression. During his performance, rather than focus the webcam on himself, DJ 999 offered up a video mosaic of visuals that complemented the music he spun.

“All of this goes back to what Bacchanal is and what we’re trying to hammer down on,” Damasceno said. “Being a platform for music in many different ways. An event like this, where we can get intimate, is really at the core of that.”

For Bacch Home, the success of the virtual event on a familiar platform may provide opportunities for future programming.

“The way that it worked out so well, we’re really considering continuing this regularly as a performance series to complement the series we have throughout the year,” Damasceno added.