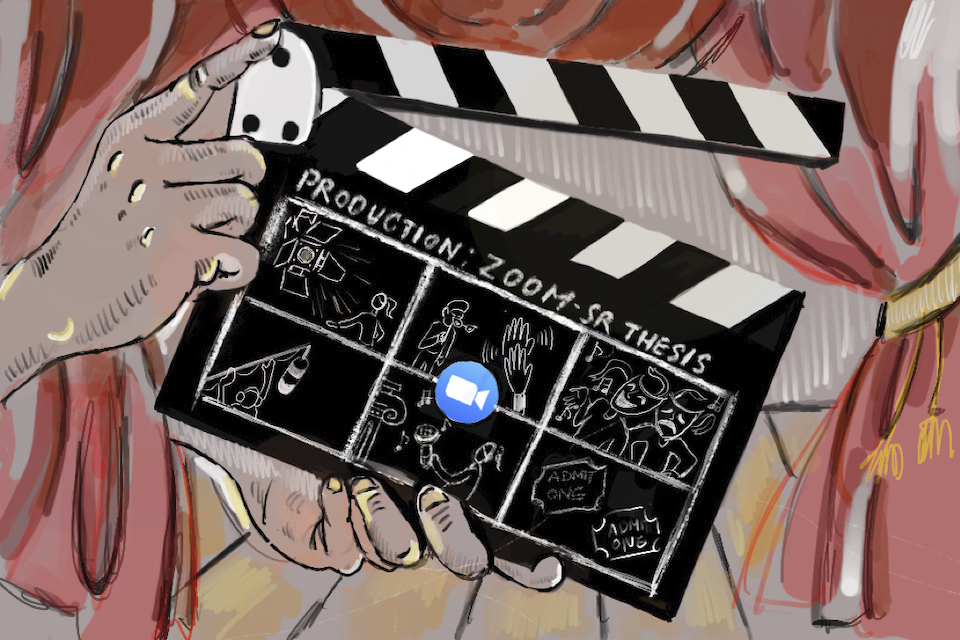 The theater department is producing three student directors’ productions online and livestreaming them from across the globe.

As an art form, theater is defined by hands-on collaboration, the thrill of live performance, and the real-time connections that audiences forge with the actors and the story onstage. None of those defining elements of theater seem feasible in the age of social distancing. Still, Columbia and Barnard’s theater department faculty never considered canceling the senior thesis festival for directing students.

"We pretty much unanimously said, ‘We’re not going to throw in the towel like that,’” production manager Mike Banta said.

Instead, the department is producing the three student directors’ productions online and livestreaming them from across the globe. Currently, students and faculty are exploring various livestreaming platforms that can meet the directors’ creative needs, which include the ability to split screens and play music in the background of the performance. Lightstream, vMix, and Wirecast are a few options on the table.

The main challenges that the students and faculty foresee are technical: Banta remarked on the possibility of mailing Internet cables to students to alleviate bandwidth concerns. But technical challenges necessarily become artistic challenges, and the student directors and design teams are rethinking their roles and reinterpreting their plays to reflect the current circumstances and adapt to the online format.

When Margot Gage, BC ’20, chose to direct “The Danube” by María Irene Fornés for her senior thesis over a year ago, she never could have guessed that her world would uncannily echo the world of the play by the time the show opened. The play is a love story set in a world that starts to crumble as the characters become sick with an unnamed illness. Their feelings of disconnect with each other are particularly resonant in a time of social distancing and virtual theater-making.

“The show feels very relevant in eerie ways. There are moments when, as this toxicity in the characters’ world starts to grow and they become ill, they talk about feeling like they’re in the same place but never at the same time. I feel like that’s very appropriate to a virtual production,” Gage said.

“The Danube” is originally set in 1938 and the characters, Paul and Eve, speak using the vocabulary of Hungarian-to-English language learning tapes. While remaining loyal to the text, Gage and her team are leaning into the play’s resonance and making the most of the online platform by shifting the love story into the present day, complete with modern technology.

“We’re reimagining it as Paul taking a language course online and falling in love with the person onscreen, so the play is now set in a time that has laptops and webcams,” Gage said.

In her production of “Disco Pigs” by Enda Walsh, director Maggie Vlietstra, BC ’20, is also taking advantage of the online format to explore the play’s themes of love, self-discovery, and interpersonal relationships in the digital age.

“[The play is] very much focused on youth and the experience of coming of age and figuring out how you want to be in the world around you,” Vlietstra said. “So much of how our generation is growing up is figuring out how we live in relation to the Internet, [and now] we are trying to figure out what our lives are looking like in the midst of this transition from being together in person to being together in a digital capacity.”

Of course, social conventions are different for online interactions than they are for in-person connections. For director Haoqi Xia, CC ’20, the idea of virtual relationships is key to reimagining his production of Gao Xingjian’s “The Other Shore.” Describing the play as abstract and avant-garde, Xia noted that the play’s openness meant that he could take the text “in a million different directions.”

“We act differently online than we act in real time and real space. I’m taking into consideration those online conventions. For instance, in our play, it has a lot of profanity, and I’m thinking, ‘How can we relate that to cyberbullying?’” Xia said.

Without access to a costume shop, stage manager’s booth, lighting and sound systems, and set-building materials, student designers and crew members are capitalizing on the digital format to bring their visions to life.

“All design has some sort of limits, and the designer’s job is just to play with these limits. I wouldn’t say in a traditional theater there’s no limit; we’re also playing with a limited budget and limited resources [in that setting],” Amy Tsai, CC ’21, and set designer for “The Other Shore,” said.

“The Other Shore” involves audience interaction, and Tsai said that the online format opens up new interactive possibilities, such as using the chat function on the livestream to communicate with viewers. Vlietstra and her sound designer, Emma Schechter, SEAS ’20, are looking to pre-record videos to insert into the livestream of “Disco Pigs,” an idea which became more feasible with the move to a digital setting. For “The Danube,” which involves puppetry, Gage is excited to explore livestreaming shadow puppetry in lieu of the originally planned rod puppets.

While the online format opens up many design possibilities, it demands that designers redefine their roles and that actors become much more involved in the design process. Set designers, for instance, will scout locations in actors’ homes. Costume designers will virtually visit actors’ closets to choose pieces to wear. Autum Casey, who teaches lighting design at Barnard, emphasized that there are several options, from low-tech gels for webcams to virtual light lab software to scouting light sources in actors’ homes, for lighting designers to realize their visions from afar.

Beyond location scouting in the actors’ homes, set designers can design virtual spaces where the plays will take place. For “The Other Shore,” Tsai is playing with the livestream software’s built-in functions, including configurations of multiple video feeds and a Photoshop-like function that she can use to incorporate text, images, and slideshows into the performance.

As for stage managers, Banta said they might try their hand at a different medium: television.

“The stage managers may end up functioning as a director in a TV studio, where they're controlling the camera cuts in the livestream,” Banta said.

In the absence of a backstage area, faculty had to rethink what to do with the students who signed up to fulfill a one- to two-credit stage crew requirement. Banta and Sandra Goldmark, who advises the design students, saw an opportunity to develop a course to teach these students how to use digital tools for theater, including Photoshop, Excel, and QLab, along with one non-digital skill: sewing.

“They’re going to get what they would have had backstage, which is a hands-on experience and some really practical skills,” Goldmark said. “I’m very happy that we're developing this as an experiment, and maybe it’ll be something that we continue when we return to whatever the new normal is.”

In the face of the technical, design, and performance challenges presented by the move to a livestream format, faculty and students emphasized their team members’ eagerness to collaborate—sometimes with people they have never met in person.

“It’s weird to meet people for the first time online and then delve into this extremely vulnerable text together, but everyone’s really open,” Talia Hankin, CC ’22, and an actor in “The Other Shore,” said.

Through their collaboration, faculty and students are creating a new way of producing live theater virtually. All three directors said that they will talk about this experience for the rest of their careers and many team members echoed the sentiment that these projects could help shape the future of theater even after social distancing guidelines are lifted.

“I believe our world will be back to normal at some point, but if this online streaming idea can go further, maybe theater can also become more accessible,” Tsai said.

While there may be rewards down the line, Shannon Sindelar, who advises the acting and directing students, remarked on the importance of using theater to reflect during these unprecedented times and forge connections with each other here and now.

“Art is effective when it serves as a mirror for ourselves: our vulnerabilities and flaws, but also our potential,” Sindelar said. “We find ourselves in a moment where maybe we’re feeling like our wings are clipped, but there are still many connections being made all around us.”