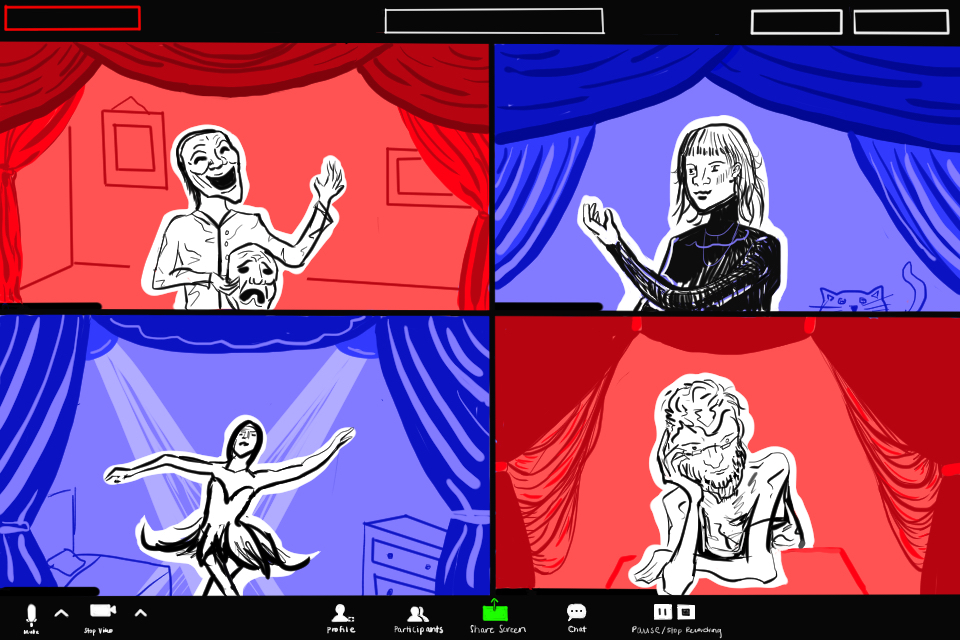 Acting faculty and students turn to film and radio techniques in the transition to online instruction.

When Columbia announced students’ departure from campus amid the COVID-19 pandemic in early March, Samuel Powell, CC ’20, was working with his classmates to create a new adaptation of Euripides’ “Medea” for the acting course entitled Performing Greek Tragedy on the Modern Stage. Prior to the evacuation of students, Powell’s group reimagined the play, setting it amid a quarantine in which characters communicated over video, incorporating the play’s themes of isolation and distance.

Since the move to online learning, theater students and faculty members have rethought not only how to interpret plays in the current context, but also the day-to-day logistics of theater classes, which rely almost entirely on in-person movement and interaction. In order to quickly adapt to the online format, many theater classes have resorted to virtual rehearsals, and even incorporated elements of different media, such as radio and film.

Gisela Cardenas, GSAS ’04, currently teaches Greek Tragedy alongside classics professor Helene Foley. The course aims to explore the dramaturgical elements of Greek tragedy through aspects of acting and performance. Since the transition to online instruction, Cardenas has tried to enhance the course by adapting scenes into short films and radio plays.

“I was trying to take this as an opportunity to see what other possibilities are out there that can enhance the work we do and also prepare the students [for] the new world,” Cardenas said. “I just decided to think of this not as a problem but as a provocation to find solutions.”

For Greek Tragedy student Sophia Bianchi, GS ’23, the class, syllabus-wise, continues to function mostly as planned, as students are still reading plays, analyzing texts, investigating modern translations, and transitioning to working through acting exercises. But the shift has given Bianchi opportunities to focus on more than just the words in her readings.

“We still have to be off-book, and we still have to have a lot of intention behind the lines,” Bianchi said. “We’re thinking more about tonality, and even when we’re not speaking, how our facial expressions are reacting to the other person."

Recently, the course has modified its previously planned scenes into radio plays, allowing students to focus on the single element of voice while honing their skills with a technical aspect of theater, according to Cardenas. Students are also still able to rehearse and present scenes from the course material, a central tenet of acting classes on campus. Bianchi explained that students rehearse on Zoom outside of class and then pre-record themselves acting out their scenes. They present their videos on Zoom through the screen share feature.

The incorporation of film techniques into theater courses is just one of the creative solutions faculty and students have proposed, creating a rare opportunity to explore acting for a different medium.

“The theater department doesn’t offer any film-acting classes, and to my knowledge, I don’t think the film department does either,” Joel Meyers, CC ’21, another student in the Greek Tragedy course said. “It’s kind of cool to be forced to explore that.”

Bianchi voiced similar interest for this unprecedented, pseudo-film format into which her class has been transformed.

“It makes you think more about what you have to do with your eyes,” Bianchi said. “As you just stand there, [being] an appendage in the nine-square chat when there’s other people having elaborate conversations, it becomes very obvious when your face falls flat."

Despite this cinematic silver lining, Bianchi noted the inherent discomfort of the new platform.

“Since we’re not with each other and not feeding off of each other’s body language and energy, I think that we’re just missing that essential, raw practice that needs to happen in order to refine your craft as best you can as a theater person,” Bianchi said.

These creative and logistical challenges are just as potent for instructors as they are for students. Tina Mitchell, an acting adjunct lecturer, has made use of Zoom’s breakout rooms to pair students together for rehearsal. However, she explained how it becomes challenging for students to present their work in “real-time” over a virtual platform.

“Theater depends on you being in a space together, sharing energy together, doing group work, and using the elements of the theater that are there,” Mitchell said. “If something goes wrong, you can normally figure it out, but just going into [an online] class, not knowing if something is going to work is very scary. You kind of have to have three backup plans.”

In acknowledgment of the challenges of attending college during a global pandemic, all Columbia classes have transitioned to pass/fail grading. For Meyers, the grading change has made the work feel more authentic, allowing students to prioritize personal growth over numerical evaluation.

"I wouldn’t say that the expectations are any less, but it takes the pressure off of the specificity of the grading scale,” Meyers said. “It lets you just focus on ‘Am I doing this? Am I taking notes? Am I getting the feedback right?’ versus ‘If I do this, is it an A-minus?’”

Though the transition to online instruction poses challenges and prompts creative solutions, Cardenas remains optimistic about the future of theater in whatever way it takes shape after the dust of the pandemic has settled.

“It’s never the same to see a recording of a performance than being in the room, but the fact that it’s not the same shouldn’t stop our capacity to create,” Cardenas said. “I don’t think this state is going to be forever, but it’s going to pose new questions about where we want to be in the future.”