Columbia student musicians play on during the pandemic

Columbia student musicians play on during the pandemic 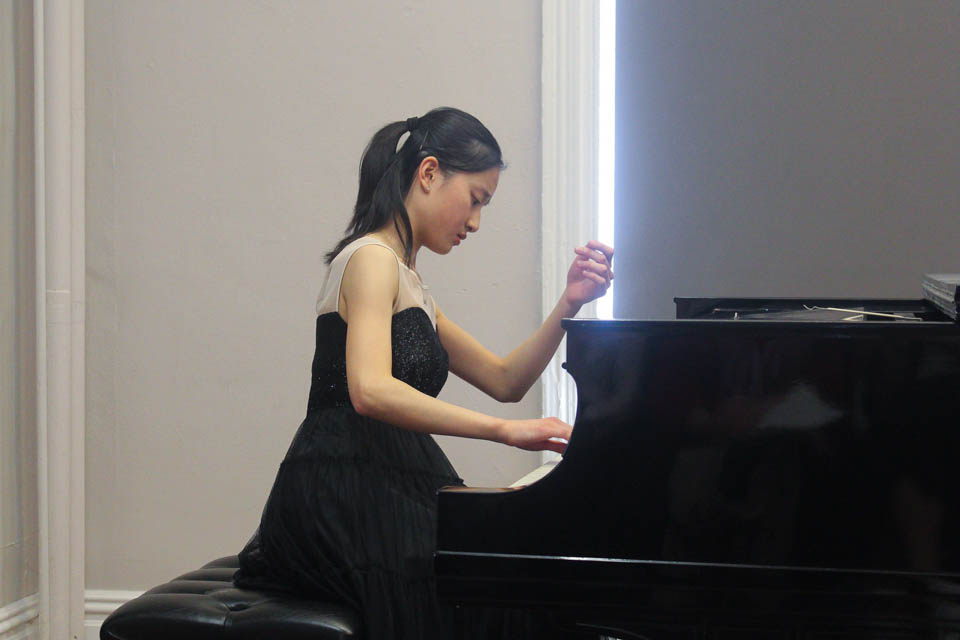 The coronavirus outbreak brought Columbia to a standstill. Now, music students and faculty are figuring out how to start playing again.

Maintaining any semblance of normalcy remains one of the biggest obstacles that the University faces following the move to remote instruction for the remainder of the semester. Although professors have had to adjust to teaching lessons over Zoom, the music department at Columbia has been especially challenged with finding creative ways to tailor the format of their classes and programs to help their students learn and perform amid a pandemic.

“Music is something that is most impactful when experienced together, in one room, as a community,” Magdalena Stern-Baczewska, director of the Music Performance Program and lecturer in the music department, said.

For professors, some of these new and creative ways to adapt to online learning include teaching individual performance lessons online, a practice some students are already used to.

“It’s definitely not the same, but I’ve taken lessons over Skype before, and you can still get a lot out of it. The major loss is not being able to play with your teacher or have your teacher see little nuances in your playing that don't really translate over a computer speaker or a pixelated screen,” Stephanie Chow, CC ’23, said.

Chow is majoring in philosophy and concentrating in jazz studies, a field of study which focuses on the cultural impact and history of jazz. The concentration also places her in the Music Performance Program, through which she receives around six individual bass guitar lessons each semester with the Columbia faculty.

But for students taking part in the rigorous Columbia-Juilliard Program, the switch to online learning complicates an already demanding schedule. As part of the program, a select number of musicians get the chance to work with world-renowned faculty at Juilliard, take lessons, and use studios at the school while simultaneously earning a Columbia degree. Like Columbia, Juilliard has moved all courses online. According to students in the program, there have been no program-wide changes to the Columbia-Juilliard Exchange curriculum despite the move to online coursework.

Furthermore, the jury process—Juilliard’s version of final exams—is being modified on a departmental basis. During a typical jury, a student will perform for around 10 or 12 faculty members from within their respective departments, who then evaluate their performance and determine whether or not the student is eligible to remain in the program, especially at the close of their second year of study.

According to Joe Block, CC ’21, a jazz pianist in the Columbia-Juilliard exchange program, some Juilliard professors, like his jazz professors, are exploring online mediums for the juries to be held, such as having students send in pre-recorded videos of themselves playing with a backing track. Columbia-Juilliard Exchange student Angela Yu, CC ’22, who studies in the classical piano department, has been given the option to either submit a video version of her jury performance by May or schedule a makeup jury next semester.

When asked whether she anticipated that the switch to online learning would hinder her ability to grow musically, Yu attested that while she anticipates that her technique and performance abilities will suffer, she can use the time to home in on other aspects of her musicality.

“To be honest, I wouldn’t see myself making huge progress [this semester] in terms of piano technique or performance. But I think during this time, it’s also a good way for me to improve in other ways. For example, I would like to read more composers to get to know more about the piece, because right now, I have more time to devote to other things rather than practice,” she said.

Yu intends to use the extra time on her hands to read up on Chopin, one of her favorite composers, and listen to live concerts to cultivate her musicality. She has also been taking advantage of the opportunity to explore other aspects of her musicianship, particularly improvisation, a skill that she never felt she had time to work on before, but now can freely experiment with in light of the mass exodus of students over the last few weeks. The Broadway practice rooms on campus—usually filled to the brim with students contributing to a collective cacophony of sound—are now strangely empty.

And while there has been much coordination for private lessons, what remains a challenge is coordinating for ensemble groups to perform together.

“The biggest obstacle is what to do with ensembles—just finding different ways to still engage with the practice of music without necessarily playing together. There are still ways to analyze it, listen to it, or learn about it that can still be social in nature without it actually being people just playing,” Chow said.

At a virtual luncheon hosted by the MPP on March 20, students and associates discussed various solutions to preserve ensemble work in an online setting. The proposed solutions range from watching and critiquing students’ pre-recorded performances together over Zoom, to holding discussion-based sessions during which student groups are asked to interpret the piece and think about its context.

The efforts made by the Music Performance Program ease student concerns about the future of the ensembles, primarily because of the inability to synchronize big bands and small ensembles over Zoom.

Student musicians have also found ways to adapt and preserve the collaborative aspect of their studies without departmental support. Although Chow is unable to have practice sessions with her Carman Hall floormates in person, she and other musicians have adapted by sending each other recordings and snippets of songs they’ve written back and forth. Some students on campus have also held Zoom recitals from the comfort of their homes, according to Stern-Baczewska.

In a recent rehearsal, Block found a way to collaborate musically online in real-time with his ensemble.

“The six guys in my ensemble, we just played individually and went around trading choruses. You kind of improvise and then you hand it off to the next person over one song. So we've found a way to make it work,” Block said.

Many of the events the MPP had planned—including its annual gala at Carnegie Hall and dozens of other concerts—have now been canceled given the circumstances of the COVID-19 pandemic. However, these student-led initiatives might inspire the MPP to hold virtual events in their place. Stern-Baczewska, for one, looks forward to a successful remainder of the semester.

“[The instructors’] level of alertness, the level of empathy and care for the students and their well-being, while maintaining the high Columbia standard, has been something that will inspire me, not just for this period but for much longer,” she said.