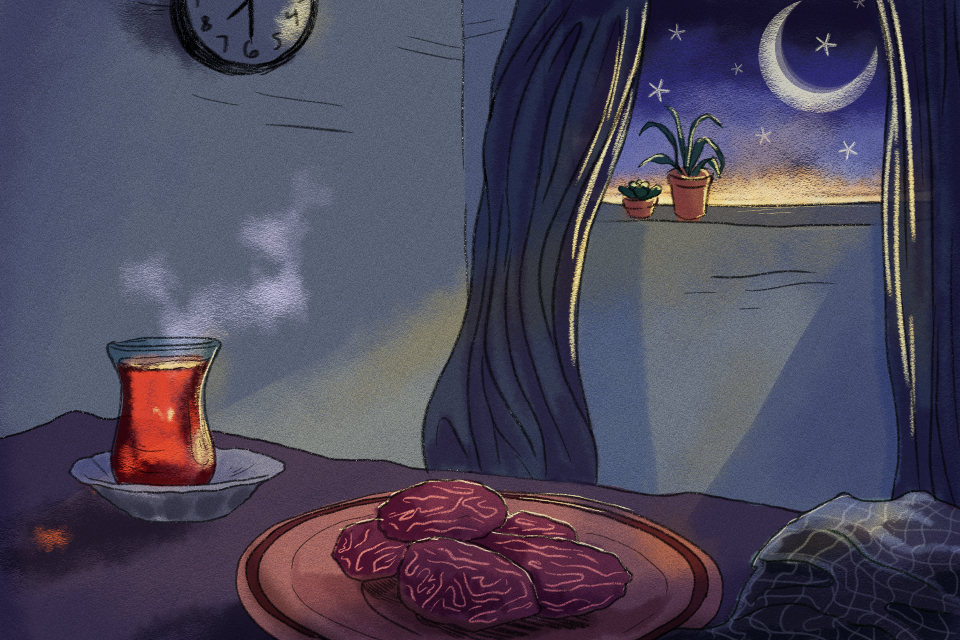 This year, the Muslim Students Association is hosting a number of online events to help students connect during Ramadan, from virtual iftars to Quran readings.

For Rendabel Radian, CC ’23, the month of Ramadan has long been a time to connect with family, self-reflect at a mosque, and join his community in prayer. In Indonesia, where he spent much of his life before coming to the United States, Ramadan was a large-scale family affair.

"We used to have big meals, big feasts, and after we ate, the whole family prayed together,” Radian said. “It was merrier back in Indonesia, but in America we would still pray at home and celebrate the holiday together."

This year, Ramadan will look significantly different for Radian. As a student still on campus during the COVID-19 pandemic and with nearby mosques closed, he must navigate being in self-isolation and without his family for the first time during the holy month.

“It's my first time being without my family during Ramadan,” Radian said. “This is also a month of giving, so I probably would have gone around the city to the mosques to make donations and help distribute food. Instead, I’m out here in isolation.”

Radian’s story likely strikes a familiar chord with many Muslims across the globe. This year’s Ramadan, the ninth month of the Islamic calendar during which Muslims fast throughout the day, will be much more isolated and technology-oriented than many are used to. As COVID-19 cases exceed 2.5 million worldwide, students in the Columbia and Barnard Muslim community are anticipating major changes in their typical observance of Ramadan. However, in the absence of an on-campus community, students are finding creative ways to preserve the community-minded spirit of the holiday through virtual platforms.

Zara Tayebjee, BC ’23, serves as co-social chair of the Muslim Students Association and sits on the Ramadan committee for Columbia Muslim Life. Despite living far away from her peers, she and her peers arranged a number of virtual MSA events to help Muslim students feel connected with their religion and each other.

Last year, the MSA hosted several iftar meals that featured cuisines from countries all across the world where Muslims celebrate Ramadan. This year, to replicate last year’s success on a virtual platform, the MSA is hosting an event called “Our Recipes Our Narratives” on Sundays, in which students show how they prepare traditional food at their iftar, while discussing the stories behind these recipes.

“Last year [at Columbia], each time we broke our fast, it was like breaking our fast around the world, so one day we would eat Senegalese food, another day we would eat food from Malaysia,” Nur Ahamed, GS ’20, said.

Each night, the MSA is also holding “Bring Your Own Iftar” in which students and faculty break their fast together while discussing their traditions and their spiritual connection to the holy month.

As students and faculty share their iftars with one another online, they will have a unique opportunity to learn about each other’s culinary traditions. Tayebjee, an Indian student living in Nairobi, Kenya, said that her iftars sometimes include Kenyan-Indian dishes like biryani, pasta with coconut sauce, and barazi, beans in a coconut sauce with mhambri, a sweet triangular-shaped bread. For Ahamed, whose family comes from Bangladesh, dishes like roasted chicken, beef curry, and biryani are common at his family’s iftars.

While at home in Indonesia and New Mexico, Radian would eat kurma, or dates, es teler, an Indonesian fruit cocktail, and kolak, a dessert made with palm sugar and coconut milk, at his iftars before going to the mosque to recite the Taraweeh prayers. Now on campus and away from his family, he hopes to participate in MSA’s online cultural events as well as midnight hangouts throughout the week to connect with fellow Muslim students across the globe.

For students like Radian, who feared being unable to secure meals on campus due to modified dining schedules during this time, Columbia Dining has started offering grab-and-go Ramadan meals at John Jay Dining Hall that include options like halal chicken sandwiches, salad, fruits and grains, and juices.

The MSA has also planned nightly Quran recitations in order to fulfill the tradition of reading the entire Quran at the end of the month. According to Ahamed, the MSA completed the full recitation of the Quran last year, and this year, he hopes to participate in these recitations virtually in order to “spiritually recharge.”

Through these programs, students and faculty will observe Ramadan as a unified, albeit socially distanced community. Although certain tenets of the holiday seem more challenging at the moment, such as the tradition of donating food throughout the community during Eid al-Fitr, the Muslim festival of breaking the fast in May, Tayebjee sees a silver lining to the situation: an opportunity for Muslims everywhere to reflect on their individual and spiritual relationships to their faith—even if this means listening to the Quran from a laptop or breaking the fast with water and dates on Zoom.

“There's no mosque to go to, there's no people to break your fast with, so it becomes more of an individual thing, and you have to take a little more responsibility for that,” Tayebjee said. “It will definitely help the community to understand more personally what their individual relationship with their religion is."