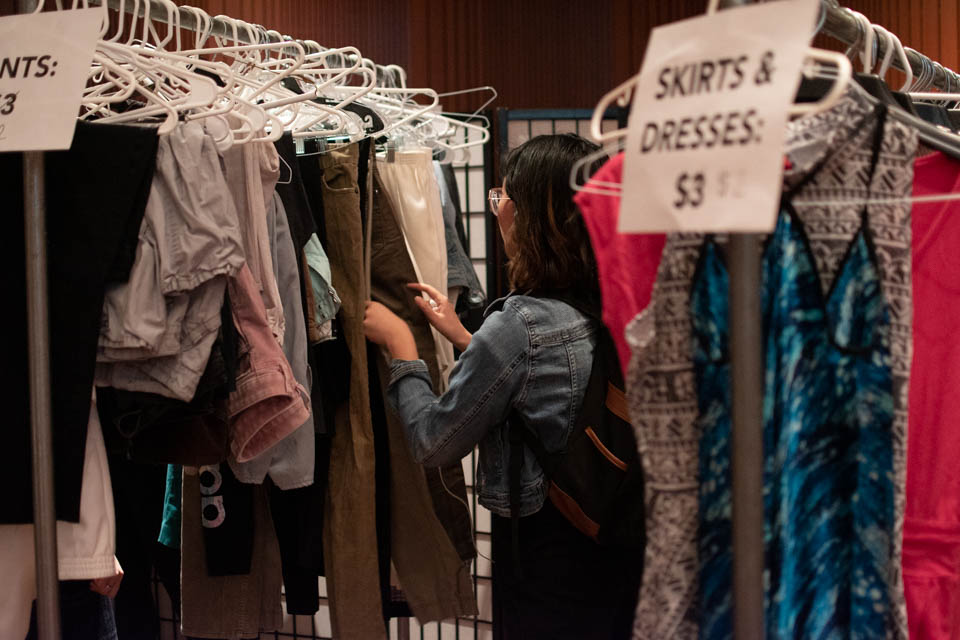 Though it may not seem at first glance that thrifting is harmful to lower-income communities, choosing to thrift in low-income areas or buying secondhand items online can perpetuate gentrification.

For some, the joy of shopping at thrift stores resides in sifting through racks of used clothing, finding a unique pair of jeans or an interesting dress, and discovering that it only costs $2. But for others who primarily rely on secondhand stores to shop for clothing, finding those cool pants or a name-brand dress might be met with relief rather than joy.

Though thrifting around campus presents a multitude of positive environmental impacts, certain issues such as price hikes arise for members of low-income New York communities when the often-wealthy Columbia population thrifts in those neighborhoods or resells clothing that they find there.

A recent infographic by @ssustainably_ on Instagram—an account dedicated to disseminating information about sustainable fashion that boasts almost 25,000 followers—details how the rise of thrifting and the subsequent “resale economy” has led to the gentrification of thrifting. To profit off of the influx of wealth, thrift stores have raised their prices, making their clothing far less accessible to the intended low-income market. Reports from everyone from New York City fashion blogger Patrice Williams to Columbia students who frequent thrift stores echo that the price of secondhand clothes has undoubtedly climbed over the last decade.

A report by the State Press’s Kiera Riley comparing 2010 and 2020 Goodwill valuation guides, which estimate prices for items sold in Goodwill stores, suggests that the price of items has consistently increased. This finding was validated by Lake Sheffield, CC ’24, a New York City native.

“I’ve definitely seen the prices increase at Goodwill, especially for my friends who had to go get coats this winter,” she said. “Also, they run out of clothing much sooner, especially the nicer pieces of clothing—the ones that people find once in a blue moon.”

Over the course of a few years, thrifting transitioned from a frowned upon means of shopping to a common pastime among wealthy folk. ThredUp, a prominent online thrift store, identifies this transition in its 2020 Resale Report, in which one of the sections is titled “Stigma to Status: Celebrities Champion Secondhand.”

“Depop has turned into a place that I’m really not happy with right now,” Rothkopf said. “Reselling has become popularized, especially on TikTok, but the reselling that is promoted now is really disgusting, like overcharging, overbuying, going into lower-income neighborhoods, and buying from there instead of your own.”

Amid the ongoing debate over the ethics of buying to resell and profiting off of clothing intended for lower-income individuals, Rothkopf has been reconsidering whether she will remain on the platform.

“There are resellers that [increase prices for profit]. I don’t do that personally, but I am also responsible for being a Depop seller and promoting Depop, and with that comes promoting those kind of people, so that’s why I’m reconsidering staying on that platform,” she said. “Sometimes, I’m barely breaking even with the amount of money that I am pricing things for, and I think that that’s the way that we should be doing it.”

Though it may not seem at first glance that thrifting is harmful to lower-income communities, choosing to thrift in low-income areas for lower prices or buying items from secondhand sites online can perpetuate gentrification. Sheffield has noticed concerning thrifting trends among Columbia’s incoming class.

“I’ve definitely seen [these trends] from the people who are coming in the class of 2024—the amount of ‘Goodwill thrift hauls’ that I have seen on my feed is kind of wild,” Sheffield said. “For me, when you go to Goodwill, you’re going there because you need to—not because you want a deal.”

“Often, people will go to these stores and find something that’s really nice or a brand that is really cool there, and then—almost as if suggesting that that brand doesn’t belong there and that low-income people shouldn’t be able to have that—they’ll take it and resell it for [profit],” Onyechere said.

Many staunch proponents of sustainability and thrifting argue that median-income students still need to buy clothes and cannot afford wildly expensive slow fashion prices. Without thrift stores, they will default to purchasing fast fashion, thereby hurting the environment. However, it is not the act of students thrifting in and of itself that raises concerns about gentrification but rather, the fact that students who have the means to pay more for clothing intentionally go to lower-income areas to find “better deals” on clothing and resell them for higher prices online.

As an alternative, students could shop at thrift stores in their own neighborhoods and keep those clothes for themselves. If a student purchases an item and later finds that they no longer want to keep it, only then should they resell them and—at a more reasonable cost.

The most sustainable option, however, is to simply buy less.

“Buying secondhand clothes is great for sustainability, but the whole point is to not buy,” Rothkopf said. “Buy a few clothes and be able to wear them for a really long time—that’s the most sustainable practice.”

Onyechere also offers a solution for those who are not satisfied with having only a few pieces of clothing to wear and want a change of wardrobe.

“My mom always liked to keep up with her sewing skills by finding things that didn’t fit and [adjusting] them or reworking clothes into something special for me to wear,” she said. “The best option for sustainable clothing, period, is reworking and re-wearing old clothes, like learning how to sew and doing DIYs.”