Six months into the pandemic, how are Morningside Heights restaurants faring?

Six months into the pandemic, how are Morningside Heights restaurants faring? 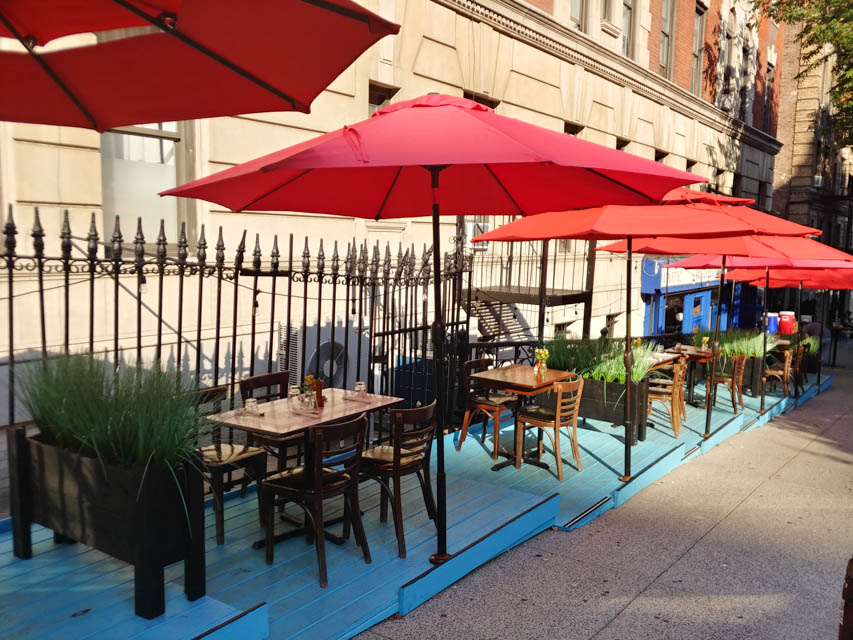 One hundred and one restaurants in the Morningside Heights area are operating outdoor seating. Indoor dining can resume in New York City starting on Sept. 30 at 25 percent of restaurants’ maximum capacities.

The COVID-19 pandemic hit the New York City restaurant industry particularly hard. The New York Times noted that more than 2,800 businesses in the city have permanently closed since March 1, nearly a third of which are restaurants. Under the takeout-only model, some restaurants in the Morningside Heights community reported nearly 90 percent in losses of their normal revenue.

Spectator compiled a list of 164 restaurants in the Morningside Heights, Hamilton Heights, and Manhattanville areas. Of that total, 16 restaurants—all of which had only one location—shut their doors either permanently or temporarily. Sixty-three restaurants are operating on a takeout- and delivery-only model, while 101 restaurants are offering outdoor and rooftop dining.

On Wednesday, Gov. Andrew Cuomo announced that indoor dining could resume in New York City starting on Sept. 30 at 25 percent of restaurants' maximum capacities. Additionally, all patrons will have their temperatures checked at the door, service cannot extend past midnight, and enhanced air filtration and ventilation standards will be in effect.

As the city begins to allow indoor dining for the city’s restaurants, it seems hard to fathom that, as frequently reported, up to 75 percent of restaurants will close, especially as only 10 percent of restaurants in the Columbia area have shut down temporarily or permanently. Yet a recent poll by the New York State Restaurant Association found that nearly two-thirds of over 1,000 establishments contacted said they would likely close by the end of the year without government relief. The restaurant industry will continue to struggle for the coming months, which will impact the lives of thousands of restaurant workers.

Which restaurants are open in Morningside Heights?

Among the restaurants that have closed in Morningside Heights are Uncle Luoyang, a Sichuan and sushi restaurant that also operated a food truck; Cascabel Taqueria, which specialized in Mexican street food; Flat Top, a New American bistro; and The Ellington, a popular neighborhood bar and restaurant.

One hundred and one restaurants in the area are operating outdoor seating, with 30 currently using curb lane booths. Fourteen eateries on Amsterdam Avenue between West 97th and West 110th Streets benefited from the Open Streets: Restaurants initiative, under which sections of Amsterdam Avenue are closed for socially-distanced pedestrian traffic on Saturdays and Sundays. Restaurants that use this additional space include Thai Market, Amity Hall, and Marlow Bistro.

Despite difficult economic conditions, the area has seen the arrival of two new restaurants: Zaad, a Mediterranean eatery that serves dishes like falafel and shawarma, and seafood eatery Baylander Steel Beach, located on the deck of the Baylander IX-514, which served in the Vietnam War and is now docked at West Harlem Piers. The owners of The Calaveras on Columbus and 107th Street will also be opening Calaveras Corner at 201 W. 106th St. in the coming months.

Andrew Ding, who owns The Expat, a Southeast Asian gastropub, emphasized that it is crucial to support restaurants as they are essential to the fabric of the city.

“New York City restaurants are an essential business. There’s around 70,000 people per square mile, and … I think keeping as many commercial kitchens running and able to support the needs of the community is important,” Ding said.