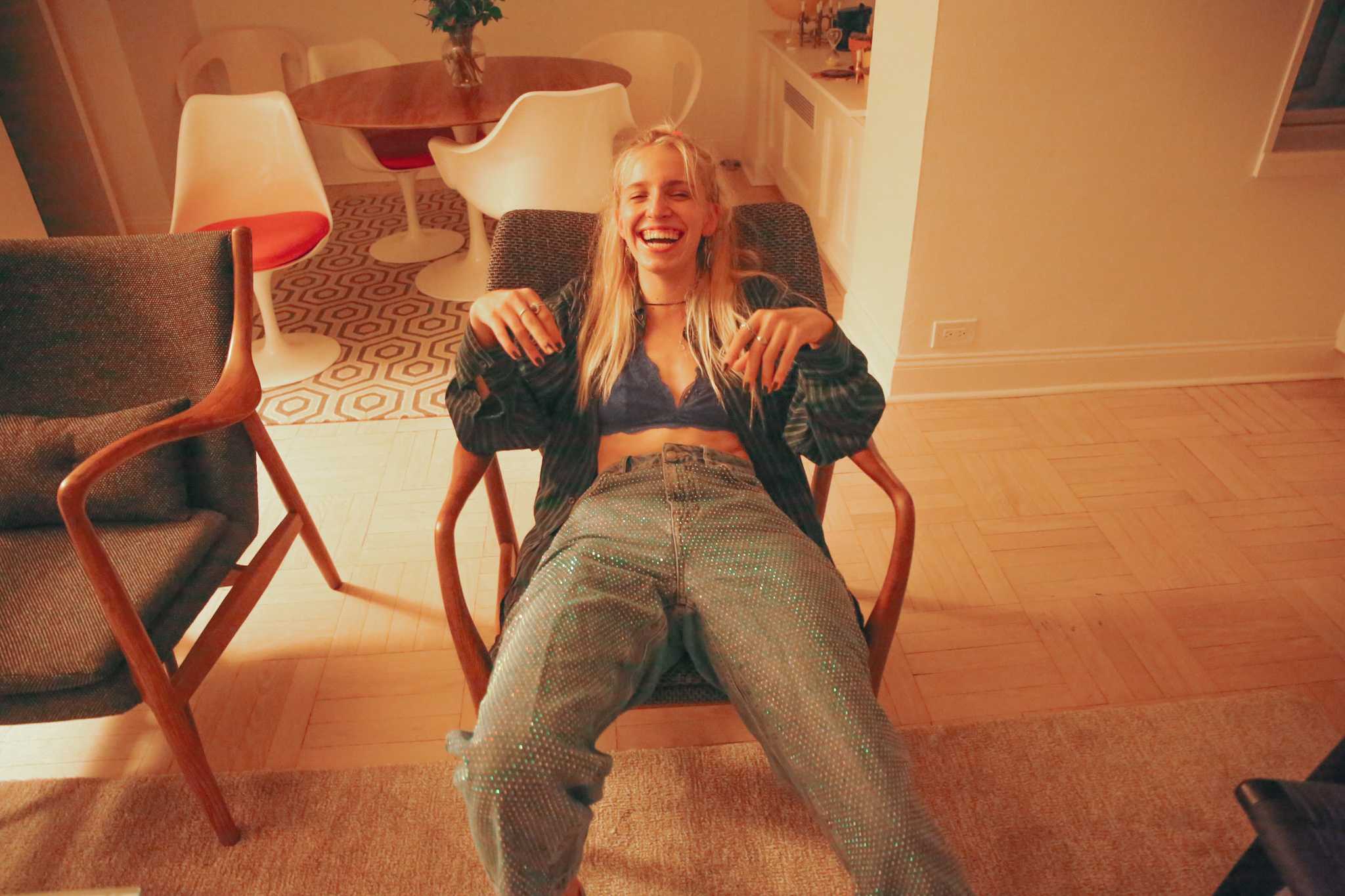 Singer-songwriter Maude Latour, CC '22, has amassed over 12 million streams on Spotify with her diaristic and danceable songs.

From examining metaphysical questions of human nature to surveying the universe and spilling her secrets, singer-songwriter Maude Latour, CC ’22, is on a mission to tell stories, reach transcendence, and start a consciousness revolution.

Latour is a New York City native whose songs have amassed over 12 million streams on Spotify. Growing up, Latour moved from city to city, living in London and Hong Kong before returning to New York City for high school. In high school, she joined an acapella group with her friends, spent countless hours harmonizing, and began to build the platform for her personal revolution against the status quo, a concept that threads throughout much of her music.

“People were very type-A in my high school, and [my friends and I] would just go around wearing bright colors and embarrassing ourselves,” Latour said.

In high school, Latour started focusing on writing songs and performing them in small local bars. During her senior year, she released her first song, “Shoot and Run,” as part of a school project. The song now has more than four million streams on Spotify. From there, Latour decided to take a gap year, using her time to travel, write more songs, and discover her personal sound.

After releasing her first project in 2018, the seven-song album “High School High,” Latour realized she could take more control of producing her songs and fine-tuning her sound. Once she discovered her sound and became involved in the production process, she decided to take “High School High” off of Spotify and release songs that were true to her new sound.

“The first song I made that I was like, ‘Oh, this is my sound,’ was ‘Starsick,’” Latour recalls. “And it was this glitch-pop type of thing. It was cool, quirky, random, glitch-pop production.”

As she developed her skills as a producer, she also honed her songwriting process. She went from writing songs about the ups and downs of high school life to writing more philosophical songs in which she expresses her thoughts and feelings with as much detail and specificity as possible.

As she progressed from high school to college, Latour began to muse on religion, metaphysics, and human mortality in her music. In “Starsick,” she sings that she “was talking to God.” And in her hit “Superfruit,” she sings, “Have I told you that I’m really f*ckin' scared to die?”

“I think I really like sacred things, and I’m inspired by philosophy and religion,” Latour explains. “When it feels the most vulnerable, the most emotional, the most pure, closest to your heart, thing.”

Latour said she writes out of necessity, translating her emotions into words to get her through the day. She also aims to capture her fleeting emotions and process them into something that she can keep forever.

Since Latour divulges so many intimate details of her life in her music, she often feels that her songs are like confessions or publicized diary entries. Her three most recent songs—"Block Your Number," “One More Weekend,” and “Furniture”—are all about modern love and a recent heartbreak. Latour sometimes questions whether she overshares. Should she keep some of her feelings only to herself? Should she continue to produce songs that force her to relive painful memories?

“[Sometimes] I felt like, ‘I can’t believe I give every part of my soul to this,’ every single time I write a song, and I don’t even know if people are listening,” she said.

Most of the time, however, Latour is glad she chooses to make music the way she does—and her audience is definitely listening. On her Instagram, Latour encourages her followers to spill their secrets to her, just as she does to them through her music. And spill they do: Latour reposts some of these confessions to her Instagram story, and her followers open up about unrequited love, missing their exes, and battling the anxieties of college life.

“I think people really want someone to tell their secrets to. And I think it’s a great little activity to actually feel some clarity, some relief from it,” Latour said.

Despite the anxieties of college life, Latour loves that Columbia’s campus is the background to the stories she tells in her songs. Her Columbia courses and the friends and professors she’s met during her time in college have greatly influenced her songs. “Lovesick,” for example, was partly inspired by a discussion in Latour’s English class about how people in the 17th century treated lovesickness as a disease.

“When I heard that, I felt so much relief,” Latour recalled. “I was like, ‘Oh, this feeling actually has physical symptoms, and it could be confused for a sickness, and heartbreak does hurt that much.’”

Even in Latour’s physics course, she finds songwriting inspiration. She is convinced that she will write an entire album on metaphysics one day.

Amid the COVID-19 pandemic, the climate crisis, and numerous human rights dilemmas, Latour finds herself questioning the importance of her music. She wants people to be true to themselves and discover their purpose on Earth, but she also recognizes that being able to do so is a privilege. According to Latour, a revolution needs to happen both internally and externally in order for the world to be a better place—and through her music, Latour wants to bring people closer to their own personal revolutions.

“My music’s entire purpose is to teach you to be introspective, self-actualize, and find transcendence on this earth,” Latour said in one of her TikToks.

As Latour says in “Lovesick,” she’s currently drawing blueprints for how to save the planet, and there are many tasks on her to-do list to make the world a better place. For now, though, she’s doing her part by being unapologetically honest in her music, revolting against small talk, and pursuing what she believes she is cosmically bound to do.