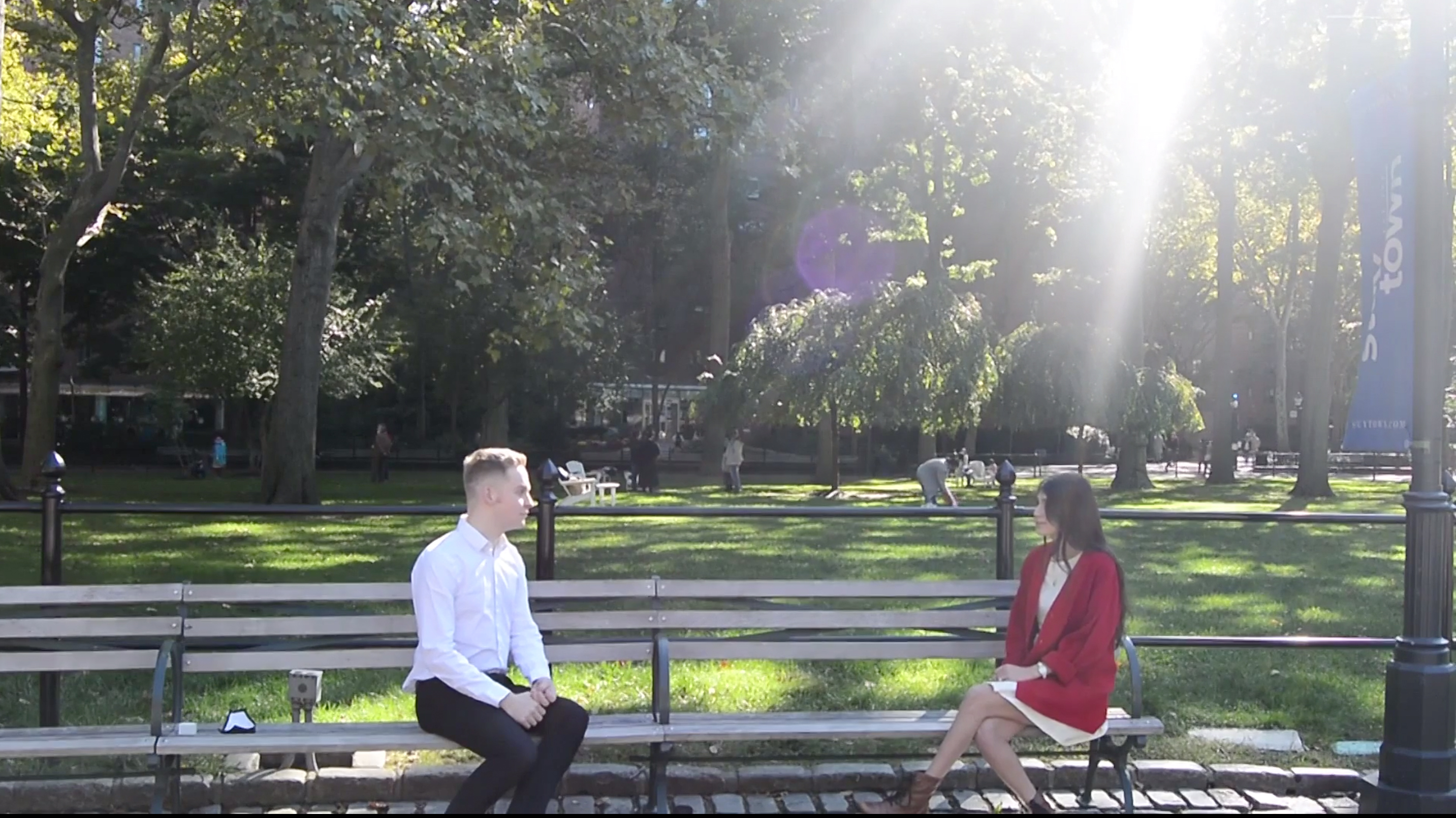 The Columbia Musical Theatre Society experimented with a new format for their production, live streaming a pre-recorded performance—creating the effect of something between a movie and a play.

The highly ornate facade of the Cathedral of Saint John the Divine is a stunning backdrop for Jamie Wellerstein as he dances on its steps, singing about his writing dreams and his newfound love, Cathy Hiatt. The actor playing Jamie must perform in front of a camera in lieu of a live audience; this is the reality of virtual theater that Columbia’s student theater groups are facing.

From Nov. 19 to 21, the Columbia Musical Theatre Society presented Jason Robert Brown’s hit musical “The Last Five Years,” a love story between Jamie, played by Adam Kluge, CC ’22, and Cathy, portrayed by Stephanie Leibowitz, BC ’22, that turns sour as the couple’s personal and professional paths diverge. Directed by Andrea Patella, BC ’21, the show took on a unique format: a livestreamed pre-recorded production.

“This isn’t live theatre and this isn’t a movie,” Patella writes in the show’s program. “[It’s] something entirely new and unexplored. One day we will sit in a real live theatre and feel the thrill of being engulfed in a wave of quiet as the lights dim. Until then, we are lucky to have new methods of storytelling and ways to connect with each other.”

CMTS’s production was composed of filmed segments accompanied by voiceovers of the characters’ songs. Though a challenging feat, the actors were careful not to miss a beat. The cast members also took advantage of being in New York by performing their scenes on Columbia’s campus, the steps of Saint John’s, and the benches of Central Park. The setting, and the mention of Columbia in some of the songs, created a warm sense of nostalgia for students watching from their homes.

Told from both characters’ points of view, the show is known for its dueling timelines: Cathy’s side of the story starts from the end of their marriage, and Jamie’s starts at the beginning of what promises to be a long-lasting love. The show opens with Cathy’s wistful tribute to Jamie; her sorrow is juxtaposed with Jamie’s excitement in the next scene, as he runs around Columbia’s campus singing of his newfound love. The ensuing scenes follow a similar pattern, with Kluge capturing Jamie’s dwindling interest and Leibowitz depicting Cathy’s bubbling enthusiasm as she moves toward the relationship’s beginning. This nonlinear conception of time, Patella thinks, resonates with how spending several months in quarantine has warped our sense of time.

“As we stayed inside to protect others, the days felt endless while the months kept flying by. Though the clock kept ticking forward, so much of life felt as though it was moving backwards,” Patella writes in the show’s program.

Their narratives eventually meet in the middle, with Jamie and Cathy singing in the same scene for the first time. Jamie proposes to Cathy on a bench in Central Park, and the next scene is of their wedding, during which the two harmonize with a beautiful rendition of “The Next Ten Minutes,” a song expressing their desire to spend the rest of their lives together. The actors captured both the nervous hesitation and the innocent excitement that characterizes this major moment in their characters’ lives.

As their respective narratives continue, Jamie gets older, his writing career takes off, and he gives into adulterous temptation while Cathy gets younger, reverting to the enthusiastic aspiring actress who fell in love with Jamie. These disjointed changes were effectively conveyed through the costume choices, with Jamie adopting a professional look and Cathy wearing youthful, floral dresses, and also through the emotional tone of the music.

The show reaches its climax when the audience learns that Jamie has cheated on Cathy, as Jamie sings, “I wrote a story, and we changed the ending.”

At the end of the show, there is irony in Cathy and Jamie’s harmonies, as they both express a goodbye—but with widely different sentiments attached. Cathy, young and in love, sweetly sings, “Goodbye until tomorrow,” while Jamie, worn out by their conflicts, says goodbye to Cathy forever, singing, “I could never rescue you.”

With this bittersweet portrayal of lost love, CMTS’s production of “The Last Five Years” captured the push and pull of isolation and connection—a struggle that feels especially apt given the current moment.