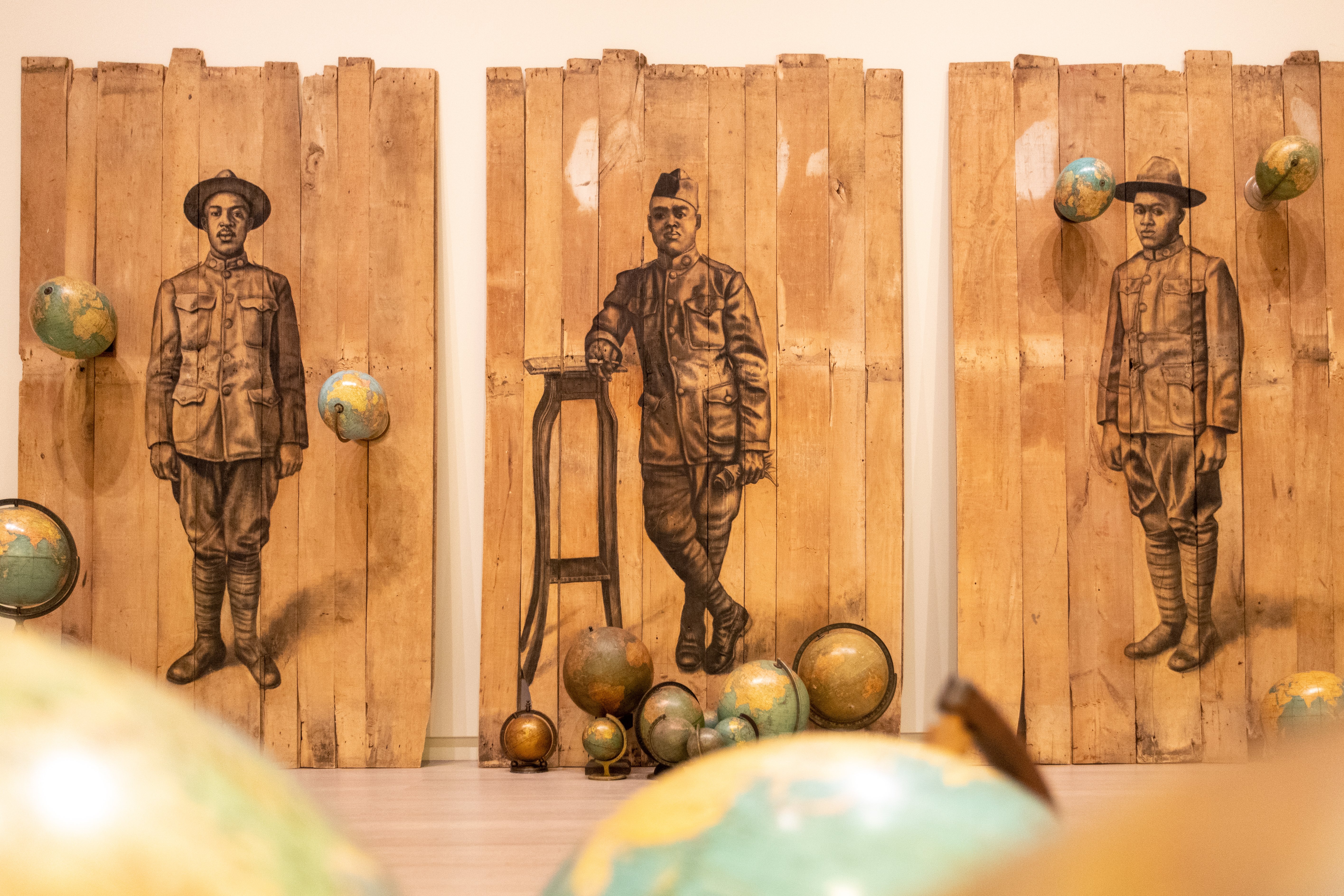 The gallery presents the works of 25 artists of color, which span across a wide variety of media and act in dialogue with ideas and artwork that originated during the Harlem Renaissance. Pictured above: “Autor de Monde” by Whitfield Lovell.

Amid the ongoing pandemic, the Wallach Art Gallery invites both virtual and in-person spectators to confront social issues of the past and present in the Uptown Triennial 2020 exhibition. Curated by Wallach Director and Chief Curator Betti-Sue Hertz, the exhibition is currently available online to all and in-person to Columbia affiliates until Feb. 28.

The gallery presents the works of 25 artists of color, which span across a wide variety of media and act in dialogue with ideas and artwork that originated during the Harlem Renaissance. Historical pieces, including Alain Locke’s anthology “The New Negro: An Interpretation” and James Weldon Johnson’s book “God’s Trombones,” which have been seen as backbones of the influential art and literary movement, serve as inspirations for the contemporary artists’ works.

Columbia art history professor Elizabeth Hutchinson spoke about the Harlem Renaissance’s lasting impact on today’s art. During the Harlem Renaissance, artists created a diverse representation of everyday Black life in America and allowed audiences to contemplate gender and sexuality through their work, according to Hutchinson. They also founded an artistic community that persists today.

“I would say that the most exciting thing is the establishment of community-based initiatives and organizations in Harlem,” Hutchinson said. “I do think that there’s a legacy since then [of] community-based organizations … supporting artists, training younger generations, creating spaces for people to show their work.”

Several pieces on display respond to this year’s civil activism against police brutality. Dianne Smith, a multimedia artist who lives in Harlem, presents a large-scale installation named “God’s Trombones,” riffing on Johnson’s book from the Harlem Renaissance. It features three screens playing video and audio of significant moments from Black-American history on a wall covered by braided brown butcher paper. The names and photos of Jacob Blake and other victims of police violence, juxtaposed with historic imagery of the enslavement and incarceration of Black people, speak to the history of racial stigma that underlies American society.

“All of a sudden, there’s this awakening … but Black people in this country had been made to feel like we’re making stuff up, that all of the ways in which life has been problematic for us and living in a space of trauma has not been true,” Smith said, “And I think James Weldon Johnson’s work speaks to that.” 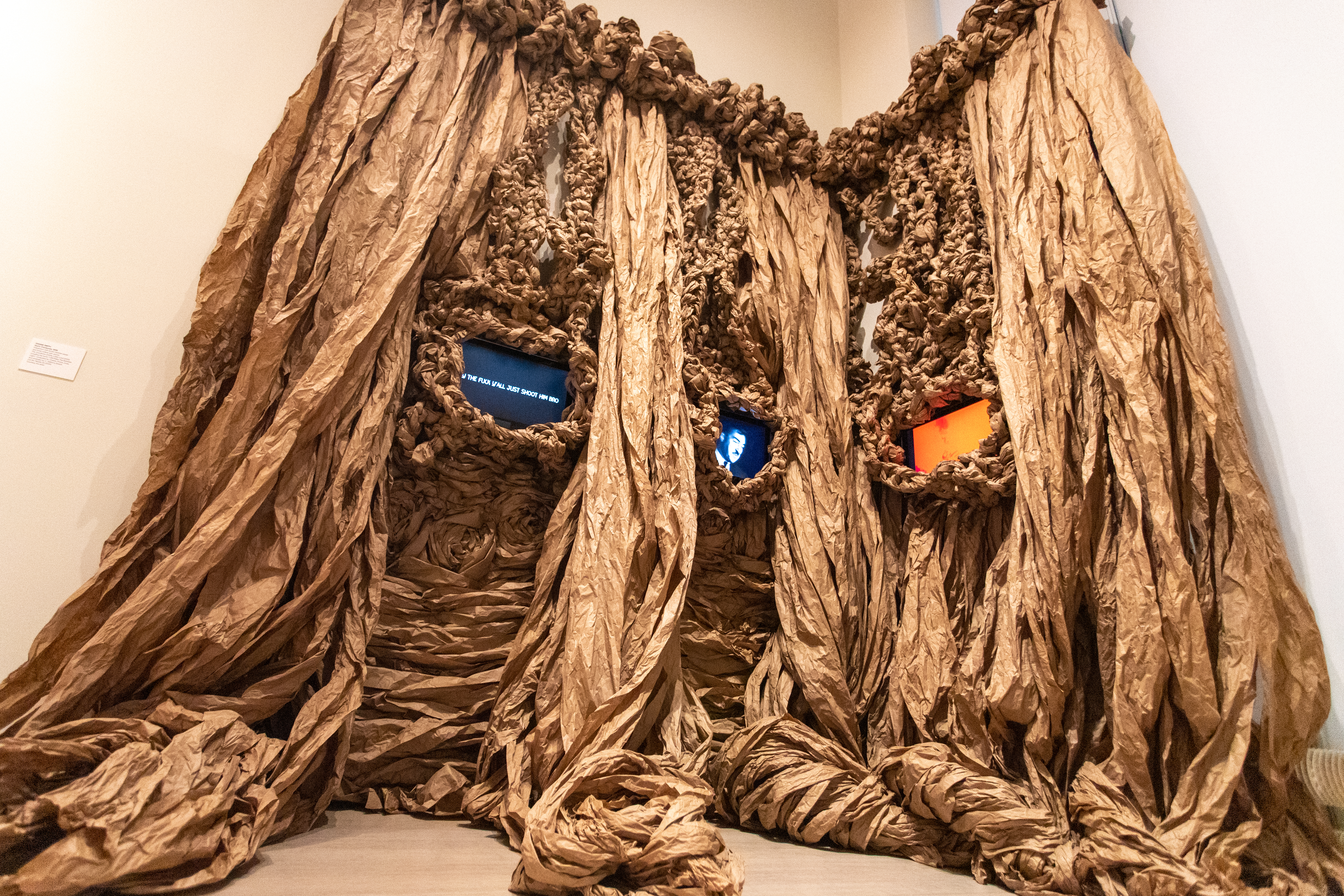 Photographer and artist Renée Cox also used artwork from the past to inspire new work that empowers people of color. As part of her “Signing” photo series, she revisits Howard Chandler Christy’s historical painting “Scene at the Signing of the Constitution of the United States,” critiquing racial stereotypes by recreating the painting and replacing its subjects with models of color.

The exhibit also grapples with our relationship to technology. Tariq Al-Sabir’s one-minute loop video projection “time & distance” immerses the visitor in an audiovisual experience; it shows Al-Sabir staring directly at the camera, putting on and taking off his mask on loop. The video is accompanied by Al-Sabir reading journal entries, each related to feelings of isolation and the challenges of relying on technology during the pandemic.

“The piece … was all about Black people and technology and how we relate to it,” Al-Sabir said. “And that was before I knew we were going to be forced to center our lives around technology.” 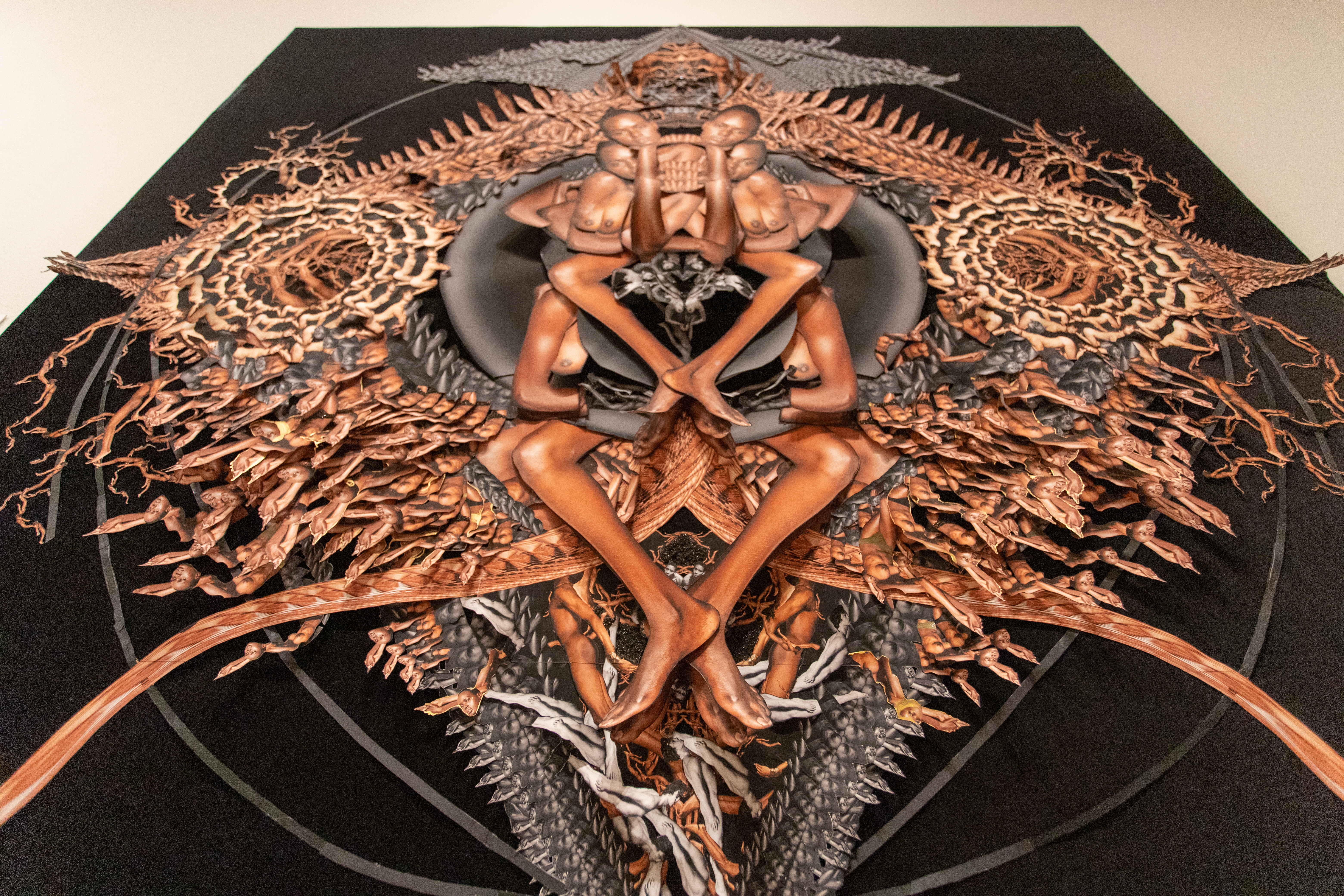 The gallery’s opening was postponed from June to September due to the pandemic. Since the exhibit is only accessible to the general public in a virtual format, the Wallach Art Gallery has organized virtual public programming that invites members of the Harlem and Columbia communities to join scholars in conversations about the history of the Harlem Renaissance and important literary and artistic works from a century ago.

Lewis Long, associate director of the Wallach Art Gallery, cited the newly digitized book “New Negro,” compiled by Alain Locke, as an example of how the Uptown Triennial is providing enhanced online access to art. One of the first color-plated copies of this book dating to 1925, considered a cornerstone of the Harlem Renaissance, is presented to the public fully online.

“To be able to make this book available so that you could see it in its physical form if you walked in the gallery is one thing, but to now have these digital capabilities that allow you to flip through every page of the book without leaving your home … that is the level of access, the creativity,” Long said.

Cox thought the exhibit might have been open to the general public through timed and limited entrance protocols, following a similar system used by other New York City museums and galleries. The Wallach Art Gallery is currently using this system but restricts visitation to Columbia affiliates who have completed the COVID-19 protocols for returning to campus. A green pass from ReopenCU, the University’s tracking app, is also required to enter the exhibition.

In the past, the Wallach Art Gallery has promoted an artistic connection with its neighbors through its triennials, which have always been open to the general public. Hutchinson noted that, like many other museums and galleries in New York City, the gallery’s ability to serve as an accessible space for Harlem community residents has been hindered during the pandemic as cultural institutions must prioritize public health.

“Columbia’s expansion into West Harlem continues to need to hold itself to a very high standard of access and welcome and interaction and engagement with the community. I don’t think it’s where it needs to be yet, but I think that the Wallach’s commitment to these triennials is an important piece of that project,” Hutchinson said.

Long expressed his intent to welcome the public to view the exhibition in person in the future, but as the number of coronavirus cases in New York City continues to rise, the art world is finding new and innovative ways to bring exhibitions to wide audiences.

“We’re keeping our fingers crossed [that] things will shift. We literally had started to think about how we were going to open to the public, and then there was an uptick in the cases,” Long said.

Staff writer Vincent Hou can be contacted at vincent.hou@columbiaspectator.com.