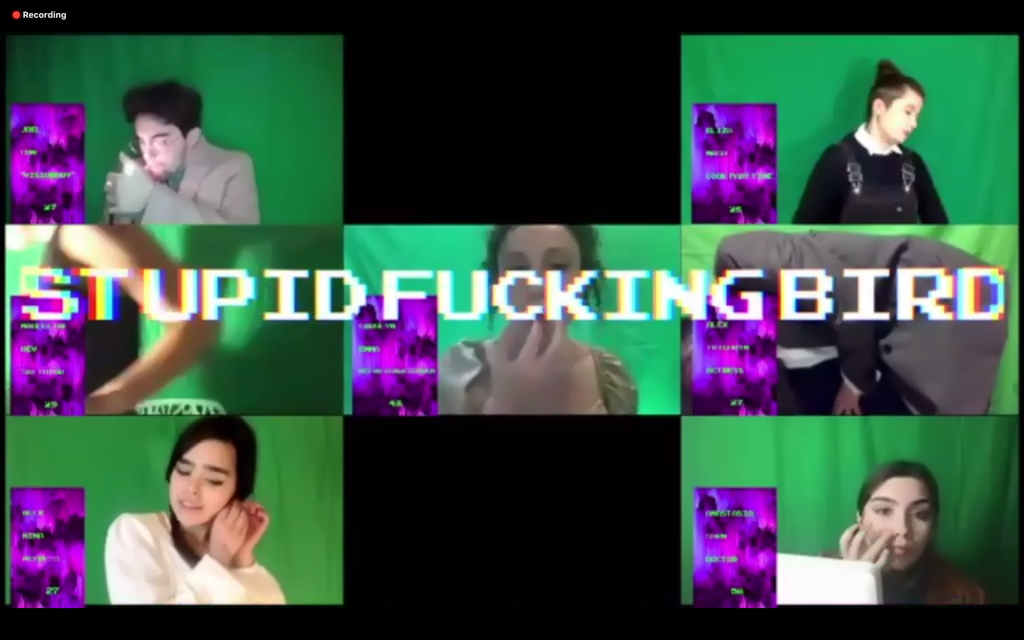 “Stupid Fucking Bird,” the Barnard theater department’s final production of the semester, is a biting meditation on the meaning of intimacy, art, and self-worth. Full of explosive performances and psychedelic visual effects, this modern adaptation of Chekhov’s “The Seagull” is a triumph of virtual theater.

The characters stir impatiently in their green-screen squares. Mash runs over her lines. Nina puts on earrings. Conrad lights a cigarette. Staring down the barrel of his webcam, Conrad informs the audience that the play will begin as soon as someone types in the chat:

The Barnard theater department presented the play “Stupid Fucking Bird” from Dec. 10 to 12 over Zoom. Written by American playwright Aaron Posner, the play is a “sort-of adaptation” of Anton Chekhov’s “The Seagull,” riffing off the original premise of one showbiz family’s artistic and personal crises.

Irreverent and devastating, the performance cut far deeper than one might expect, given the tongue-in-cheek title and promotional photos of seabirds mid-squawk. Returning to Barnard after directing “Revolt. She Said. Revolt Again” in March 2019, guest director Colette Robert delivers another experimental production—the gorgeous performances and psychedelic set design take us on a winding, meta-theatrical trip down the rabbit hole.

Most of the cast is tangled up in one big love hexagon. Conrad, played by Joel Meyers, CC ’21, is the angsty playwright son of the famous actress Emma, played by Carolyn Friedman, CC ’21. Conrad is desperately in love with Nina, played by Alex Prezeau, BC ’24, who is starring in his newest work, “Here We Are.” Soon after the performance, Nina leaves Conrad for his mother’s boyfriend, Trigorin—a smooth-talking celebrity-writer played by Jules Marino, CC ’22.

In her director’s statement, Robert compared the opening lines of Conrad’s play to her own inner monologue during the pandemic.

Prezeau’s voice is calm and quiet, reminiscent of a three-minute Headspace meditation. But her words are unsettling, highlighting the surreal disconnect of virtual theater. She addresses each member of the cast, asking where they are in space and time. Clocking in at just over two-and-a-half hours, the production is unpredictable, abrasive, and high-energy from start to finish. With marathon performances and dizzying optics, “Stupid Fucking Bird” is a relentless gut-punch of a play.

In the opening scene, we meet Mash and Dev. Portrayed by Eliza Ducnuigeen, BC ’21, Mash is Emma’s part-time cook and family-friend. A member of the play’s unrequited-love club, she devotes herself to Conrad while providing us with much-needed comic relief. In her first moment alone onstage, she stares at us through heavy eyeliner, looking thoroughly unamused.

She then breaks into an alt-rock ballad comparing life to a rotten apple, closing her mini-concert with a wry “shut up.” While Mash’s opening scene with Dev, Conrad’s best friend, was a fairly faithful spin on the source play’s dialogue, her impromptu open-mic takes a sharp turn into absurdity.

Meanwhile, Dev, played by Madeleine Watkins, BC ’23, is deeply in love with Mash. One of the more optimistic characters and an all-around likable human being, Dev provides level-headed solace even as the play becomes more and more chaotic.

Meyers’ performance stands out for its complete transition from caricature to bitter realism. When we first meet him, Meyers plays an incredibly convincing snob, parading around like a high-art messiah. In one particularly pompous tirade, Meyers channels Conrad’s existential angst and resentment toward his successful mother into scathing theater criticism.

“We need new kinds of theater! New forms! I mean, fuck, do you have any idea what’s passing itself off as theater these days? Do you ever go?”

Following his friends’ lukewarm reviews of “Here We Are” and his mother’s outright derision, Conrad descends into a self-destructive spiral. During one confrontation between Conrad and Nina, the screen begins to distort, smearing the background colors. Conrad has just shot and bagged a seagull on the lake—the symbolic stand-in for Nina—in an unhinged attempt to hold onto her. The video work is gorgeous—a digital solar flare intensifying the already explosive performances.

Meyers’ final monologue is, quite simply, a stunning piece of acting. He leaves the audience with such emotional whiplash that we hardly know whether to stand up and applaud or go lie down. The cast’s anxiety builds and builds, piling up like all of this year’s hurt.

There is no magical resolution for the characters or the audience. The play just ends. Frozen in the moment of his suicide, Conrad holds out a gun in a teal-blue room and shoots at the screen. He pauses for a moment and then stares at the camera once more.

What began as an irreverent Chekhov parody ends in stunning heartbreak. “Stupid Fucking Bird” is a triumph—a biting, wounded meditation on the meaning of art, intimacy, and self-worth.