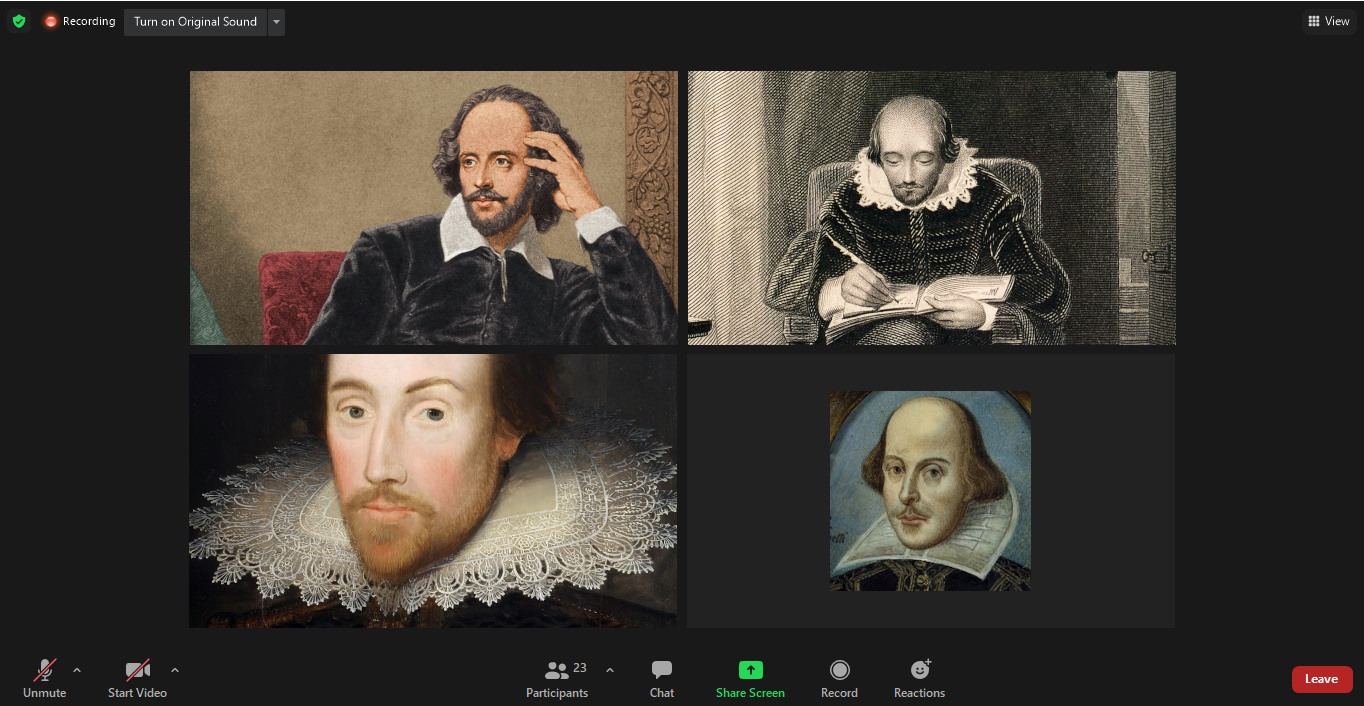 “All the Zoom’s a Zoom” made use of every Zoom feature imaginable, from pirate-eyepatch and flower-crown filters to characters' gossip in the chat.

Beatrice and Benedick dance from the shoulders up in their separate Zoom squares. Oedipus and Jocasta deal with their crumbling marriage, while Tiresias and Creon gossip in a breakout room. The Globe Theatre and the Theatre of Dionysus are the same Zoom stage.

On Dec. 4, King’s Crown Shakespeare Troupe presented “All the Zoom’s a Zoom,” the second installment of this year’s virtual “Shakescenes” festival. The night consisted of three comedic scenes: the first from “Much Ado About Nothing,” then “Twelfth Night,” and finally, Richard Orloff’s 2003 Sophocles parody “Oedi,” a clear departure from the Shakespearean theme. As master of ceremonies, KCST President Catherine Ferrante, BC ’21, provided the necessary context for each scene in this wonderfully silly showcase and much-needed study break.

Act II, Scene I of “Much Ado About Nothing,” directed by Talia Rosen, BC ’22, kicked off the night’s performances. The scene unfolds during a masquerade ball, where five inebriated partygoers find it increasingly difficult to recognize one another as the night goes on.

The actors’ drunken recitation of Elizabethan English was incredibly charming, as was the near-universal presence of the Zoom mustache filter. When the characters drank, their mustaches would vanish, or better yet, reappear on wine glasses and red solo cups. Benedick, played by Sydney Gerlach, BC ’24, delivered a delightfully exasperated monologue, rolling out some of the greatest of Shakespearean insults: “If her breath were as terrible as her terminations, there would be no living near her. She would infect to the North Star.”

Beatrice, played by Cas Sommer, BC ’24, delivered a sleepier, almost delirious performance, speaking with such enormous gestures that the Kurt Cobain sunglasses perched on top of her head slipped over her regular glasses, where they remained for the rest of the scene. Before slumping out of view, she bid adieu by calling out to Don Pedro and Leonato with a magnanimous “God give you joy!”

Carrying on the theme of mistaken identity, Alexandra Haddad, BC ’21, directed an excerpt from “Twelfth Night,” during which Olivia, portrayed by Eleanor Babwin, BC ’24, falls for Viola, played by Audrey Nicholson, CC ’23, who is disguised as a man. Babwin delivered an endearing and playful performance, hopping around her kitchen table. In a modern, distinctly 2020 adaptation, Haddad replaced Olivia’s veil of mourning with a face mask and her purse with a Venmo account.

Closing the night with another comedy of errors, “Oedi,” directed by Sal Volpe, GSAS ’21, reimagines Sophocles’ “Oedipus Rex” as a reality TV show. The play retells the moment Oedipus, portrayed by Elsa Chung, CC ’23, realizes that he has killed his father and married his mother, Jocasta, played by Susannah Yezzi, CC ’24. Despite the famously disturbing premise, Orloff’s dialogue is witty, light-hearted, and wildly entertaining. The majority of the plot deals with managing the press coverage of the murder and Oedi asking Jocasta for a divorce.

“Jocasta, I must tell you something most horrible, worse than the most terrible news you could imagine,” Oedi says.

“You didn’t like my brisket last night,” she sighs.

Volpe only amplified this levity, outfitting Tiresias with pixelated sunglasses and replacing the ‘O’ in Oedi’s screen name with a wedding ring emoji. Chung and Yezzi had a terrific back-and-forth exchange; at one point, they broke down laughing at Yezzi’s silent, slow motion ugly-crying. The whole play was barely 20-minutes long and felt like an uncommonly funny SNL sketch. “Oedi” ended with the small cast in a fit of laughter and Ferrante squealing, “I’m literally obsessed!”

“All the Zoom’s a Zoom” made use of every Zoom feature imaginable, from pirate-eyepatch and flower-crown filters to Tiresias and Creon’s gossip in the chat. The last page of the program even dedicated a special shoutout to “Zoom Inc.” just after Shakespeare himself. After a semester of lamenting Zoom fatigue, KCST sent us into finals season with a hilarious, energetic celebration of the virtual stage.