Ditching sarcasm for sentiment, the 126th Varsity Show is a big-hearted tribute to Morningside Heights

Ditching sarcasm for sentiment, the 126th Varsity Show is a big-hearted tribute to Morningside Heights 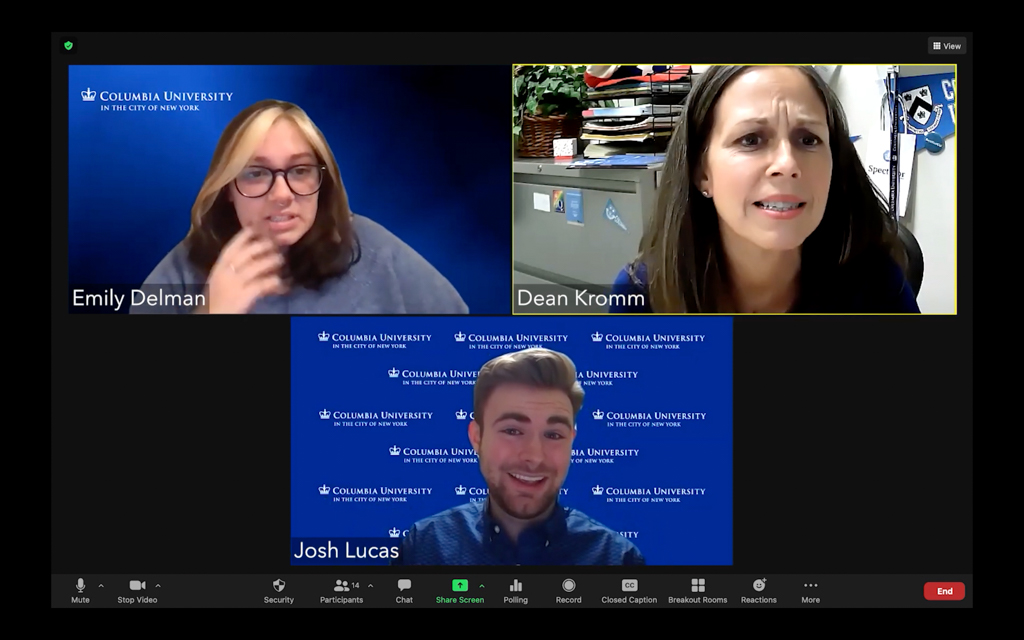 Courtesy Of / The Varsity Show

The spoken-word poets in the back of The Hungarian Pastry Shop are organizing a Marxist revolution. On the other hand, the elite members of the Saint Anthony Hall fraternity are reminiscing about their golden days that were once filled with champagne and cocaine. Meanwhile, AJ, an ambitious economics major, is stuck in the middle of their hilariously pretentious feud.

On Jan. 2, the 126th Annual Varsity Show streamed live on YouTube. The group’s first-ever virtual production “We Hope This Musical Finds You Well” was directed by Sophia Houdaigui, BC ‘21, written by Corinne Rabbin-Birnbaum, CC ’20, with story by Louisa Melcher, CC ’20, and choreographed by Sophie Visscher-Lubinizki, BC/JTS ’21.

The show opens with a brightly colored montage of Morningside Heights and Columbia’s campus, accompanied by a cheerful jazz overture. The camera settles on Alma Mater’s sandal and then splits into pixels. “QUARANTINE” flashes across the screen, and AJ, who is played by Jackie Chu, BC ’22, appears—equipped with a ukulele and a stack of questions for University President Lee Bollinger:

The ensemble joins her onscreen, playing homemade percussion instruments, complete with a can of Café Bustelo for a snare and a bottle of acetaminophen for a maraca. While singing, they go about domestic life in quarantine baking bread, watching “Tiger King,” playing Animal Crossing, and day-drinking. The tune—composed by Ian Yan, CC ’22, and with lyrics by Callum Kiser, CC ’21—is light-hearted, folksy, and full of complaints about Columbia’s response to the COVID-19 outbreak—or lack thereof.

The next notable scene opens in the virtual Butler Library stacks where AJ is shelving books while her friend Oliver, played by Ethan Woo, CC ’20, discusses a confusing competition held by the student engagement office. A low-income student, AJ is intrigued by the networking opportunities afforded to her as a member of St. A’s. Once alone in the stacks, she imagines working her way into the 1 percent in “Self-Made Millionaire,” a delightful, dancey number with a standout brass section.

Then we’re transported underground to a cartoon subway station, where AJ and Molly, played by Samantha Seiff, CC ’22, meet up with the St. A’s members. Here, the Varsity Show’s first-ever animation team takes over, filling the screen with stills in artistic styles varying from graphite portraits to New Yorker-esque cartoons. This illustrated interlude, though slightly disorienting, showcases the incredible innovation and charm of this year’s production.

We return to live-action on Amsterdam Avenue when a masked Raindrop, played by Adam Kluge, CC ’22, slips inside The Hungarian Pastry Shop, where he has arranged an impromptu meeting of the black turtleneck-clad Columbia Performing Arts Collective. With screen names like Topsoil, Famine, and Drought, the group discusses the economic inequality on campus.

“I can’t help but notice that capitalism has really been prevailing on campus recently. Needless to say, this makes me sick,” Raindrop says.

Raindrop, top of his class in Beginning Fiction Workshop, begins a sort of free-association slam poetry session. The artists writhe in their Zoom boxes, whispering “save Book Culture,” and chastising Nancy Reagan all while pounding on the café tables and clinking spoons against their saucers, hoping percussion will help them brainstorm ways to take down “The Man.” The resulting number is “Eat the Rich,” a genuinely catchy, if rather tame manifesto for the ordinarily daring Varsity Show, crammed with rap interludes, a bridge sampled from “Les Misérables,” and Latin phrases. The song pauses rather abruptly after Drought suggests exiling St. A’s members to Siberia, with Raindrop shouting, “No! No forced relocation!”

The collective settles on stealing the St. A’s members’ most prized possessions: their Canada Goose jackets. The number closes with incredible energy—the excellent brass section stands out once again alongside the percussion—not to mention the fact that Kluge belts out an incredible high-note to finish the number.

Audition tapes and advertisements for local brands pop up throughout the performance—part love letter, part sendup of the Morningside Heights restaurant community. The audition tapes showcase three failed attempts to represent Strokos, the perpetually scaffolded eatery across the street from John Jay and Mount Sinai Morningside. One character recalls waiting in the smoothie line and meeting his girlfriend—who, incidentally, is a thousand-year-old “demonic entity” currently double-majoring in math and classics.

We then arrive at St. A’s for the pledge party where the society members stand dressed in matching black and white gingham. Hailing from Paris, Ohio, Zlad—played by Joseph Meyers, CC ’23,—delivers some of the most memorable one-liners in the show in a phony French accent. He sprinkles incense ash onto the floor to “feed the Roomba,” with flamboyance reminiscent of Moira Rose from “Schitt’s Creek.”

Mid-party, “WASP extraordinaire” Sebastian, played by Erik Larsson, CC ’23, breaks into song about the good ol’ days of St. A’s. He stands in front of a white curtain with his hair slicked back, staring into the distance. Backed by a baroque fugue, “Sebastian’s Lament” clocks in at maximum pretentiousness—but halfway through, the orchestra suddenly switches genres, sliding into a razzle-dazzle number worthy of Kander and Ebb. Zlad and Veronica appear in miniature above Sebastian’s shoulders, performing a Fosse routine on cartoon clouds:

“We’ve suffered a strain. We’re short on champagne. We’re snorting Splenda after we ran out of cocaine.”

Sebastian takes this opportunity to lay out the “proper way to rave,” his voice a soaring falsetto. Here, the orchestra switches again, moving into a delicate waltz. The ensemble spins across a rose-tinted screen, champagne flutes in hand, gliding in a dainty pas de bourrée. Sebastian stands center-screen, looking around with approval. Hurled from the likes of Liza Minnelli to Tchaikovsky and back again—it’s a hilarious, surprisingly cohesive number.

Two other ballads stand out—both sung by Woo in a lovely tenor. Unlike the over-the-top hilarity of the St. A’s members and the Performance Art Collective, Oliver sings in all sincerity to AJ about the importance of supportive friendships and prioritizing mental health over academic achievements.

In the FaceTime serenade, “You’ve Got Time,” violinist Connie Cai, BC ’22, and cellist Cy Gilman, CC ’22, complement Woo’s voice perfectly. He assures AJ that she will have enough time to see her friends and to see New York City—lyrics particularly resonant to a student body that is scattered across the globe. The song continues with the same bittersweetness of celebrating Morningside Heights from a distance. Oliver addresses AJ as well as the audience:

“At Columbia,” he sings, “it’s easy to feel like you’ll never be enough ‘til you’ve done it all.”

This year’s Varsity Show confronts anxiety within the student body, but it does not dwell on it. Clocking in at two and a half hours, the production team offered up breathtaking orchestral arrangements and choreography, not to mention an outstanding vocal and well-timed comedic performance. Unlike many of its prior productions, the 126th Varsity Show strayed from biting satire and entered into unusually warm-hearted territory—a welcome coziness to ring in the new year. The production is an incredible achievement, with the cast and crew using the virtual platform to call for greater kindness in the midst of chaos, knitting a global audience back into a cohesive community.