Beyond the silver screen: a look at the vibrant history of Harlem’s Black film scene

Beyond the silver screen: a look at the vibrant history of Harlem’s Black film scene 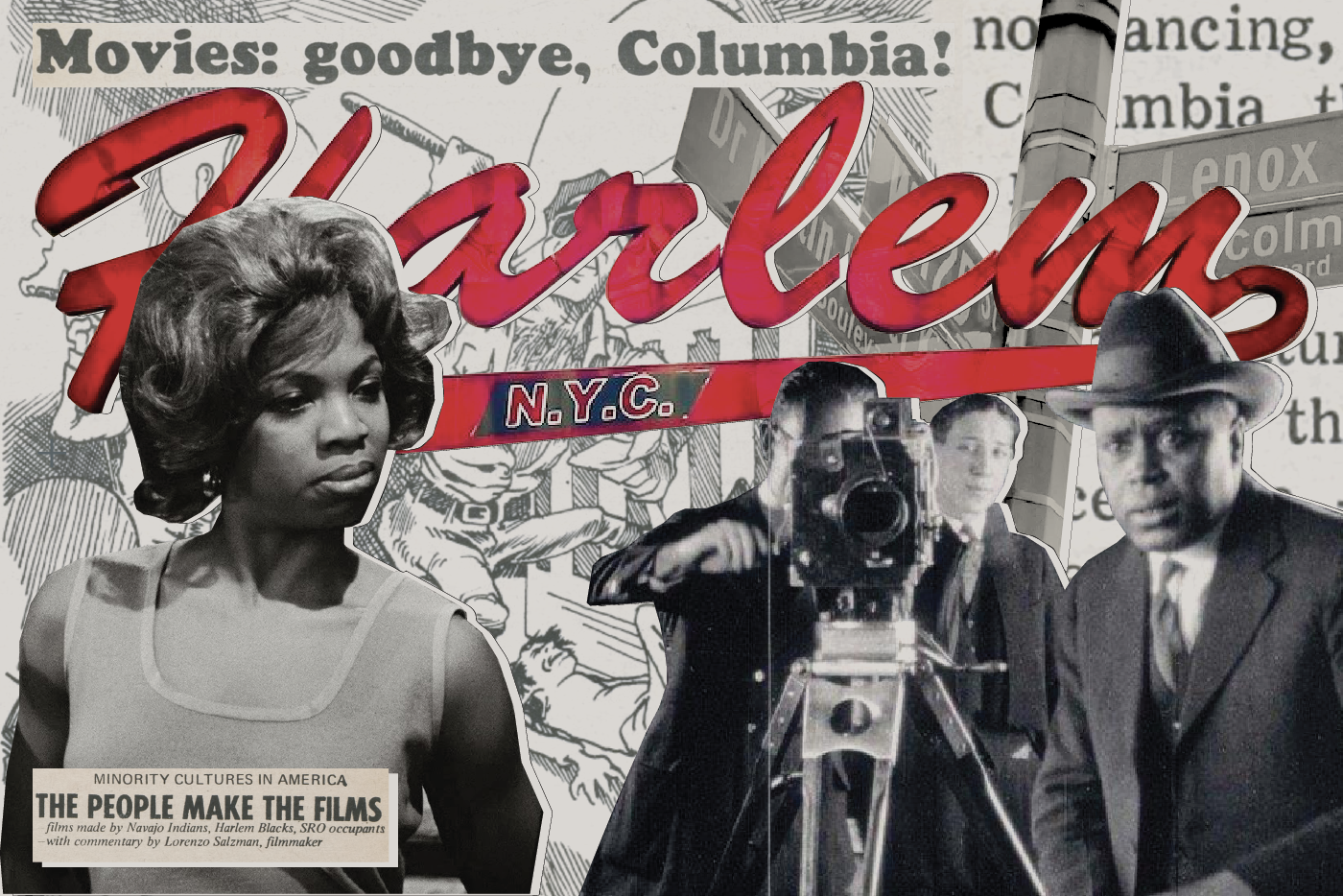 While Harlem’s film history began in black and white, the stories that come out of the neighborhood are as colorful and eclectic as their ever changing community.

It only takes a stroll through the neighborhood to understand film’s place in Harlem’s history. The Jets of 1961′s “West Side Story” patrolled 110th Street, Denzel Washington’s titular character hung out at the—now-defunct—Lenox Lounge in 1992′s “Malcolm X,” and the quirky Tenenbaum family resided at a house on the corner of 144th Street and Covenant Avenue in “The Royal Tenenbaums.” A walk around the 125th Street area holds both the grand past of Harlem film and present-day big-name cinema with the remains of the Loew’s Victoria Theater and the current AMC Magic Johnson Harlem 9.

Over the years, Harlem has maintained an essential role in American film. Its diverse community has a rich history of creatives who have continually pushed Black narratives to the forefront. Today, the Harlem film scene continues to provide a safe haven for underrepresented stories and creators––an effort that dates back to the Harlem Renaissance.

Beginning in the 1830s, racist portrayals of Black individuals were popularized by the American entertainment scene with the emergence of the Jim Crow persona, which was almost always portrayed by white actors in blackface. Jim Crow would go on to become the classic minstrel caricature of the Southern Black person, leading to the popularized racist perception of Black Americans as lazy, untrustworthy, dumb, and unworthy of integration into society.

With the popularity of Jim Crow came the subsequent rise of minstrel shows, consisting of comic skits, variety acts, dancing, and musical performances by white people in blackface make-up. By the 1840s, white-staged minstrel shows, in cities like New York, had taken the nation by storm.

These racist depictions of Black people were picked up by the American film industry as it emerged during the turn of the 20th century. Early silent films, such as “How Rastus Got His Turkey” and “Rastus in Zululand,” were created with the intention of depicting the Black experience but, like minstrel shows, perpetuated Black stereotypes. Black individuals—like Uncle Tom in Edwin S. Porter’s rendition of the novel “Uncle Tom’s Cabin”—would appear in movies solely for the purpose of entertaining a white audience, often in subservient roles such as maids, mammies, domestics, and sidekicks.

As a response, many Black filmmakers began creating their own independent production companies to circumvent the mainstream Hollywood industry. In 1919, Oscar Micheaux, a pioneer of Black feature films, released “The Homesteader,” the first feature film with all-Black leading actors. Micheaux’s works, often referred to as “race films” due to their predominantly Black casts and audiences, were a product of the Harlem Renaissance. In these films, Micheaux and other Black directors of his time focused on crafting narratives that subverted the stereotypical and offensive imagery that dominated mainstream Hollywood by writing about the daily struggles of motivated Black individuals, working to reframe the public perception of the Black experience in America.

“[Black film] has always been the barometer of how we see ourselves and how we fight in the world,” C.R. Capers, founder and CEO of Harlem FilmHouse, said. “It was never for a white audience. However, because there’s not a lot of [Oscar] Micheauxs and the price of entrance is so high, once a Black film becomes popular, automatically it causes others to monetize it, and you’ll see black culture fall back and then re-emerge and reimagine itself.”

The work of directors from the early 20th century like Micheaux remains relevant to modern audiences and researchers alike. Andrea Battleground is a Harlem film archivist working at the Schomburg Center for Research in Black Culture and collaborating with the Maysles Documentary Center as a series curator. Her upcoming series will focus on the legacy and future of Harlem filmmaking. She described her process of research for the project as finding what makes Harlem so important for film, especially during its Renaissance.

“That’s when you’re getting into that space where we have all of these Harlem Renaissance stories. … Those stories shine so bright,” Battleground said. “They become a little bit mythologized, and I think that the way in which we conceptualize Harlem becomes a big touchstone.”

Battleground pointed further to William Greaves’ 1974 documentary “From These Roots,” which creates a story of the Harlem Renaissance through period photographs and narration by Brock Peters, a Harlem native known for portraying a variety of leading roles in film, most notably Tom Robinson in the 1962 film adaptation of Harper Lee’s “To Kill a Mockingbird.”

The Harlem Renaissance also worked to provide opportunities for up-and-coming Black actors. Paul Robeson, Law 1923; Nina Mae McKinney; and Canada Lee all acted in Harlem theaters while making the transition to film. Films of the Harlem Renaissance afforded these actors opportunities to embody and depict authentic stories about their communities, which they otherwise would not have been able to do. Strongholds like the American Negro Theater continued this practice into the 1940s, training actors like Sidney Poitier and Harry Belafonte.

“I think there’s this narrative, whether it’s accurate or not, that Harlem had what is essentially called the Harlem Renaissance period, and then there’s this cultural cliff that Harlem falls off of, and we don’t really hear too many stories [about it] until maybe the civil rights movement or the Black Arts Movement,” Battleground said.

The Black independent film industry continued to grow in the years following the Harlem Renaissance. As “race films” fell out of style in the 1960s, films from the L.A. Rebellion took hold, aiming to bring more social awareness to the plight of Black individuals in America. The early ’70s saw the emergence of the independent Blaxploitation—a shortened term for the phrase “Black exploitation”—film movement, which was centered on the urban African American experience.

These Blaxploitation films “offered black audiences characters, themes, music and style that was now consistent with the cultural moment off-screen,” media commentator Todd Boyd wrote in The Guardian. “The cool, sexual, powerful, conscious, irreverent, nonchalant, quick-witted demeanor of these new ultra-hip films spoke to these audiences in a language that they both understood and enjoyed.”

Blaxploitation films soon came under attack, with Black critics likening the intoxicating images of the films to “a racial sugar high” for Black audiences. Much of the creative personnel behind these films was white, thus leading to the revenue from these films being diverted away from the hands of the communities they depicted.

Hence, not only is it important to depict stories about Black culture, but it is also important that these stories be written, produced, filmed, funded, distributed, and marketed by Black individuals in order to ensure that they are told in an authentic and realistic manner that benefits the communities they depict.

With Capers’ sentiment in mind, countless film creatives have continued the vital work of the Harlem Renaissance. Jessie Maple, a cinematographer and director, fought to be the first African American woman to hold a place in New York’s camera operators union. She went on to direct “Will,” a 1981 film that made her the first African American woman to direct an independent full-length film after the civil rights movement. She also founded 20 West, Home of Black Cinema in Harlem, which served as a crucial venue for the screening of Black independent films.

A more recent example can be found in Barry Jenkins’ 2018 film “If Beale Street Could Talk,” a movie adaptation of Harlem native James Baldwin’s novel. Jenkins chose to film many of the scenes in Harlem, including at the Showmans Jazz Club on 125th Street and a townhouse near St. Nicholas Park

Today, Harlem film physically resides in two main movie houses. One is the AMC Magic Johnson Harlem 9, on 2309 Frederick Douglass Blvd. The theater first opened in June 2000 and has since remained the singular chain theater for Harlem residents despite online complaints concerning upkeep and service. The second movie house is Maysles Documentary Center, which was opened in 2008 by documentary filmmaker Albert Maysles. Maysles Documentary Center focuses on screening documentary films and curated series like Battleground’s, along with hosting forums and educational programs for the community.

Another central player in the Harlem film scene today is the Harlem Film House, which works to increase access to and opportunities for filmmakers in the community. The film house directly involves the Harlem community in the filmmaking process by hosting year-round workshops, theater productions, and live events like the Hip Hop Film Festival and Fiscal Sponsorship Program.

Harlem remains an influential player in the diverse and ever-growing field of Black American film. Building on the past and present, film in Harlem continues to push boundaries and explore the community’s stories.

“I also think that there is this idea that legacy is left to the experts,” Battleground said. “And legacy-making is left to very established, very credentialized entities. But I’m a big proponent of ‘nothing about us without us.’ And so as long as I believe Harlem is alive, then Harlem has a say in what its legacy is.”

Staff writer Irene Madrigal can be contacted at irene.madrigal@columbiaspectator.com.