Hip-hop’s presence in the 2000s and the 2010s was decidedly larger than that of the previous two decades. The golden age of the 1990s, with its diversity of sound and establishment of legendary artists, had accelerated the consumption of hip-hop culture across the country. No longer was radio its primary distributor; featured in everything from breakfast commercials and cartoons to fashion trends and movie deals, hip-hop culture, and its artists, were quickly breaking into mainstream culture.

Mainstream Columbia began embracing hip-hop as well. Over the past 20 years, scores of hip-hop performers have touched down on Columbia’s campus, ranging from golden age stars like Snoop Dogg and Ghostface Killah to relatively recent artists like Kanye West and Talib Kweli. In 2001, Raw Elementz, Columbia’s oldest hip-hop dance crew, was founded. Spectator archives contain 370 mentions of hip-hop between the years 2000 and 2009 compared to 159 mentions during the 1990s and only five during the 1980s. Clearly, Columbia students were eager to embrace the culture and some were ready to engage with it directly, both in and out of the classroom.

Anthony “Ace” Patterson, CC ’11, was one such student. Born in Bridgeport, Connecticut, Patterson was first introduced to hip-hop through his late aunt, who bought him a Snoop Dogg cassette tape when he was young. He quickly gained an affinity for Snoop’s West Coast swagger.

“I’m from the East Coast, so to have your favorite rapper be [a] West Coast artist back in the day got you in plenty of playground fights,” Patterson recalled. “I’m from the inner cities of Bridgeport … so rap is just all around. I also grew up in a Jamaican household. And it was only as I got older, [that] I learned that hip-hop was started by Jamaicans.”

Patterson’s affinity for hip-hop grew throughout his childhood, and by 15, he was selling mixtapes and performing at variety shows under the name Ace Tha Pyro. When he entered Columbua’s freshman class in 2007, he continued to pursue rapping, performing at shows across campus and traveling back home to record mixtapes with his friends. Within his first years at Columbia, he also met several people who became his musical collaborators: Mpho Brown, CC ʼ12 and a rapper from Lesotho, and producer Jon Tanners, CC ‘11. They would spend their free time planning shows, celebrating each other’s successes, and freestyle rapping together.

“[Tanners] would make us beats to perform off, and it was like, ‘Yo, what if we just did something together and actually create a group where we can do what we’re already doing,’ because we [couldn’t] be the only ones that [loved] hip-hop,” Patterson said. “There was, frankly, just a gap in the ecosystem.”

Thus, the Columbia University Society of Hip-Hop was born. Founded in 2009 by Patterson and Brown, the club was originally based in the Intercultural Resource Center, as it was not formally incorporated under the Activities Board at Columbia. Patterson and Brown were roommates in the IRC and would use the lounge and any other space they could find to host freestyle rap sessions, called cyphers, for both rappers and hip-hop fans.

“That’s the only free space we had because you had to book all of the other [spaces], but you had to be a real group in order to book,” Patterson said. “My homie Stephan, he lived in the Pike house, you know? And so we would go to the Pike basement and we [would] just freestyle. That for us was a CUSH session.” 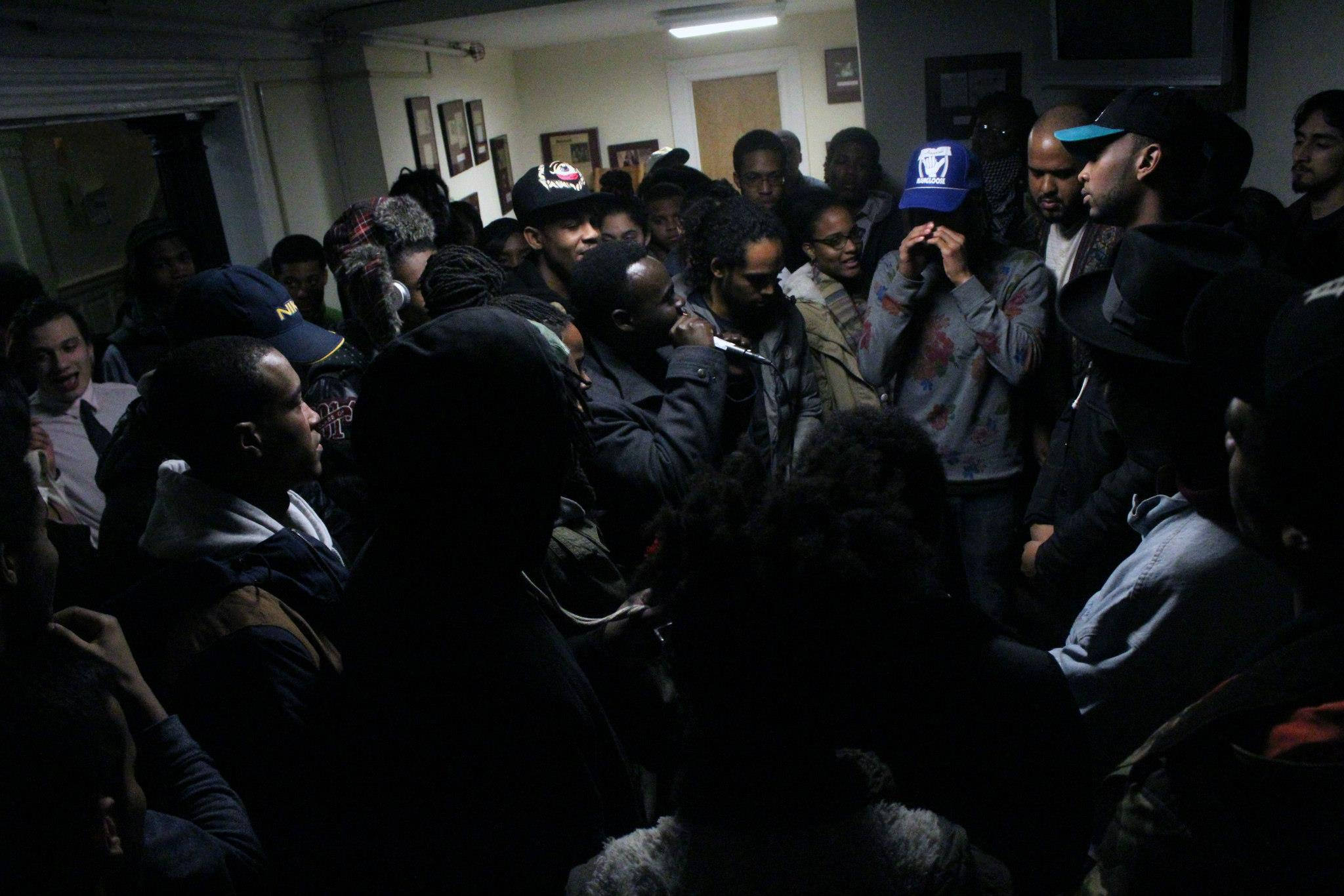 As CUSH grew in size and popularity, it quickly became apparent that the club would need to formalize its meetings. To continue with its sponsorship through the IRC, CUSH would need to include educational programming as well. One of the club’s first members, Jerelyn Rodriguez, CC ’11, played a large role in this process, leveraging her executive board experience in campus cultural organizations like the Caribbean Student Club and Grupo Quisqueyano, a Dominican student’s group.

“I kind of leaned in and took an executive committee role, and so we tried to pursue funding through the student group association and formalize it as a club,” Rodriguez said. “We established an executive body, I led the meetings, [Brown] and [Patterson] were co-leaders of the group. Once we became more formalized, we basically had cyphers every other Thursday, and then we had talks about hip-hop in [the weeks] between.”

Some conversations focused on the intricacies within hip-hop culture itself, with topics ranging from female representation in hip-hop to the cultural intermingling that occurred between Asian and Black cultures through the music. Many conversations centered around the role of hip-hop at Columbia, which often led to talks about diversity at Columbia more broadly.

CUSH began working with different groups across campus, including the Black Students’ Organization. Members were acutely aware of how different CUSH felt from the rest of Columbia’s culture, in part due to the makeup of the group.

“It was like the hub for the people of color at Columbia, and we had a lot of people from the [surrounding] community come to those meetings,” Rodriguez explained. “It was like a student club, but it was open to the public. And so it was really cool to have a diverse group of people of different income levels.”

The club continued to attract hip-hop fans and artists in droves. By the end of 2011, hundreds of people were packing the IRC lounges, eager to contribute to discussions or jump into cyphers alongside local Bronx and Harlem rappers. The result was a bona fide hip-hop training ground for young artists and hip-hop aficionados.

The musicians that came out of CUSH were unlike any that Columbia had produced in recent years. With competitive spirits and a communal love of hip hop culture, CUSH’s rappers stuck close to the learning traditions, like freestyling, that proved successful for their idols. The wider campus community began to take notice—two years after its founding, three CUSH rappers, one of them Patterson himself, alongside the brass band Lucky Chops, won Bacchanal’s Battle of the Bands and opened the show for none other than Snoop Dogg.

As students immersed themselves in hip-hop discussions and performances through the club, a new avenue for engaging with the genre emerged—a small music elective course, taught by professor Ellie Hisama, aimed to introduce students to an entirely new way of approaching the genre.

Hisama grew up in southern Illinois listening to hip-hop and classical music and acquired her doctorate in music theory in 1996 from The City University of New York. Before arriving at Columbia in 2006, she taught a graduate-level seminar called Popular Music and the Politics of Culture that included a hip-hop segment.

“I decided this is really a course that would be appealing to undergraduate students,” Hisama said. “So I created this course “Listening to Hip-Hop”, which I’ve taught five times since 2007. It’s about sounds and context and the people who make the sounds. [But] the idea behind the class is to have a course which is based in music.”

Hisama teaches hip-hop from musical, historical, and sociocultural perspectives. Students approach the class from different levels of musical literacy and learn to listen for the formal elements of music, such as meter and musical form, through classic hip-hop songs like Public Enemy’s “Bring the Noise.” Additionally, the class leans into discussions surrounding the cultural and even business contexts of the songs heard by students in class. For example, one discussion focused on the cultural and business aspects of sampling, a technique in which producers take samples of other songs and remix them into components of their beats.

Hisama credits her ability to start teaching the class to her tenured position, which gave her the institutional backing to push the envelope. Even before achieving tenure at Columbia, she recalled receiving pushback from her supervisor for including popular music segments in her music classes. Hip-hop academia specifically has had its fair share of criticism from self-appointed institutional gatekeepers—a fact that she and her students are acutely aware of.

“I used to start the class with this Wall Street Journal piece where this guy, he’s just outraged that people take hip-hop seriously and would teach it at universities,” she explained. “I start with that [to emphasize that] hip-hop has made it through the doors of Columbia in this course, and you are here.”

The class’ launch came at the perfect moment for hip-hop fans at Columbia. Many CUSH members had the opportunity to take Hisama’s class over the years, and some say that it has augmented their engagement with the music.

“We were talking about hip-hop informally [at CUSH meetings],” Rodriguez explained, “and then in class, we got to study the theory, and literally how hip-hop music is formed. And the history behind it and the business side of it. So it was a really cool moment for us.”

Hisama certainly appreciates the participation of CUSH members as well. She has had Patterson as a guest speaker in her class, who explained the intricacies of freestyle improvisation to her students. She has also had student rappers organize freestyle cyphers to discuss readings and has drawn on the knowledge of student producers to help explain the royalty system in streaming services.

Between CUSH and Hisama’s class, it appears that hip-hop has a strong future on Columbia’s undergraduate campus. Current CUSH board members Payton Johnson, CC ʼ21, Nick Rubertone, CC ʼ21, and Ty Stinson, CC ʼ21, are developing various programs that span post-graduation, including an archiving project in conjunction with Professor Hisama and the Rare Books and Manuscript Library. CUSH members have also worked with WKCR to produce the hip-hop radio show “Notes from the Underground,” airing alongside the current reigning hip-hop show Offbeat, hosted by Damon Clark, CC ʼ19, and Kiki Feliz, TC ‘19. They will continue working with Patterson, who is currently a Billboard-charting rapper and YouTube global program manager for their Creator & Artist Development team, to continue the CUSH lineage.

As for the future of hip-hop in education, Hisama has high hopes. She has worked with a number of professors and students over the years who have demonstrated a keen interest in elevating the status of hip-hop from solely popular music to an art form worthy of academic study.

Kevin Holt, GSAS ‘11 and a past student of Hisama’s graduate seminar, contributed an essay on crunk music to the Oxford Handbook of Hip-Hop, while another of her past students, Kathryn Radishofski, GSAS ‘18 and a doctoral candidate in ethnomusicology, is currently writing a dissertation on Biggie Smalls graffiti memorials in Brooklyn. Hisama herself has published numerous papers on hip-hop, including a number of her and her students’ works in the book “Critical Minded: New Approaches to Hip Hop Studies.” However, she does hope that hip-hop scholars will proceed with caution.

“I really hope that people [won’t] make it that ‘I have the right to say whatever I want about this music’ without regard to the people who originated the music and the people who are sustaining the music,” she said.