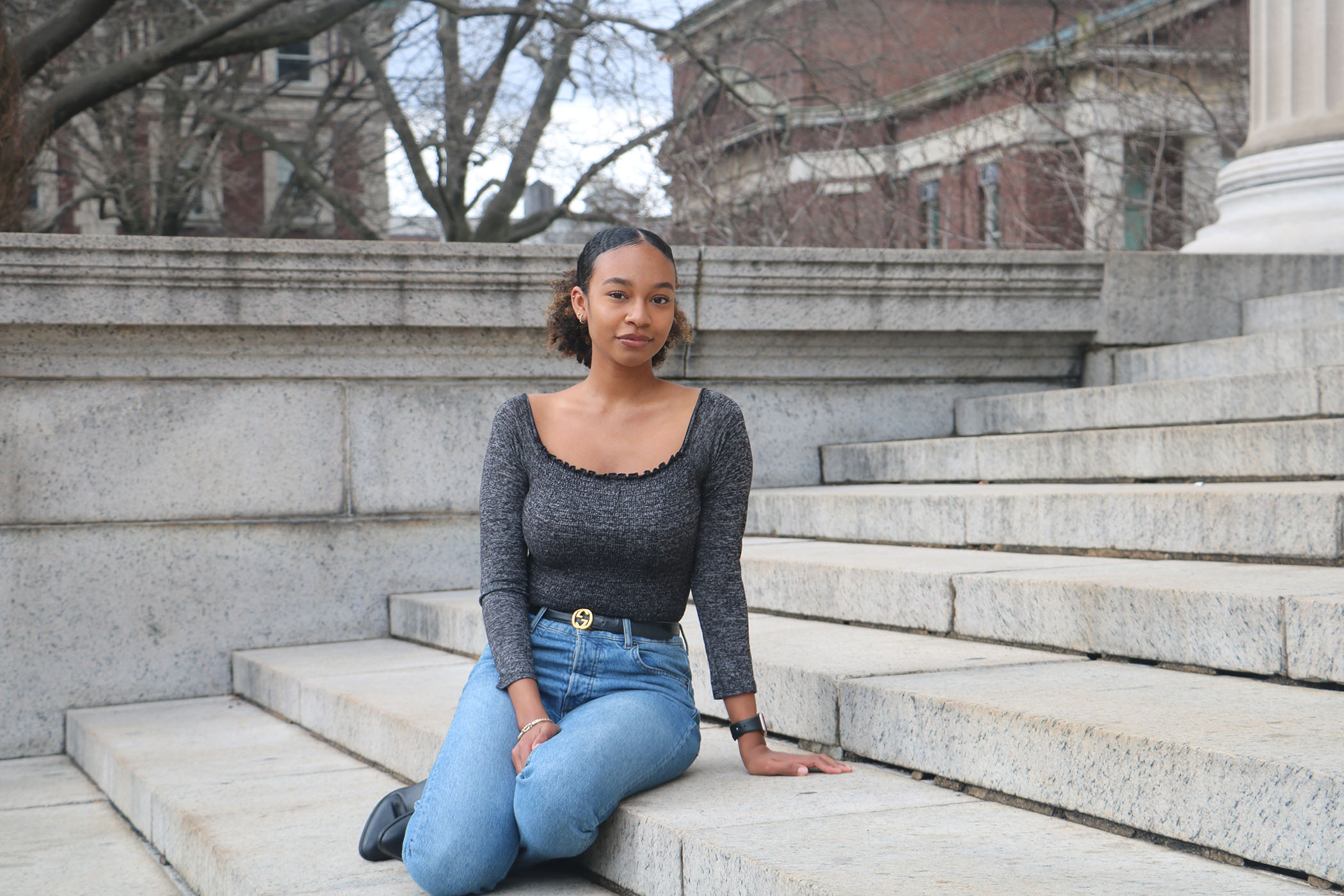 One Instagram post, podcast, and TikTok, at a time, Lauren Ritchie, CC ’22, is on a mission to redefine sustainability, amplify marginalized voices, and gain traction for an inclusive climate action movement.

Ritchie is a Bahamian climate justice activist whose platform, @ecojusticeproject on Instagram, has amassed more than 50,000 followers. Growing up on Grand Bahama Island, an island particularly vulnerable to the impacts of climate change—including the devastating 2019 category five Hurricane Dorian—Ritchie was eager to engage in the climate conversation with other Bahamian natives. Over the summer, Ritchie initially created her platform as a way to connect with Bahamian people during quarantine and to break down the stigma that there exists a one-size-fits-all approach when it comes to sustainability. In the wake of George Floyd’s death, Ritchie saw a need for an environmental justice platform that understood how racial justice, social justice, and environmentalism are naturally interconnected.

“When I go back home, there are no thrift stores. It’s very, very hard to get access to vegan meals,” Ritchie said. “We barely even have a recycling facility. So just things like that, which are so common here in New York, weren’t available there, so I wanted to be as inclusive as possible when it comes to how we talk about sustainability.”

For Ritchie, a Black woman, the environmental movement has always been inextricable from tackling social justice. As Ritchie’s platform grew and her influence expanded beyond the Bahamas, she began to foster an inclusive online community of environmentalists within a growingly exclusive sustainability movement: a space that amplifies marginalized voices and puts social justice at the forefront of the climate conversation.

“The prevalence of racism within the global community isn’t just about police brutality or discrimination within the criminal justice system. It’s everywhere. It’s in the quality of our air and water. It’s in the segregated and poorly funded communities we live in. It’s in our limited access to resources,” Ritchie wrote in an article for Brown Girl Green, a blog run by Filipina-American environmental activist Kristy Drutman.

Ritchie tries to reclaim what sustainability means—a way of living that many low-income, BIPOC communities have been engaged in out of necessity, long before shopping secondhand or being zero waste became mainstream. She hopes to foster a nuanced understanding of sustainability, one which takes context into consideration when assessing how individuals take climate action. This nuanced understanding of sustainability is something Ritchie noticed was missing at Columbia, particularly when it came to conversations surrounding sustainable fashion, such as the lack of affordable and sustainable plus-size clothing.

“I remember, there was one time, one of my friends was in an elevator in John Jay … and someone had complimented her on the coat that she was wearing,” she said. “And it was from a fast-fashion brand. And they kind of shamed her in the elevator for being like, ‘Oh, you’re wearing fast fashion; that’s not good for the planet’—without taking into account the nuance behind it, of that my friend was plus size.”

On the other hand, Ritchie also started to see a form of sustainability that felt classist. Sustainable fashion has been capitalized on by corporations and affluent people alike, transforming into a glorified aesthetic that focuses on trendy, upsold Depop outfits, rather than advocating for communities disproportionately affected by climate change.

In all of her projects, Ritchie is devoted to creating platforms that share the stories of those who have been historically silenced in matters that significantly impact them—including, but not limited to, the climate crisis. As an intern at Columbia’s Lamont-Doherty Earth Observatory, Ritchie worked on advancing diversity and equity by assisting the development of Columbia Climate Conversations, a panel series that invited well-known activists to speak on topics ranging from intersectional environmentalism to disability awareness.

As a co-host of the weekly podcast “Black Girl Blueprint,” a space made by and for Gen-Z Black women, Ritchie and her co-host Makeen Zachery, the activist behind the Twitter handle @blkgirlculture, amplify and celebrate the achievements of trailblazing young Black women. They invite special guests, which have included fashion designer Kyemah McEntyre, actress Zolee Griggs, and 14-year-old social justice activist Naomi Wadler, to appear on their podcast to honor their work and discuss what it means to be a Black woman within the spaces they inhabit.

“I think I’ve definitely seen an issue—in terms of what I’m learning in my classes—with academia being held [as] the highest standard of education or information,” Ritchie said. “I think because of that, we tend to belittle experience as a form of information or as a form of knowledge.”

Often the only Black woman in her sustainable development classes, Ritchie has had to confront spaces where marginalized voices are often not included in the climate conversation. She emphasized the importance of allyship for privileged individuals to amplify the voices of those from marginalized backgrounds in order to further the climate movement.

For Ritchie, taking climate action includes being willing to learn and hear more. However, this message applies to not only individuals but also powerful institutions, like Columbia, which have the means to create a lasting impact on both marginalized communities and the planet as a whole.

When it comes to taking action, the climate crisis can oftentimes feel like too massive an issue for an individual’s actions to have a meaningful impact. That is precisely why Ritchie is passionate about redefining sustainability in a way that does not deter people from being environmentally conscious. Ritchie’s inclusive and nuanced definition of sustainability does not scrutinize individuals for the climate actions that they are unable to take. Instead, she invites all people to incorporate sustainability into their lives in a way that is proportionate to their resources and asserts the importance of holding larger corporations accountable for their disproportionate impact on the environment.

Instead of feeling daunted by sustainable living, Ritchie wants to encourage her peers to take action by any means possible—even if the actions seem insignificant.

“Don’t feel like you’re a bad environmentalist or [like] you don’t care about the planet because you can’t fit into what the mainstream, glamorized type of idea of sustainability has become— because that’s not true,” Ritchie said.

For Ritchie, being sustainable has never been about being perfect, but about making progress.

When it comes to eating more sustainably, for example, if you are not ready to commit to veganism, Ritchie suggests instead cut something feasible from your diet.

“You don’t have to be full, quote-unquote, vegan, whatever that means … just cut out whatever feels right to you,” Richie said. “Even if that means maybe not eating meat on Mondays, or something like that, or whatever works into your schedule. But still, it makes an effort, [which] I think, is really, really important.”

In a recent @ecojusticeproject TikTok post, Ritchie spoke about the dilemma of reconciling the importance of individual climate action given the finding from CDP and the Climate Accountability Institute that only 100 companies are the source of more than 70 percent of the world’s greenhouse gas emissions. Still, Ritchie finds value in doing one’s part to make an impact on the planet.

“At the end of the day, we’re still going to keep trying, we’re not going to let it make us hopeless and make us give up, still do the best that we can, with whatever we can,” Ritchie said. “And sometimes, that gives me hope, in those moments, especially seeing mass mobilization of social and climate justice movements, it makes me feel like there might be hope. And that’s a good feeling.”