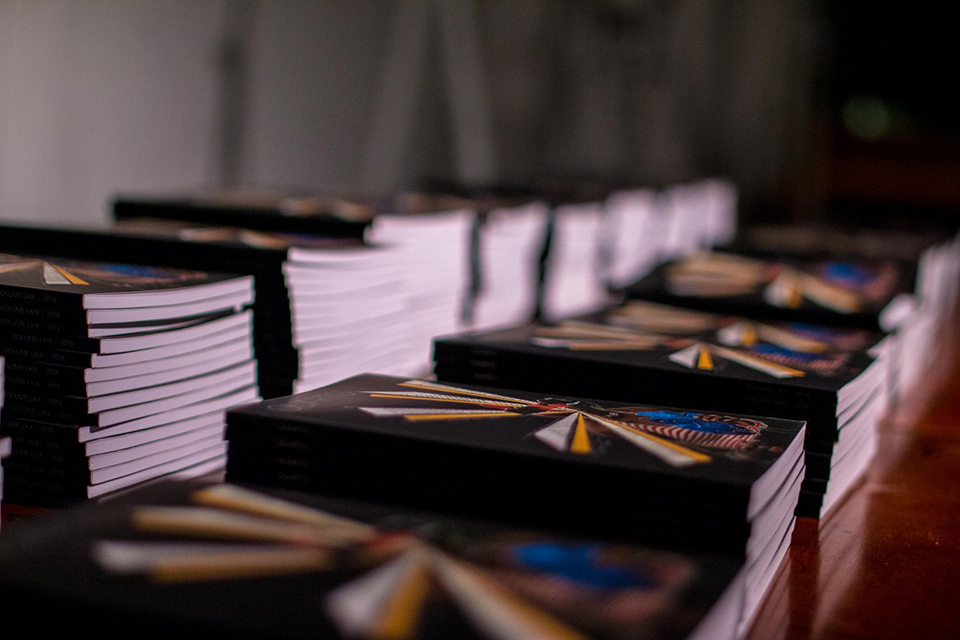 The Columbia Review, 4x4, Quarto, and the Blue and White made the most of the change from print publishing to online issues by expanding, experimenting, and extracting from their old methods.

While the past year has been disappointing for many of Columbia’s clubs in terms of opportunities and in-person collaboration, each of Columbia’s four literary publications—The Columbia Review, 4x4, Quarto, and The Blue and White—made the most of their situations by expanding, experimenting, and extracting from their old methods in order to adjust to their growing online spaces.

The magazines have found ways to cultivate a sense of community by providing platforms for both experienced and new writers from within and outside of Columbia to publish their work. Over the years, they have published writers such as U.S. Poet Laureate Louise Glück and Pulitzer Prize winner William Carlos Williams, and these magazines often act as time capsules for ambitious creatives who want to get their writing out there.

“That’s one of the things that’s so special about Quarto and other undergraduate literary magazines is that we provide a space where people can encapsulate their work at that time, and then look back, and maybe you don’t like it anymore, but we did,” co-editor in chief of Quarto Mitali Khanna Sharma, CC ’22, said.

As Quarto experienced the transition from in-person to online production, Sharma and her co-editor in chief Anna Chavez, CC ’21, wanted to focus on the mental wellbeing of their staff. Because of the distress this past year has already brought to many students, Sharma and Chavez felt a responsibility to ensure that the environment they cultivated was comfortable and did not put too much pressure on the staff editors.

“We didn’t want people to feel like it was a résumé builder. We wanted them to feel as at-home as we feel,” Chavez said.

The stress of the pandemic this past year has also had its impact on the writing of Quarto’s contributors. The editors in chief have seen submissions that reflect recent social movements, the value of human interaction, and the spaces we inhabit.

“Because people are in different locations than they expected to be, especially for school, [there’s] a lot [of pieces] about reflection and transformation and how important the spaces we occupy are to our health and our processing,” Chavez said.

Submissions will be judged by poet and spoken word artist Yolanda Wisher and writers Johanna Hedva and Hilary Leichter, SoA ’19. Wisher, the poetry judge, writes about the African American experience and is the third poet laureate of Philadelphia. Hedva, a musician as well as a writer, is judging the nonfiction submissions, and Leichter, adjunct assistant professor at Columbia’s School of the Arts and published author, is judging the fiction submissions.

“I have thoughts every year on which pieces I think are going to win each category, and I’m never right,” Chavez said. “Even though I’m pretty familiar with some of our judges’ work and their style, and I think it’s so awesome that they approach this—I don’t want [to] say opportunity, because it’s honestly an opportunity for us!”

4x4 was founded in 2013 after members of Quarto left and created a new magazine. These members felt that Quarto focused more on the undergraduate creative writing department, and the new magazine aimed to represent some of the less-represented voices of Columbia’s literary community.

These students wanted the independence to pursue and publish “the kinds of literature that they particularly valued,” co-editor in chief Anja Chivukula, BC ’21, said.

Chivukula; her co-editor in chief Chloe Arnold, BC ’21; and their team value diverse poetry and prose and weird writing. They are planning on expanding and using their website as a platform to share works of writers outside of Columbia.

In the submissions 4x4 has received from students this year, Chivukula has noticed a lot of poems about quarantine poems come through, “which absolutely mention social distancing by name, or they hint at it through a mask.” She said that 4x4 is used to seeing lots of pieces about revisiting childhood homes but that this year there were many more than usual.

4x4 will also have a panel of judges for its next print issue: poet and MacArthur Fellow Claudia Rankine, SoA ’93, and 2016 Man Booker Prize-shortlisted author Ottessa Moshfegh, BC ’02. Rankine’s “Citizen: An American Lyric” was recently added to the Literature Humanities syllabus.

4x4′s 2020 print issue was released after students were sent home because of the pandemic. At the last minute, its team held a virtual launch and mailed copies to their contributors. This year, its launch will also be online, but 4x4′s editors are again planning on printing physical copies and mailing them out to editors and contributors.

The Columbia Review is the oldest literary magazine in the United States, publishing since 1815. The magazine receives submissions from both Columbia students and outside contributors. They also have connections with other groups such as the Iowa Writers’ Workshop and are committed to reviewing work from publishers like Norton, Penguin, and small university publishers like University Press of Kentucky.

While it was disappointing to not be able to print their spring 2020 issue last year, the Review took the sudden structural change as an opportunity to build its online presence. For the website last summer, the magazine got staff members to read poems from the latest issue and they shared antiracist reading lists in light of the rise in the Black Lives Matter movement.

The editors of the Review have noticed patterns in pieces submitted this year beyond quarantine themes, such as horses, pregnancy, food, and teeth. Co-editor in chief Ryan Daar, CC ’22, likes to think that “there’s something mystical” about these patterns, and that “we actually get a slice of what people were thinking about subconsciously throughout the world.”

The Columbia Review is planning on further expanding its website, putting together a web team, and adding more multimedia projects. The editors have noticed that they have been putting on more events since the pandemic began than they had previously, and soon, they will be holding an event with the First-Generation Low-Income Network.

“That’s an example of the scope of the student groups that we are interested in collaborating with. It doesn’t have to be directly arts- or literary-related. There’s always a cool intersection that we can find,” co-editor in chief Hanna Andrews, CC ’22, said.

The Blue and White

Over the years, the Blue and White has published investigative content as well as poetry and literary columns, printing everything in blue and white ink since 1890. Now, The Blue and White’s digital monthly issues have more colorful features and digital art.

“Artistically, the magazine exploded when things moved online because the artists were no longer confined to the blue and white format,” said editor in chief Dominy Gallo, CC ’23.

This past year challenged the Blue and White’s traditional methods, but the inability to print its issues ultimately revealed how constraining its printing process was; writers were limited to word counts and illustrators limited to blue and white art pieces. The online magazine has an expanded capacity, and, as literary editor Benjamine Mo, CC ’23, said, “now that we’re all online, we feel more comfortable launching new columns.”

The Blue and White recently released its March issue which features new poetry and prose in their two literary columns “Measure for Measure” and “The Shortcut.” The magazine collected love stories from its Instagram followers in February and compiled a select few to share on their website. As part of the March issue, one of them, “Jean-Luc & I” by Isabel Gilmour, CC ’22, was shared as an animated short by assistant literary editor Kat Chen, SEAS ’24.

“I feel like the literary [section] is definitely not really considered on the periphery of the magazine anymore. That’s a big mission of ours: to really make it a more integral part of the Blue and White’s identity” said Chen.

The magazine has been sourcing literary pieces from both inside and outside the Blue and White staff. The editorial board is focusing on extracting some of the creativity from the magazine’s staff and bringing it to the forefront of the literary section.

Mo’s co-literary editor Gaby Edwards, BC ’21, looks for literary pieces that “take place in a space I’m unfamiliar with, but the writer is just so good at sketching out whatever that place is … and I trust their confidence and trust their authority.”

The Blue and White is hoping to engage with the wider literary community of the University by holding a literary showcase for every issue it releases. Other plans include the release of Chen’s AI project for “Measure for Measure,” for which she is training an AI to write like an 18th-century Romantic poet as well as a modern poet.

“It’ll be a philosophical [take] why the humanities are important and why we still need human poets,” Chen said.

In these tumultuous times, lots of Columbia students have moved to creative writing to express themselves. The Columbia Review, Quarto, the Blue and White, and 4x4 have all welcomed the increased demand for quarantine creativity. As Chivukula said, writing can “help us pay attention and appreciate the world around us, and I think that can be especially helpful during the pandemic.”