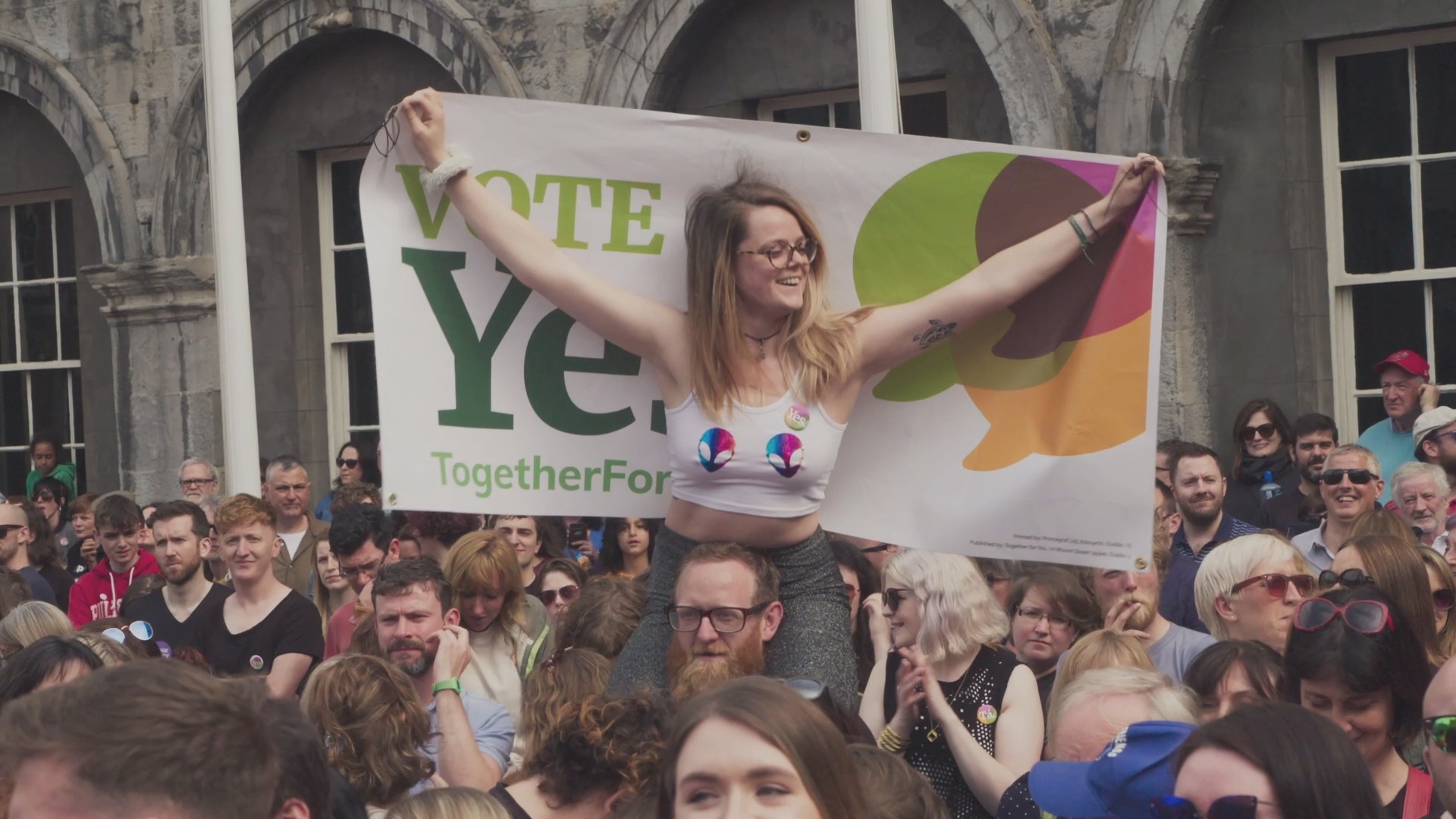 Pro-choice campaigners in the film “The 8th” approach the controversy of abortion in Ireland with a “care and compassion for women,” which contrasts with the belief of pro-life campaigners that abortion kills lives.

An older woman confronts a young female protester about her pro-choice beliefs at a “Repeal the Eighth” rally in Dublin, Ireland. The young woman explains to her, “I’ve been brought up in a different time to you. I’m not religious, so that side of it isn’t important for me. It’s about being able to do what I want with my body.”

The older woman says “But it’s not your body, it’s God’s. He created you.”

In 1983, the people of Ireland voted to add the Eighth Amendment to their constitution, which gives the unborn an equal right to life to that of its mother. Since the vote, abortion rights activists have fought to overturn it and expand reproductive rights. “The 8th,” a documentary directed by Aideen Kane, Lucy Kennedy, and Maeve O’Boyle showing at the 2021 Athena Film Festival, takes a behind-the-scenes look at the historic 2018 referendum in Ireland that repealed one of the world’s most restrictive laws on abortion.

Heartbreaking tragedies, such as the 1992 Attorney General v. X case of a 14-year-old rape victim who was denied an abortion by the courts and the death of Savita Halappanavar after being denied an abortion in 2012, led to the country’s cultural shift from a conservative stance on abortion to a more liberal stance.

The film follows the pro-choice campaigners Ailbhe Smyth, a veteran in the women’s rights movement, and Andrea Horan, a self-described “glitter and glam” activist. The two managed to pull off one of the largest grassroots campaigns that Ireland has ever seen: Together for Yes.

“[Kane] and I grew up under the shadow of the Eighth Amendment. We grew up in a society where the Catholic Church had a very strong presence,” Kennedy said. “As Ailbhe Smyth, the main protagonist of the film sort of mentions, before January 2018, it was hard for people to even say the word abortion.

“The Roe v. Wade ruling had come through in the States in the ’70s, and there was a real fear of a sort of liberal judiciary in Ireland,” Kennedy said. “They were trying to compromise any possibility of that happening in Ireland.”

Although “The 8th” includes interviews and footage from the pro-life side of the debate, the primary focus of the documentary is on the pro-choice movement’s significant shift to a “softer, more value-driven” strategy of “care and compassion for women.” This strategy ultimately brought them success in the 2018 referendum when 67 percent of the Irish population voted in favor of repealing the Eighth Amendment.

“The situation we were working in was with a society where the word ‘abortion’ in January 2018 was a no-no, which indicates the depth of self-censorship, prohibition if you like, internalized prohibition against abortion,” Smyth said in the film. “So, of course, we have to go gently. To roll in there any other way would have been mad.”

One of the most powerful scenes in the film comes from an interview with Praveen Halappanavar, husband of 31-year-old Savita Halappanavar who died days after suffering a miscarriage at University Hospital Galway in 2012. He claimed that she had sought a termination after being told that the baby would not survive, but the doctors refused.

“The doctor said, ‘Unfortunately the fetus is still alive and it’s a Catholic country and we won’t be able to terminate,’” Praveen Halappanavar said. “On Saturday, things had really started getting worse. They were trying to pump her heart and the minute the doctor saw me, she said, ‘We are losing her. She is dying.’”

The next scene shows a candlelight protest in Dublin with over 10,000 people in attendance. Some protesters hold up signs that read, “Never again,” and others hold up signs that read, “Women’s rights = Ireland’s shame.” A woman yells into a microphone, “This government needs to introduce emergency legislation to protect women’s lives. And if they don’t, we will bring this government down.” The camera lingers on the scenes of the protest, letting the viewers understand the impact that Savita Halappanavar’s death had on the country, and the outrage sparked by the injustice.

This same outrage ultimately became a massive turning point in the fight for reproductive rights in Ireland. At the time that the case happened, a number of scandals involving the sexual abuse of children within the Catholic Church also surfaced.

“People had really started to distrust the church and politicians,” Deidre Duffy, a campaign manager for Together for Yes, said in the film. “And because of the diminishing influence from the Church, people were much more likely to listen to what the abortion rights movement had to say.”

The film then cuts to a group of young women dressed as the “handmaids” from Margaret Atwood’s dystopian novel The Handmaid’s Tale, a novel that explores subjugated women in a patriarchal society. At the time of this demonstration, the Hulu television series of the same name had reached worldwide popularity, which mirrored the rise in popularity of “repeal the Eighth” in Ireland.

“You could hear that silence being broken as there was a gradual coming to consciousness,” Smyth said. “And then, you know, as often happens in those situations, people try to put it back in the box again, but it keeps opening. Like Pandora had said, look at the poisons that there are in your society. Look at them in the face. Don’t turn away. This is the truth. This is the reality. This is the cruelty. This is the brutality.”

Ultimately, the end of “The 8th” becomes a celebration of the success of the decades-long fight for reproductive rights in Ireland, and that, no matter how long it takes, justice is attainable.

The film ends on an inspiring note with Smyth celebrating the successful repeal of the Eighth Amendment with her family. She reflects on the decades of work she put into the pro-choice movement, and what she has learned from her experience.

“The struggle is not over. You don’t win everything at once,” Smyth said. “But I now understand after 50 plus years, that the revolution doesn’t happen overnight. But we’ve made a huge step here. … It is actually in its way revolutionary. I’m very glad to know that our daughters and granddaughters will be alright.”