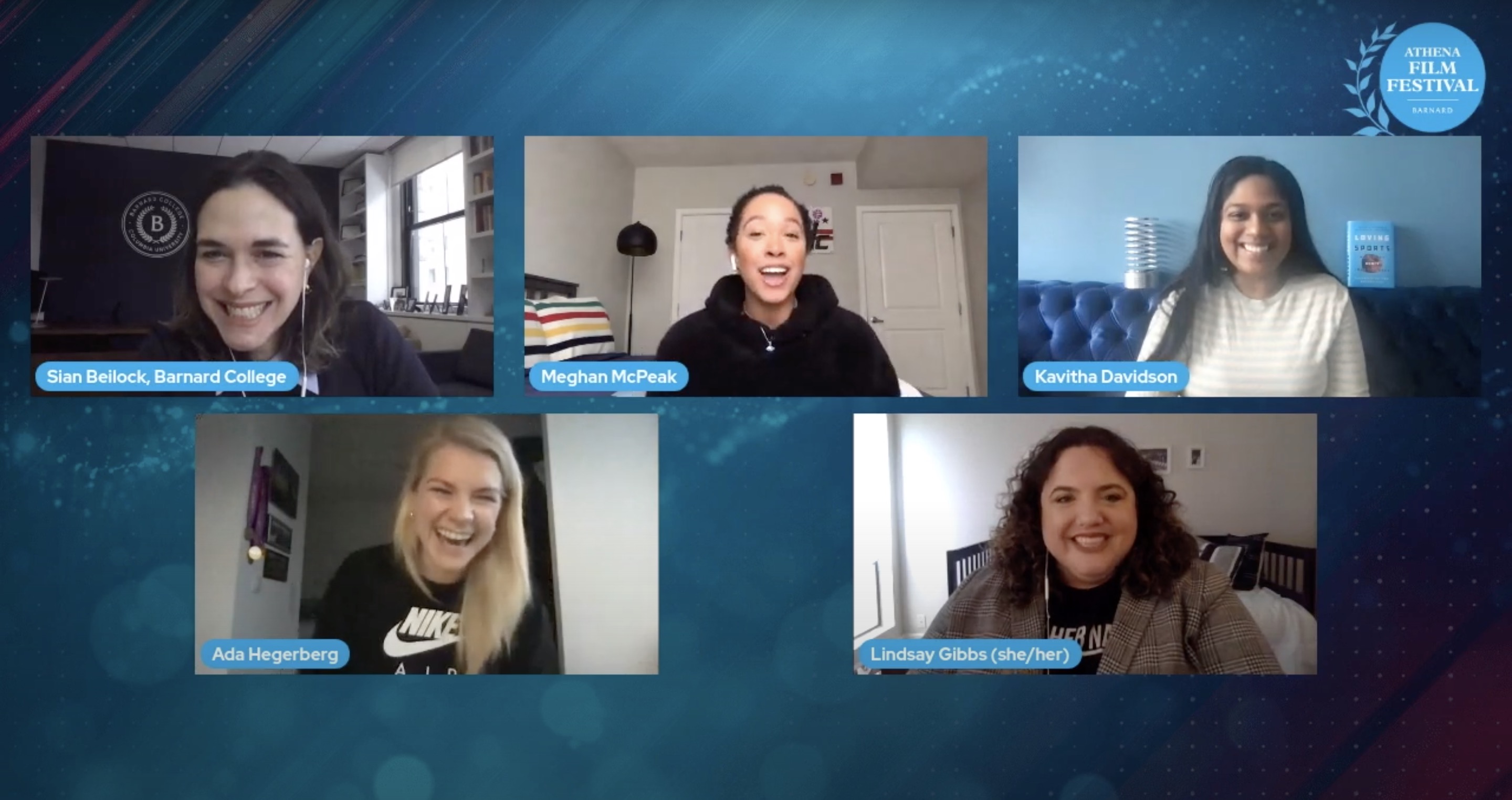 With a new generation of athletes like Ada Hegerberg, Marta Vieira da Silva, and Naomi Osaka, activism in sports has shifted in a new direction. Female athletes have risen to the front lines of many protests, ranging from struggles for equal pay in sports to police brutality and racial injustice.

In the panel “How Women Athletes Are Leading the Way on Gender Equality and Racial Justice,” hosted by the 11th annual Athena Film Festival, four women with extensive careers in sports explored how female athletes are engaging in activism. The panel was moderated by Barnard President Sian Beilock, an amateur football goalie and a cognitive scientist specializing in the science behind pressure during high-stakes situations.

Meghan McPeak, a basketball broadcaster and the first woman in 30 years to call an NBA game, kick-started the discussion by commenting on the rise and consistency of female athlete activism across sports and leagues.

“When you look at women athletes and activism in sports, you typically see the conversation start with what the men are doing,” McPeak said. “What I want people to realize is female athletes have been at the forefront of this conversation in the last few years.”

McPeak also spoke about the need for equal media coverage, noting that only about four to six percent of sports coverage is dedicated to women and that women only account for 13 percent of all sports reporters and editors. When it comes to sponsorships, women’s athletics make up one percent of the total.

Lindsay Gibbs, a sports reporter and co-host of the feminist sports podcast “Burn It All Down,” agreed that it is crucial to hold publications and news media accountable for ignoring the stories and experiences of women athletes and reporters. In her newsletter “Power Plays,” which dissects the sexist, racist, and transphobic power structures that dominate sports, Gibbs keeps a tally of women’s sports stories covered by newspapers on the series “Covering the Coverage.”

Gibbs also added that the sexual harassment of women in sports and sports media must be given more attention and reported on more frequently. Importantly, she mentioned that reporting on sexual harassment was how she met her podcast co-hosts.

“A lot of us were covering issues of sexual assault and domestic violence and receiving a lot of abuse from that. So we became a support group through a Twitter thread and ended up being like, ‘We should really start our own podcast,’” Gibbs said.

Gibbs emphasized that the movement for gender equity in sports is not just restricted to activism by American athletes, as demonstrated by the women’s national football team in Spain that exposed its coaches for misogyny at the 2015 World Cup.

“Women in sports are inherently activists [from] the very fight to get onto the field, to get funding from their nations, to get support,” Gibbs said. “The fights look a little bit different out everywhere, but I think activism is ingrained into the fabric of women’s sports.”

Kavitha Davidson, CC, a sportswriter for The Athletic and former columnist for espnW and Bloomberg, and Spectator’s sports editor in 2008, identified the lack of equal financial investment from governments and leagues as the main barrier to equal access to sports, which she emphasized “is a human right.” She criticized those in power who justify giving women’s sports unequal air time due to the belief that they will not attract a large viewership.

“There’s long been an attitude by the men who are mostly making the programming and marketing decisions, that men’s sports will continue to make money, no matter what happens. Women’s sports are too much of a financial risk to take,” Davidson said.

“We are seeing a huge cultural shift that is frankly backed up by the money,” Davidson said. “I think that these people have realized … betting on women is a smart bet.”

Norwegian football phenomenon Ada Hegerberg, who scored 282 goals in 271 games throughout her club career, spoke of how girls were not held to the same expectations as boys were by parents and coaches.

“[Boys] were allowed to be pissed if [they] lost. There was screaming at trainings. … I get so frustrated [seeing] young girls spending 30 minutes playing around, joking around, trying to get the cones and the goals in place,” Hegerberg said. “And when you see the boys, everything is organized from minute one. I think that young girls also want to be taken seriously, and we also have to put demands [on them].”

This year’s Athena Film Festival also featured a film about Hegerberg’s monumental decision to boycott the 2019 Women’s World Cup due to unequal treatment of men’s and women’s teams, titled “My Name is Ada Hegerberg” and directed by Jackie Decker and Tim Mullen.

As a final note, Gibbs reminded people to remember the importance of racial inclusivity in the sports world; the WNBA, for example, has only one Black female coach and no Black female team owners, and in the Women’s Super League for football, Black players have felt disconnected from their non-Black teammates.

The panelists agreed that the power structures within sports, particularly women’s sports, need reform on multiple fronts and that the movement has a lot of potential. As female athlete activism continues to pave the way for gender equality, the conversation must also broaden to tackle the elimination of racism and transphobia. According to Gibbs, women’s sports “has a rare chance” to eradicate systemic issues that continue to keep female athletes on the sidelines of important sports conversations.

“It’s about getting leaders at the pitch, taking good decisions, pushing federations, pushing clubs. … You need to push for change in everything, and that’s what we’re going to continue to do,” Hegerberg said.