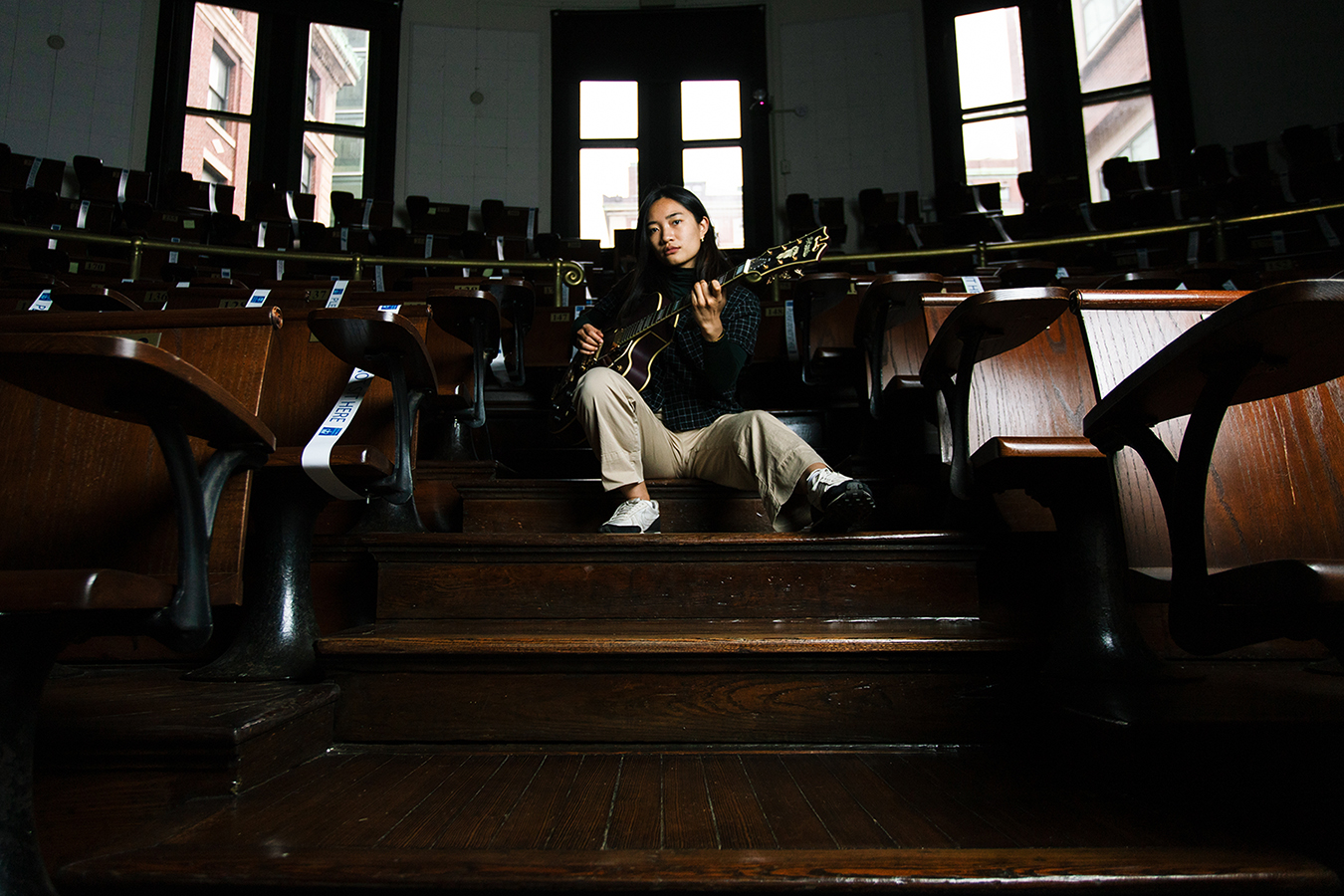 Stephanie Chow, CC ’23, otherwise known as Wilchai, navigates the tension between what we remember and the truths of our past realities in her somber debut single, “Deluge.”

Stephanie Chow, CC ’23, has always loved music, whether as a listener or a musician. Although she began playing music on a plastic violin—as, in her words, “toddlers are disastrous”—Chow, who sings and produces under the moniker Wilchai, has taken a big step up from her humble beginnings by releasing her debut single “Deluge” on March 5.

“Deluge” is characteristic of music’s new hyper-connected age in which no sound previously defined by locality or community is out of bounds. Wilchai is a gay Asian American woman from the heart of the Midwest whose music combines elements of R&B, indie pop, soul, and jazz. A Miles Davis poster hangs proudly in her room, and she has been booked to open for pop singer Clark Beckham and rapper Gucci Mane.

Possibilities for inspiration abound, Wilchai took her time finding the best way to combine her influences and musical experience into a style that allows both her individual creativity and appreciation for the past to shine. Finding her own niche among this synthesis of influence, genre, and musical background took years of experimentation.

“A lot of the past one or two years have been me trying to figure out my sound before I start putting out a lot of stuff,” Wilchai said. “I feel like I’m starting to find my pocket in the area in between soul, R&B, and a little bit of indie-pop.”

The production of “Deluge” reflects the intersection between her experience as a jazz musician and her musical influences, which include Frank Ocean, Madlib, and SZA. The song’s compressed, staccato percussion is reminiscent of modern hip-hop production, and guitars smoothly layer over each other throughout the track. Wilchai says that much of the production was inspired by the clean and lush sounds of jazz and neo-soul music.

As a songwriter, Wilchai views music as a communicative art form wherein day-to-day experiences can play out through sound and poetry. This stems from her background in jazz, a musical genre that boasts a unique back-and-forth solo tradition.

“My songwriting experience is pretty based around my personal experience but it’s a lot about how I reflect on my interactions with other people,” Wilchai said. “I came up playing jazz which is inherently … an exchange. You solo, someone else solos.”

“As my grandma was getting more sick, I found myself trying to remember her,” she said. “It was really difficult because I had these really vivid memories, but I was seven and I don’t know if they’re real or how much of it is what my family told me about her.”

Following many lines in “Deluge,” Wilchai plays two guitar notes which transpose the tone of the final words in the line—as if the sentiment she has sung is fading into the background. Moments like these fully manifest Wilchai’s ethos in the single’s creation as she explores the divide between the truthful reality of past experiences and the mutable forms those past experiences become in memory.

“Deluge [is] a pretty introspective song but it’s still about my relationship with the world at large,” Wilchai said. “[A lot of the lyrics] are reflecting on memories about your memories of yourself and other people and how over time they change, they develop, and sometimes they dissolve.”

In the song’s chorus, Wilchai contemplates her lack of familiarity with her grandmother: “Where did you go/ It’s hard to grieve for someone I don’t know/ Deep in deluge.” This inability to see her ailing grandmother inspired Wilchai to use “Deluge” as a makeshift journal to “spill her thoughts on the page.”

“You get a lot of time to just sit and reflect and try and figure out who you are, versus who you were,” she said. “Writing [”Deluge”] has helped me kind of come to terms with the fact that our memories aren’t perfect. We might not have a solid sense of self yet, but it’s OK for it … not to be completely concrete.”

Part of the composition of “Deluge” was Wilchai’s collaboration with featured artist Unathi Machyo, BC ’24. Wilchai discovered Machyo on Columbia a cappella group Nonsequitur’s Instagram page, where the group announced its new roster. She reached out to Machyo, and the two sent initial chord progressions and vocals stems back and forth. Eventually, they realized that there was potential for the creation of a song.

Wilchai says that the collaborative effort that created “Deluge” was “super exciting” and “gratifying.” Now that her first song is officially released, Wilchai can take a step back and appreciate what she has produced.

“I’ve played music with a lot of people, but ironically, [releasing my first song] cements your sense of self when you’re like, ‘Oh, this is a piece of me and it’s out there and people are able to enjoy it,’” she said.