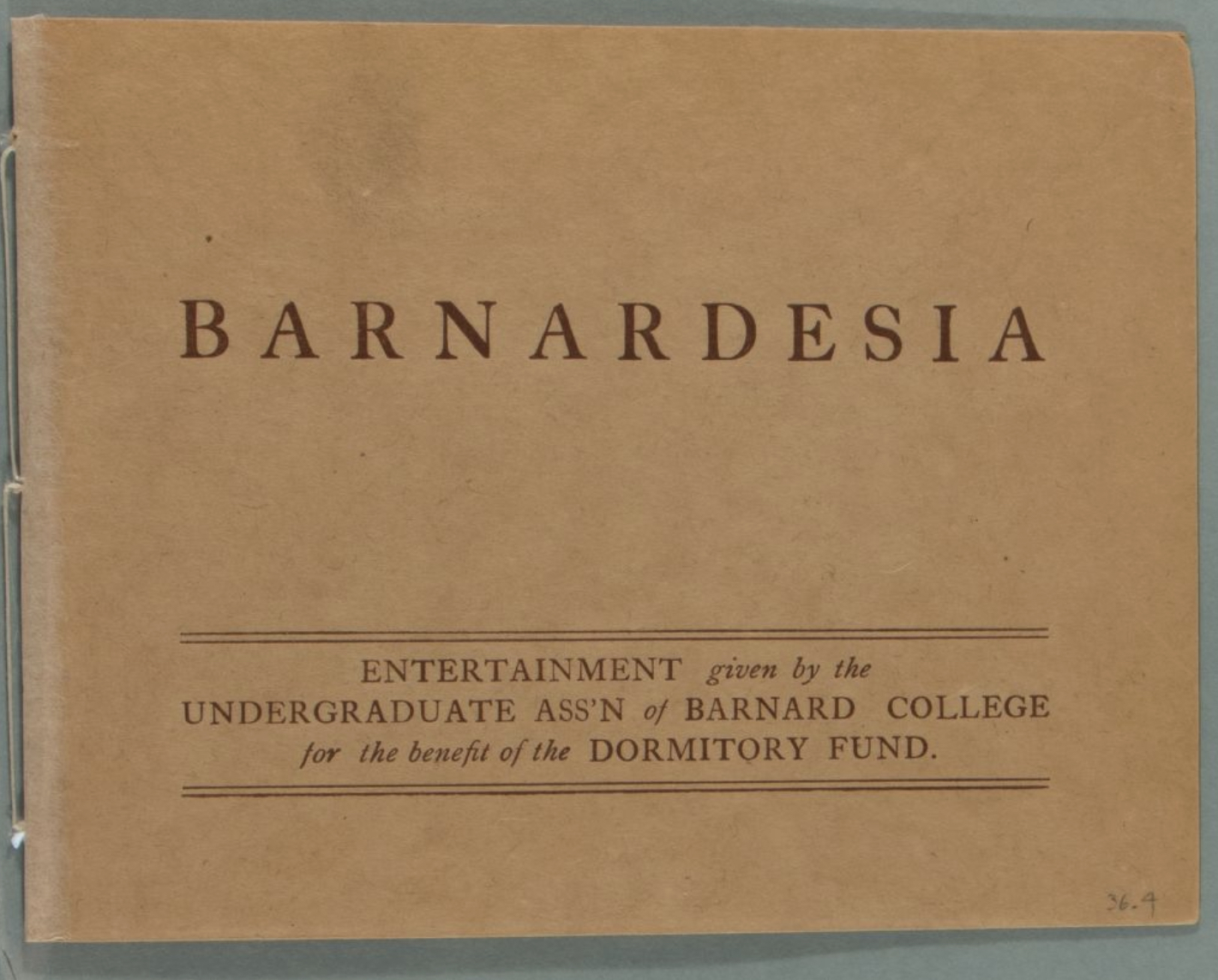 Over a century ago, Barnard commissioned actress and interior decorator Elsie de Wolfe to furnish a newly built Brooks Hall. Known for designing the Colony Club, she brought in chintz, silks, and mahogany antiques—all the trappings of the gaudy New York elite—to attract wealthy students to the college from out of town. Only a year earlier, the very idea of a residential hall on campus seemed unimaginable to students, let alone one with Wolfe’s over-the-top parlor décor. That is, every student except for Barnard senior and amateur playwright Edith Somborn Isaacs, BC 1906.

In spring 1906, Isaacs co-wrote and produced the satirical operetta “Barnardesia” with her friend Blanche Marks. The play was a spoof on University life, as well as a fundraising soapbox for Isaacs. Ever since Barnard’s sole, temporary dorm, Fiske Hall, had reverted back to a lecture hall in 1902, campus emptied every evening as students scattered across the city. It was only after Isaacs mobilized theater lovers that Barnard’s campus finally became a home.

At the turn of the 20th century, theater productions at Barnard were often fundraising events. Local advertisements crowded playbills, promoting everything from freelance pianists to ice cream depots—usually followed by a sprawling postscript of patrons and patronesses. Revenue from undergraduate productions provided rainy day savings for the college and its notoriously fragile finances.

Isaacs was on the editorial board of the Barnard Bulletin at the time, while serving as chairman of the Undergraduate Play Committee. In January 1906, the editorial board printed a plea for students to donate to the dormitory fund. Then, in March of that year, after a disappointing number of student contributions, the Bulletin ran a series of exasperated letters from the undergraduate and alumnae divisions of the Dormitory Committee.

“These girls do not seem to realize that dormitories are, perhaps, the most potent factor in college life and, therefore, of vast importance to every undergraduate, whether she be resident or not,” wrote chairman Elsa Alsberg, BC 1902, of the alumnae branch.

After months of asking for money, the Dormitory Committee decided to shift tactics. In mid-April, the Bulletin announced a new committee called “Barnardesia and the Lawn Fete,” with Isaacs acting as chairman. She promoted the event as dancing in Brinckerhoff Theatre—now the Minor Latham Playhouse—to be followed by open-air refreshments. She also, unsurprisingly, called on every student and alumna to comb through their respective networks for patrons.

Three weeks later, the Undergraduate Association presented “Barnardesia” to a “large and enthusiastic audience,” according to the Bulletin’s review. Set to a collaged score of once-popular musicals like “Toyland” and “Humpty Dumpty,” Isaacs’ operetta satirized Barnard as a small, overly bureaucratic kingdom. The cast of characters included King Collegium of Barnardesia; Princess Freshnelda; and Officio, the secretary and grand filer of applications to the king. In addition to co-writing, stage managing, and chairing the play committee, Isaacs also appeared as an “attendant of [the] Princess.”

In a review of the performance, The New York Times described a charming, somewhat ridiculous evening of puns, kicklines, and velvet-heavy costumes. Beyond the rather uninspired couplets and the objective silliness of the choreography, the play addressed two sober topics: the need for student housing and the inaccessibility of performance spaces to Barnard students.

“Barnardesia” was not just light entertainment—it was an administrative tactic. Isaacs had organized a political function, cashing in on years of stereotypes depicting female students as frivolous and decorative. She was, after all, the future wife and campaign manager of a New York City politician. Isaacs invited Barnard’s board of directors and solicited “subscriptions” from the likes of W. K. Vanderbilt, itemizing checks for the dormitory fund.

One “Miss Gill”—Laura Drake Gill, the Barnard dean—was particularly sympathetic to the cause. She wrote to Isaacs, requesting two front-row seats for herself and an anonymous donor. Recounting the event after almost 70 years, Isaacs wrote:

“Several days later Miss Gill called me to her office and told me that our special guest was giving us the funds for our dormitory, but wished it to be anonymous. This was, as you can imagine, a thrilling moment for me.”

Isaacs’ “special guest” was none other than Elizabeth Milbank Anderson—heiress to a condensed milk company fortune and longstanding patroness-extraordinaire to both Barnard and Teachers College. After listening to Isaacs’ fundraising plea at intermission, she decided to donate $100,000 for a permanent dormitory. By the fall of 1907, Brooks Hall had opened its doors to 56 undergraduate tenants.

Fifty years later, the Barnard Alumnae Magazine printed a photograph of a tiny stage cramped with students dressed in royal and academic regalia. There was a small poem beside it—almost a footnote:

“Perhaps 1906′s greatest claim / To be enshrined in the Hall of Fame / Was our production of ‘Barnardesia…’ not only did we raise 1400 beautiful dollars… / But when the heroine appealed for a dorm as part of the show, / Mrs. Anderson, seated in the very front row, / Opened her purse and gave us the dough.”

Somehow, after years of student-led campaigns—of redirecting funds away from campus groups and entreating undergrads to dip into their own pockets—a goofy operetta finally built Barnard’s first dormitory.